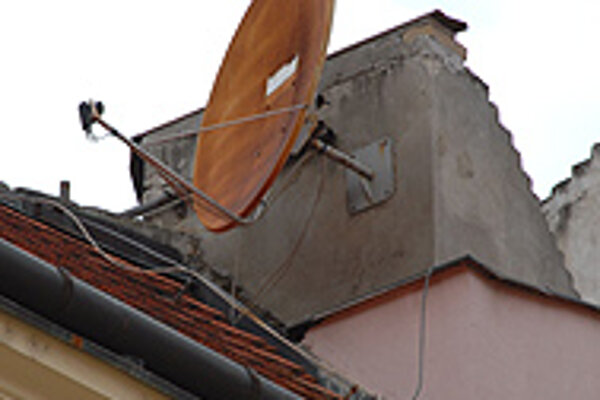 But despite the rapid decline of fixed lines that followed as the result of the Globtel and Eurotel (now T-Mobile) mobile network operators consuming the market, Slovak Telekom stayed in the game. But now, with its decision to offer the 'triple play' service, it has a new competitive advantage in its fight for customers.

Triple play is a service that provides a high-speed internet connection, television and telephone over a single broadband connection.

Only Slovak Telekom was willing to publish its number of triple play subscribers. It already has around 1,700 subscribers and thousands of applications are still being processed, said Slovak Telekom spokesperson Michal Korec.

"The Magio box can replace a DVD player and VCR, as well as satellite and cable TV," he told The Slovak Spectator, explaining the biggest advantage of the service.

When ordering Homebox, clients need three devices: A Set-Top-Box, Livebox and a Converter. Altogether, they cost from Sk268 (€8) for rent-to-own, and up to Sk24,043 (€713) for the full price. Homebox has 28 TV channels in its basi

Slovaks are especially interested in digital television because it has better image and sound quality and a wider range of functions compared to the older analog and cable TV services. Clients can set up repeated recordings of their favourite series, block unsuitable programmes from children, pause and replay a programme (shift play) and use an electronic programme guide.

However, the choice of films is limited at the moment: Homebox currently offers only 36 films, Magio 80.

Orange's Homebox is still in its testing phase, and is expected to widen its digital TV offerings in the coming months. And it is not just the digital TV services that will improve. Orange is to invest more than Sk1 billion (€29.6 million) in the coverage of the service, so that the service will be available for about 200,000 households.

Currently, only residents of Petržalka (part of Bratislava) and the towns of Trnava and Piešťany have access to Homebox.

Magio is currently available in 10 Slovak towns. In Bratislava, it reaches 100,000 households.

Even though the services provided by Magio and Homebox may seem very similar, there is one significant difference - how the signal is delivered to the customer. While Slovak Telekom uses copper cables, Orange has optical ones.

Optical cable is no thicker than a hair and is connected to the client's converter machine, which produces a digital signal for output to a TV. The spokesman of Orange, Peter Tóth, described it as the most progressive method of transporting data in the world.

"Optical thread has such a vast capacity that it could cope with the internet usage of the whole of Slovakia," he told the Slovak Spectator.

For clients, that means they can download a four-megabyte song in a couple of seconds. The capacity of the cables is limited by Orange to 30 megabytes per second.

Tóth said a larger capacity might be too much for some computers, but theoretically, Orange could offer 100 megabytes per second as the capacity is practically unlimited.

Although the internet speed provided by Magio is only 1,024 kilobytes per second, Orange's download limit is 100 megabytes, while T-Com offers six times more.

The UPC cable service company was the first company to offer voice, data and internet as separate packages through a single connection in September 2006, and eventually merged all three into a single triple play package on April 2.

However, they offer an analogue television service, not a digital one, and it is only available in Bratislava.

"Customers won't have to buy set-top boxes," he told The Slovak Spectator. Customers who are interested in the triple play service only need a modem to have it installed. The price of a set-top-box starts at around Sk4,000 (€118).

There are also local triple play providers - Micronet in Bratislava and Antik in Košice. However, the competition on the market is strong - Orange and T-Com are planning on upgrading their services.

While T-Com wants to enable chat or playing games in their television service, Orange is looking even further.

"We are just a step away from applications like video consultation with a doctor or e-learning through television," Tóth said.