THE INTERNET keeps changing our lives. E-mail killed the postman, and ever since companies offering free calls over the internet appeared, telephone service providers have also been added to the list of endangered communication species. 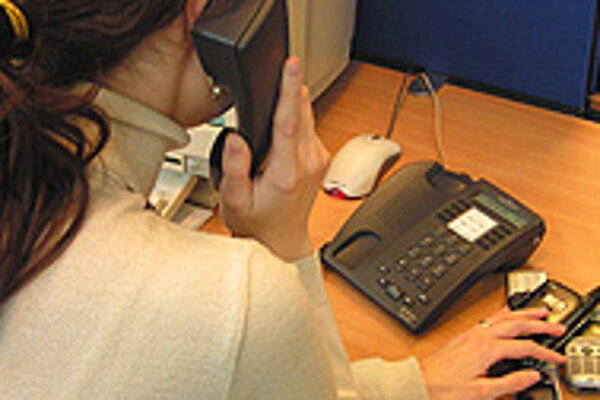 Font size:A-|A+0
THE INTERNET keeps changing our lives. E-mail killed the postman, and ever since companies offering free calls over the internet appeared, telephone service providers have also been added to the list of endangered communication species.

Skype has become one of the best-known brands in the communication technology world after only four years of operation. Today, people can connect with anyone using the same software in any corner of the world for free, or, rather, for the price of an internet connection. The prediction that free internet calls will gradually replace fixed telephone service is often heard, and the telecommunications industry seems to echo the opinion, said Jana Burdová, a spokeswoman for Slovak Telekom.

Free internet calls are one communication alternative; however they can never fully replace traditional communication services when it comes to comfort, availability and additional services, Richard Fides, the Media Relations Manager for Orange Slovensko told The Slovak Spectator.

"People simply want to make or receive a call at a certain moment, no matter where they are at that moment," Fides said. "In this matter, a PC connected to the internet is not an alternative."

Mobile phone communication is easy for any customer since no special settings or technical skills are required, Martin Vidan, a T-Mobile external communication specialist told The Slovak Spectator. The voice quality, the speed and the stability of the connection are guaranteed, he said. Besides, with a mobile phone people have access to a number of other services such as SMS, MMS, call forwarding, etc., Vidan added. Internet calls do not offer this variety of advantages when using a PC because of the PC size, the restricted availability of fast mobile internet connection, the fees for data transfers abroad and other reasons, he said.

"Using software on a computer is nowhere near as comfortable or convenient as using a mobile phone," Vidan said.

Free calls - not just on the internet

"Certainly, internet calls bring more competition and impact the business of fixed phone operators," Burdová said. "The revenues from analogue services are sinking every year." However, the decline is not as dramatic as in the years 2001-2005. In 2006 and in the first quarter of 2007, the decrease in voice services levelled off, she said.

"Customers who lost interest in fixed phones have already cancelled the service," Burdová said. Slovak Telekom is not looking for a fight against VoIP calls; in fact, the company itself has been offering products that include VoIP calls for more than a year, Burdová said.

With more advanced internet connections, the quality is no longer an important difference, she said.

With the internet calls, voice quality often depends on the type of connection.

While DSL, cable or optical connections usually guarantee stability, wireless (such as microwave or mobile) connections remain unstable, she said.

"In the near future, however, new technologies will guarantee the quality and the necessary transmission speed," she said.

According to Burdová, new competition and the addition of mobile and VoIP calls to the telecommunications market have pushed down the prices of fixed services. A number of Slovak Telekom's products for business and home include certain times of the day or week when calls can be made for free.

"If free calling is attractive to consumers, they will find this feature on their fixed phones as well," Burdová said.

Of course, users are not restricted to a single form of communication, and many use both fixed and mobile phone services as well as internet calls such as Skype, she said.

With the low internet penetration in Slovakia, Skype's market share is not that considerable. The situation at the moment is that VoIP is more popular in countries with higher telecommunications services fees, like the USA or Poland, said Richard Fides.

"But eventually, calls will probably move to the IP networks environment, of which the public internet is a part," Fides said. "For this reason, no operator can forget the importance of the internet. The development of these kinds of services is part of the plans of most telecommunications operators."