A YEAR AFTER his hit gorefest Hostel raised millions at the US box office and the ire of a nation of Slovaks, American writer/director Eli Roth is back for the release of the sequel, Hostel: Part II, which opens worldwide on June 8. 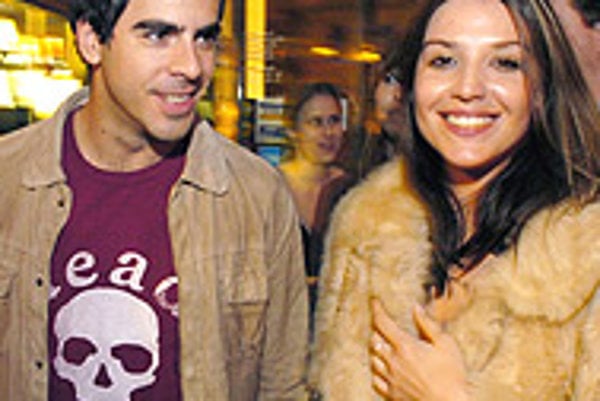 Font size:A-|A+0
A YEAR AFTER his hit gorefest Hostel raised millions at the US box office and the ire of a nation of Slovaks, American writer/director Eli Roth is back for the release of the sequel, Hostel: Part II, which opens worldwide on June 8.

Early reviews are falling along party lines, with hardcore horror fans hailing it as a darker, more exciting, and more artistically mature sequel to the original, and the faint of heart dismissing it as more of the same.

"I wanted to build on the strengths of the first [Hostel] and take it to another level," Roth told the American magazine Entertainment Weekly. "My favorite sequels are Aliens and Road Warrior and The Empire Strikes Back - sequels where you went, 'Oh my God, that was so much better than the first movie'. That was the goal."

But whatever the body count of Hostel: Part II, or the expertise with which it was filmed, Slovaks, from moviegoers to politicians, are likely to be confused and frustrated as to why, after all the controversy the original film created last year, Roth insisted on again setting the film in Slovakia.

"It's like Borat and Kazakhstan," Roth said, alluding to last year's bombshell mockumentary starring British comedian Sacha Baron Cohen. "[T]heir tourism increased 30 percent! In Borat, the joke is on the Americans. And that's what it is in the Hostel movies: the people in Slovakia are just letting it happen."

But the Slovak public didn't buy that argument last year, and is equally unlikely to do so this time.

"I am offended by this film," MP Tomáš Galbavý (SDKÚ), a member of the parliamentary committee on culture, told BBC News after last year's premiere of Hostel, adding "I think that all Slovaks should feel offended. This monstrosity that does not at all reflect reality ... damage[s] the good reputation of Slovakia".

The Slovak Spectator's request for an interview with Roth or representatives from his production company, Raw Nerve, went unanswered.

In the original Hostel, two American college students backpacking through Europe are lured to a hostel in Bratislava with promises of what every stereotypical young guy dreams of - beautiful women who live to please. Little do the Americans know the hostel is actually a torture dungeon in which rich clients pay to watch victims suffer and die.

Adding insult to injury, as far as Slovaks were concerned, were images in the film that portrayed Slovakia as a poor, backwards outland in which gangs of kids roam the streets, harassing foreigners for a few coins or pieces of gum.

As for details about what exactly the sequel holds, Roth began by explaining in an interview with film industry magazine Production Weekly that Hostel: Part II will pick up right where the last film left off.

"The first Hostel is a journey into hell that starts off fun," Roth said. "Part 2 is going to start off scary and stay creepy all the way through. I want it to feel like the movie is going to pick up on the next cut, as if you could watch the two movies back-to-back and it would be a three-hour movie."

Hostel: Part II will have some differences in plot, albeit minor.

"I'm writing Hostel 2 for girls - it's going to be three girls this time," Roth said for MTV. "They're studying in Italy for the summer, and they get lured, and they go back to ... well, we're going to go back to a lot of familiar places."

The sequel will reveal that the hostel in Bratislava is in fact one in a chain of torture dungeons throughout the world, and that one massive organization is actually running them all.

"It's all part of the organization," he continued. "They've got the whole thing set up all over the place, and they have different scouts. "We're going to learn a lot more about how it all works. In Hostel 2, you're really going to see the ins and outs of the whole organization and how they get people and kill them."

The Slovak Spectator will continue to follow the story of Hostel: Part II and the Slovak public's reaction to it. Look for further articles in the coming weeks.