As if the windstorm wasn't bad enough...

THE BATTLE over the removal of fallen trees from the Tichá and Kôprová valleys in the High Tatras mountains has been passionate but confusing, with foresters and environmental activists presenting conflicting facts to back up their arguments. 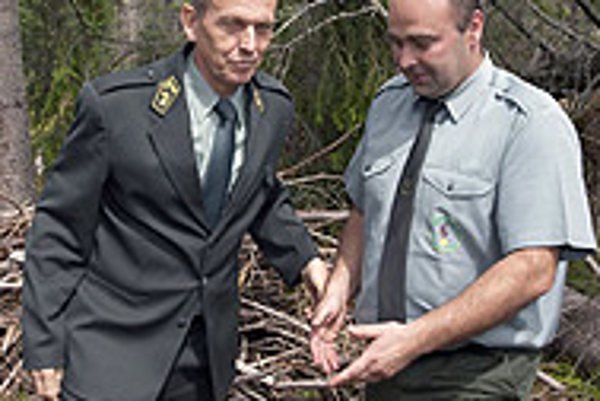 Font size:A-|A+
THE BATTLE over the removal of fallen trees from the Tichá and Kôprová valleys in the High Tatras mountains has been passionate but confusing, with foresters and environmental activists presenting conflicting facts to back up their arguments.

The Slovak Spectator confronted Peter Liška, the head of forest administration in Tatras National Park, with several claims made by environmentalists against the removal of fallen trees from protected areas following the calamitous windstorm in 2004, which destroyed up to 25 percent of the park's forests. Liška claimed the truth was being twisted.

The Slovak Spectator (TSS): Environmental activists argue that there is no longer any sense in removing fallen trees from the Tichá and Kôprová valleys, because the bark beetles that infested them have mostly departed. Is this true?

Peter Liška (PL):The bark beetles have not departed these valleys, and some remain in the fallen trees. Those that flew away in 2006 have already attacked up to a thousand healthy trees near the windfall area, where they have multiplied, and in 2007 they will spread and attack further healthy trees in these valleys. We predict that with each nesting, the bark beetles from one tree attack and kill five healthy trees. Given the good weather that we have had this year, we expect to see two bark beetle nestings before the end of the summer.

TSS: If the situation is so serious, how do you explain the resistance that removing the logs has aroused? Because it hasn't come only from environmental extremists, but also from hundreds of academics and state officials, as well as the European Commission.

PL: I regard these challenges to the removal of fallen trees, which is our most effective tool in fighting the bark beetle infestation, as the natural agenda of some extreme environmental non-governmental organizations. Unless they create constant conflicts and fight with enemies they invent, they would not be publicly visible, and I expect they would not be able to raise money so easily.

Foresters are ideal enemies that hold out the promise of a long-term conflict, because under the Forestry Act they are responsible for protecting forests and preserving their health. Since 2003, the mouth of the Tichá and Kôprová valleys has systematically been prepared as a conflict area, given that environmental activists knew that the forest in this area has been significantly affected by human activity in the past, and that leaving them without human intervention now would turn them into hotbeds of bark beetle infestation for the whole valley, which foresters cannot permit. The Tatras are also a topic that is very popular with the media.

As for the opinions of academics, on the website of the forestry division of the Tatras National Park, www.lesytanap.sk, you will find much more support for the acts of foresters among academics and professionals, but very little is written about this, probably because it would clear up the problem.

TSS: Juraj Vysoký, the Slovak representative of the World Wildlife Fund (WWF), quoted you as follows in the Sme daily on May 17: "The director of the Tatras National Park forests administration, Peter Liška, said in September 2006: "At the moment it no longer makes any sense for us to insist on the issue of exemptions for the processing of windfall logs. The speedy removal of these damaged logs made sense only as long as the bark beetles were still under the bark. Now that they have already left the trees, there is not point in hauling these logs out of the forest." You say he took your words out of context, but the quote seems fairly clear.

PL: I was talking only about those areas of the valleys that are currently under the fifth, or highest level of protection, where the state forests administration had asked the environmental authorities for exemptions in Tichá and Kôprová valleys to allow them to remove windfall logs so we could prevent a bark beetle catastrophe.

Until 2004, when the windstorm happened, we had the bark beetle infestation in this area under control, and we did not allow it to turn into a disaster and start destroying living forests. If exemptions had been issued for areas under the fifth level of protection before March 2006, we would have been able to stop the bark beetle catastrophe in these valleys in its tracks. But given that these exemptions still had not been issued by the summer of 2006, the multiplying bark beetles began to spread beyond the windfall area and to attack live trees, so it was clear to me that we could no longer prevent a bark beetle disaster, and that there was no longer any point in carrying on a pointless struggle with the environmental authorities to be allowed to intervene in the area under the fifth degree of protection.

Our current activities are being carried out in the area under the fourth level of protection, which is permitted under the Nature Protection Act, and which is required under the Forestry Act. The aim is to create a buffer zone between the area under the fifth level of protection, where the bark beetle will spread uncontrollably, and lower-lying healthy forests. Our job is to take every measure we can against the bark beetles to prevent the healthy forest from dying. The bark beetles will spread very quickly from the fifth zone, as we can predict from its extent - 8,000 hectares out of an overall 9,200 hectares in the valleys.

In my opinion, the Tatras National Park is conducting a huge, and hugely risky, experiment with Slovakia's mountain forests. At a time when countries around the world are together trying to reduce greenhouse gas emissions, we are going to allow millions of healthy spruce trees to die, even though these trees are excellent accumulators of carbon dioxide. For whatever reason, we weren't satisfied to have 12,600 hectares of Tatra forests destroyed by the windstorm.