Slovaks spend the night in museums and galleries

THERE SEEMS to be some hope for the renaissance of museums in Slovakia as the country took part in the third annual Europe-wide Night of Museums and Galleries on May 19. 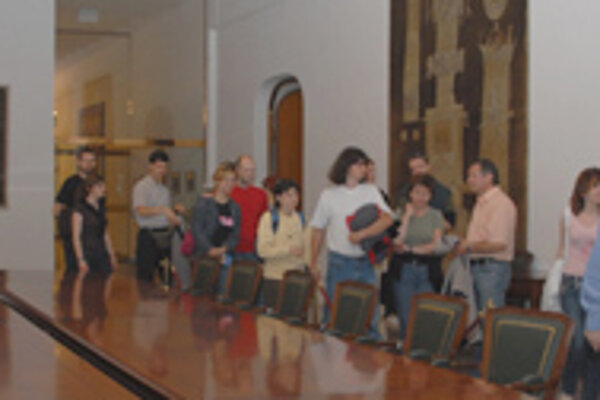 Font size:A-|A+0
THERE SEEMS to be some hope for the renaissance of museums in Slovakia as the country took part in the third annual Europe-wide Night of Museums and Galleries on May 19.

In Bratislava alone, around 33,000 people visited 24 museums and galleries, many of which remained open until midnight, project coordinator Jana Chrappová told The Slovak Spectator. While in 2005 only 5,000 people symbolically spent the night in galleries and museums, last year the number rose to 16,000.

"We are glad that this exceptional event is gaining popularity," said Chrappová. "Every successful year motivates us to prepare better for the next one. We certainly want to exceed the level of 50,000 visitors in 2008."

As in past years, the Natural History Museum and the Museum of History, both of which are affiliated with the Slovak National Museum (SNM), and the Transport Museum attracted the most visitors in Bratislava.

The Natural History Museum owes its popularity to its educational aspect and programme, which includes lectures and workshops for children, said Chrappová.

After the last year's success, the museum opened its anthropological collection to the public again. While last year it offered only two tours showing skeletons, bones and two Egyptian mummies (one from the 7th - 6th century BC and the second one from 1500 BC) being studied by SNM scientists, this year the visitors had access from 17:00 to 22:00.

The Bratislava castle is one of the common destinations for visitors during the Night of Museums. The castle's extensive renovation plans and the prospect of seeing the premises used by the parliament for ceremonial purposes sparked visitors' interest. People stayed in the castle gardens enjoying the flood-lit castle until midnight.

Attractions at the castle included the Renaissance chapel, which survived the blaze that caused great damage to the castle in 1811, and the hall where US President George W. Bush and Russian President Vladimir Putin held a press conference after their summit in 2005.

The 1811 blaze left only the castle's outer walls unharmed and, due to years of neglect, the historical site had to wait until the 1960s before it was rebuilt and given its current form. For many this was the first opportunity to see these premises decorated in the Social Realism style, which celebrates the working class. Some visitors were surprised as they had expected the premises to have a more 'historical' design.

Two thousand people took advantage of the opportunity to see the SNM's new premises on Žižkova street, which houses three museums - the Museum of Hungarian Culture in Slovakia, the Museum of Carpathian German Culture, and the Archaeological Museum. Chrappová said that the number of visitors significantly exceeded their normal expected turnout for Saturdays.

People also found their way to the Museum of Croatian Culture in Slovakia in Devínska Nová Ves, which organised a programme of Croatian wine-tasting for the occasion.

The Slovak National Gallery (SNG) prepared lectures, dances and workshops for the visitors.

"The SNG is known for its creative and quality workshops that it organizes to better explain the exhibitions to visitors," Chrappová told The Slovak Spectator.

Many museums and galleries outside Bratislava joined in the event as well. Trenčín's premiere Night of Museums and Galleries was a success. Trenčín Castle was the most visited site with over 2,300 visitors. In Košice, people were able to visit the Miklušova Väznica prison and the Slovak Technical Museum. After last year's success, the medieval town of Kremnica opened its Museum of Medals and Coins, which had a programme for children, but the mine had the most visitors.