SLOVAKIA MADE the most of its role as host of the Conference of the Speakers of European Union Parliaments, said Slovak Speaker of Parliament Pavol Paška. 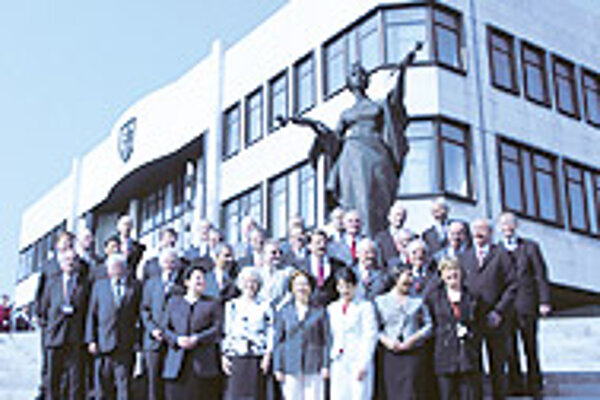 Font size:A-|A+0
SLOVAKIA MADE the most of its role as host of the Conference of the Speakers of European Union Parliaments, said Slovak Speaker of Parliament Pavol Paška.

"The Conference of Speakers of EU Parliaments in Bratislava was an opportunity to present the country after three years of membership in the European Union as a proper member, and we made use of it," he told The Slovak Spectator. "We proved that we are also a country that can bring our own national positions to the European agenda. Bratislava has been inscribed with golden letters into the history of the European parliamentary tradition."

The conference was held in Bratislava from May 24 to 27. More than 40 top representatives of legislative bodies from 27 member states of the EU came to Bratislava, as well as representatives from Croatia, Turkey, the Former Yugoslav Republic of Macedonia and Ukraine.

On the agenda for the conference were issues like inter-parliamentary co-operation, helping the parliaments of new democracies, and Ukraine as the eastern neighbour of the EU.

The Conference expressed its support for Ukraine's ambitions for EU integration. It also called on Ukrainian political leaders to follow democratic principles to solve the acute political crisis in their country.

Paška said that because Slovakia shares a border with Ukraine, it closely monitors developments there.

"It is very important for us that Ukraine, as our important neighbour and partner, continues the way of democratization," he said. "It is also important from the point of view of Slovakia's goal of entering the Schengen area, where cooperation with the Ukrainian side will become absolutely crucial."

A long-running power struggle between Ukrainian President Viktor Yushchenko and Prime Minister Viktor Yanukovych came to a head in the week leading up to the conference. The issue was resolved in the middle of the conference when the two rivals agreed to hold early elections in September.

Alexander Moroz, Speaker of the Ukrainian Parliament, interrupted his visit to Bratislava for one day to attend to the matter. After his return, he said the crisis was over.

"It is important that we finally return to the legal sphere in solving problems," he told the Slovak Television public broadcaster on May 27.

Shortly afterwards, he told the conference that Ukraine still wants to become a member state of the EU.

"We need a clear prospect of entry," he said.

Norbert Lammert, the Speaker of the Bundestag (German Parliament), said pro-integration statements alone are not enough for EU entry.

"Politicians fighting for power prefer private interests to common democratic values," he said in Bratislava. "Just to proclaim willingness to enter the Union is not enough. Observing its rules is a must."

Another key issue was the European Constitution. Paška told The Slovak Spectator that he was optimistic a solution to the current quagmire could be reached, saying he agreed with a statement Lammert made at the conference.

"He thinks we cannot forget the stance of the majority - the 18 countries which have ratified the Constitutional Treaty," he said. "On the contrary, we have to take them into consideration. If we want to proceed, we will not be able to hover in one place forever ... and detain the whole process because of some minority stances. These stances are legitimate, however they are hampering the whole process of the European Union."

Grigorij Mesežnikov, the president of the Institute for Public Affairs non-governmental think-tank, told The Slovak Spectator that the conference fulfilled its basic goals. The main one was communication between national parliaments of EU countries, or countries that are candidates for joining the EU, he said.

"It was not the mandate of this conference to solve the EU's problems," he said. "That would be inconceivable."

"But I think that the conference did demonstrate some of these intentions," he continued. "Really important things were discussed, even the continuation of the constitution process. These things help create a common European political space."

The conference was also significant because it created a new system for assigning the conference presidency, Paška said. The presidency will now be held by the country that presides over the European Union in the second half of the year.

"In this way, Bratislava inscribed itself in European parliamentary history," he said.

The Conference of the Speakers of European Union Parliaments is the highest official form of inter-parliamentary co-operation in the EU. It was founded in 1963 and has been held annually since 1975.

The Slovak Republic took part in the conference for the first time in Athens four years ago, as a country joining the EU.