PLASTLINE Nova, a Slovak company that produces industrial plastic hoses for the agriculture and building industry, has modernized its production and boosted sales thanks to EU funding. 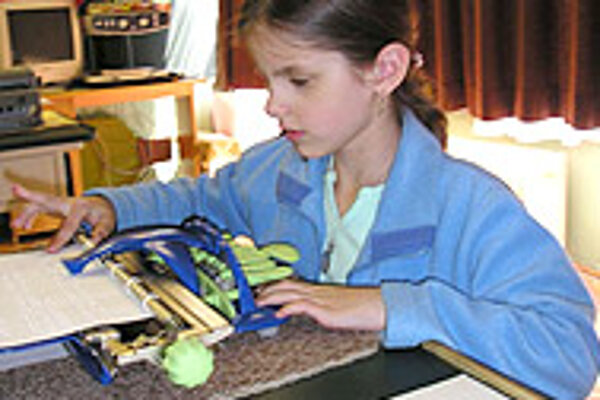 Font size:A-|A+0
PLASTLINE Nova, a Slovak company that produces industrial plastic hoses for the agriculture and building industry, has modernized its production and boosted sales thanks to EU funding.

The manufacturer's success story is an example of how European funds can contribute to the development of businesses in former Soviet-bloc countries that are still trying to shake off the effects of a centrally-planned economy.

EU funds can do a lot to help a struggling industrial business get off the ground, but the challenge of how to draw on and use these funds still remains. Is Slovakia taking on and overcoming this challenge, or is Plastline Nova just an exception?

Another Slovak firm that successfully applied and received EU funding is Švec a Spol, a company based in the town of Vráble in the Nitra Region. Švec a Spol is the only developer and producer of braille typewriters in Slovakia and an important exporter for the industry worldwide.

Švec a Spol was established in 1993 and focussed on metal-working and engineering products. But now, with the help of EU funds, Švec a Spol has found a way to keep its competitive edge by purchasing new technology and expanding its product line to include writing aids for the blind.

"The company really needed the technology but there was no way we could have afforded it," said Ľubomír Švec, general manager of Švec a Spol. "The company found out that it was eligible for the grant and the management developed a project with the help of the First Contact business advisory centre."

Švec said the funds helped them start production sooner and led to increased and higher quality production at the same time as creating new jobs in the Nitra Region.

The Trnava Region's Regional Development Agency has had experience supporting the creation of projects aimed at helping the Region's development. Most of the projects in the public sector deal with infrastructure, including communications, schools and social facilities, said Rene Steiner, the agency's project manager. The private sector projects are mostly focused on the purchasing of equipment, the transfer of technologies from the west to the east, the building of production halls and the opening new of plants.

Steiner said that what a project needs if it is to succeed is: "A great, sustainable and pursuable idea and, of course, preparation."

Jana Murínová, spokesperson for the Slovak Investment and Trade Development Agency, said that the projects must fulfil the formal, technical and professional requirements that have been set, while also being relevant and fulfilling the expectations of quality, sustainability and cost effectiveness. There are also some financial requirements, such as the applicant having the financial resources necessary to co-finance the project, Murínová said.

Applicants often say that it is not possible to prepare a project that will be eligible for EU funding without having access to a wide range of information, but Steiner said that anyone who is really interested in it will be able to find the information they need.

"Individuals and companies can always turn to us," he said, though he admitted that there can be difficulties in the process of getting aid from EU structural funds.

"The process is definitely very time-consuming and demanding in terms of administration," Steiner told The Slovak Spectator. "But the government has been making efforts to simplify the process."

"The problem also lies in the lack of administrative capacities," Anna Palkovičová, spokesperson of the Economy Ministry, told The Slovak Spectator. "This is a country-wide problem for Slovakia and should be solved on a state level in cooperation with the European Commission."

The administrative barrier did not seem impassable to Švec, who said he believes there is a good reason for all the documentation and paperwork.

"The bureaucratic burden becomes much heavier later, when the application is waiting for the European Commission's decision," Švec told The Slovak Spectator. He added that decisions on applications for funding have never been made on time, which can cause problems when it interferes with the deadlines one has set for a project.

Steiner said it is difficult to make a general evaluation of the success of applications for EU grants because 20 projects worth Sk10 million might be rejected but then a project worth Sk40 million could then be accepted.

"We are striving to push through all of our projects," he said. "You might easily receive a letter that says that your application was successful but that it has been put on a waiting list due to a lack of funds."

In spite of all the problems that could come up, those involved in the application process agree that the positive effects of EU structural funds on Slovak industry are undeniable.

"The structural funds have had a significant effect on the development of the country and its economy, mostly when it comes to adopting innovative technologies and methods," Palkovičová said. "In Slovakia we will be able to see the results five years after the projects have received the money."

Švec says that the funds are indeed a good boost for firms with clear ideas and plans.

"It is the company's responsibility to stick to its own plans," Švec said.