THOSE WHO strolled through the towns and villages nestled below the Malé Karpaty (Small Carpathians) on the sunny day of May 26 might have come across some good-tempered people with a glass of wine in their hand and a green label around their neck. 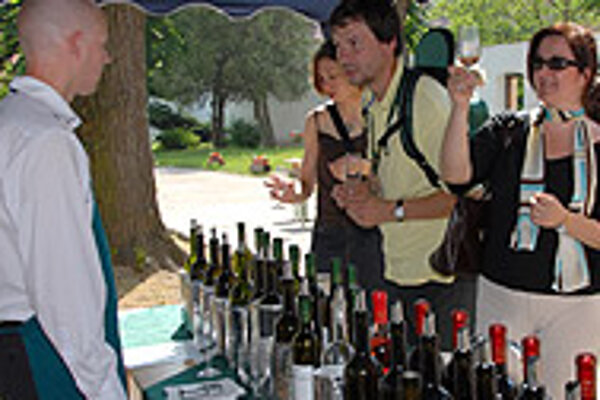 Font size:A-|A+
THOSE WHO strolled through the towns and villages nestled below the Malé Karpaty (Small Carpathians) on the sunny day of May 26 might have come across some good-tempered people with a glass of wine in their hand and a green label around their neck. These were the attendees of the first spring Day of Open Wine Cellars, enjoying their tour around 81 wine cellars, some of which were hundreds of years old. More than 110 wine producers offered a taste of their delicious wine products from last year's exceptionally sunny season.

Because demand for the November Day of Open Wine Cellars exceeded availability, wine makers added a spring event to the calendar. The cellars from Bratislava to Trnava on the Small Carpathian Wine Route (Malokarpatská Vínna Cesta - MVC) opened to the public just a day after St. Urban Day, which celebrates the patron saint of wine growers.

The number of visitors was a bit lower than originally expected. "Probably this was because the temperature was above 30 degrees Celsius that day," Jarmila Dudová from the MVK Society told The Slovak Spectator. Another reason might be the fact that the spring event lasted only one day, compared to two days in the autumn. Nevertheless, the MVK Society deemed the event a success, and plans to repeat it next year.

"The visitors were very approving of the fact that many of the wine makers served the wine themselves and talked with the tasters," Dudová said. People were also more likely to buy the wines and take them home due to the hot weather.

Compared with the autumn event, the offering of wines was much more diverse. "Each winemaker offered 10-12 varieties," Dudová said. This was because the wines from last season have already ripened. During the autumn Day of Open Cellars, wine makers presented mostly young wines, which only indicate whether wine makers were able to overcome the challenges of the latest season. But with many varieties of wine, makers have to wait until May to see whether they succeeded.

On May 26, the more seasoned wine tasters rented a car with a driver or asked a friend to be a designated driver and take them along the route.

Wine makers often used this opportunity to personally meet with tasters and talk with them about wine in general, or specifically about the wines they offer. This was the case of Eduard Brychta, who presented his wines in the cellar of the Obecný Dom in Rača. He was particularly proud of his Frankovka Modrá. "Empress Maria Theresa appreciated this sort of red wine," Brychta told The Slovak Spectator.

In Svätý Jur, the Kautzovská cellar, which is some one hundred years old, was worth visiting. Its vast vaulted space with a large barrel that holds more than 5,300 litres breathed with history and offered pleasant shade from the hot sun outside.

To present its wines, the Pereg company used the garden of the Schaubmar mill, which serves as exhibition premises for the Slovak National Gallery. As well as a unique spirit, the garden offered shade beneath the trees, refreshment and a nice, family atmosphere. Mario Hrozek and others from the company personally selected the wines to be tested for groups of visitors and with great care explained the individual varieties and vintages. Contrary to other wine cellars, the Pereg company presented only wines of a vintage older than 2006.

Hrozek paid special attention to black currant wine. As he explained, this was a wine of our grandfathers, who used to make it sweet and strong, which caused a cruel hangover the day after. The Pereg company continues in the tradition of producing black currant wines, but with a lower alcohol content. "Demand is high," Hrozek told the Spectator.

Fedor Malík, a renowned Slovak wine expert, also offered his products for tasting. In his cellar below his family house in Modra he also revealed a special wine called Sahral Noir. As his son Fedor explained, the first part of its name can be translated as 'He Played,' and is a mixture of a variety of wines - Cabernet SAuvignon, HRon and ALibernet - left to mature in a barique barrel.

As a cherry on the cake, the wine testers found at the end of the route one of the best wine producers in Slovakia, Víno Mrva & Stanko. Its wines are known for their fresh, fruity flavour and the maker's progressive attitude: wine production starts in the vineyard.

One person probably could not have visited all the cellars on the route and tasted all the offered wines. Those who wish to try have to wait until November 16-17, when the cellars open again.