No surprises expected at HZDS congress

THE MOVEMENT for a Democratic Slovakia (HZDS), which has been led by Vladimír Mečiar since its inception, is meeting for a party congress that promises no big surprises. 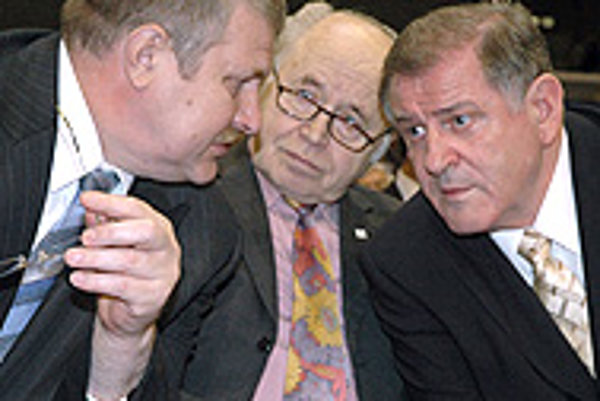 Font size:A-|A+0
THE MOVEMENT for a Democratic Slovakia (HZDS), which has been led by Vladimír Mečiar since its inception, is meeting for a party congress that promises no big surprises.

Though political scientists say that the HZDS has always been 'a one-man show' or, more precisely, the personal party of its controversial leader Vladimír Mečiar, there will be two candidates running for the top post: Mečiar and be his loyal ally, Viliam Veteška.

The latter has justified his candidacy for media by quoting the sinking popularity of the HZDS and the party's results from the last elections.

"It would have been better if we had reached the promised 20 percent," Veteška said on the Markíza TV channel on June 3. "I was the only one who saw his own popularity rising; the others' is decreasing. If we close our eyes and keep shouting that we are successful because the HZDS is a ruling party we will just be deceiving ourselves."

Neither Veteška's party boss Mečiar, nor the HZDS' other vice-chairman, Milan Urbáni, agreed with him.

"Veteška cannot solve the problems he mentioned - he cannot boost the preferences and popularity of the HZDS," said Urbáni. "In this respect, Mečiar has always been more successful. Veteška is only serving his own ambitions. I don't understand him - why now, when the HZDS is a successful and respected coalition party?"

Grigorij Mesežnikov, a political scientist and president of the Institute for Public Affairs think-tank, does not think that Veteška's victory would help the HZDS.

"Even though the HZDS has been losing its voters, Mečiar still manages to address his voters better," Mesežnikov told The Slovak Spectator.

Political scientist Miroslav Kusý also told The Slovak Spectator that Veteška has had practically no chance of getting elected. Kusý said he does not think that Veteška's potential success could prevent the HZDS from losing votes.

According to Kusý, the HZDS managed to pull itself together thanks to the fact that it became part of the ruling coalition last summer.

"Mečiar pulled himself together when Fico chose him for his team," Kusý said. "He simply got the chance to rule. But his people want to see action, they want to see that he is fighting for them, that he wants to give them positions, offices."

Like Kusý, Mesežnikov is not only sceptical about Veteška's chances, but also of the chances of the HZDS in general. He said that it is quite probable that the HZDS will not get into parliament in the next elections.

"I am not sure that Veteška is the one who could halt this trend," Mesežnikov said. "The HZDS has been losing voters for several years and yet it still does not offer any reasonable options. The party representatives do not strive for a change of image or for any innovation in their agenda. It is always the same party. I think that the party's chances of survival are small."

Both Kusý and Mesežnikov said that after the party congress in Nitra, Veteška will have to leave the party.

"It has always been like this," said Kusý. "Either they left by themselves, or they were forced out. Mečiar cannot bear competitors. He needs neither advisors nor strong men. He only needs servants. He has always acted on this principle, even when it could harm the party. As soon as someone started asserting themselves and started getting some attention, Mečiar cracked down on them."

Veteška's chances also seem feeble because out of the HZDS' eight regional congresses, only the Trnava congress, lead by Tibor Mikuš, has supported his candidacy. Mečiar came out with a statement that Veteška simply bought the votes of the Trnava congress' delegates.

"If there are any suspicions, it has to be investigated," said Mečiar. "It is difficult to prove it, but the number of people involved is growing. I am not saying that Veteška has organized this himself, rather it is the people working for him who could have done it. I have received indications of this, personally and in writing, from half of the constituencies."

Veteška denied buying votes, saying he would never stoop to such a thing. He also denied that his actions are harming the party.

"It is not true that I'm harming the party today by running for chairman," he said. "It would harm the HZDS if I struck back below-the-belt. I deny having bought votes. I do not want this to degenerate into backstabbing."

Mikuš supported Veteška in this respect and denied the accusations as well.

"It is all nonsense," he told the Plus Jeden Deň daily on June 4.

Despite the accusations, Veteška still believes he could win.

Veteška said he does not intend to leave the party if he loses.

"I cannot leave the HZDS," he said. "I will stay, even as a regular member. I will not consider leaving the post of deputy speaker of the Slovak parliament either."

However, he is ready to support a secret vote in the congress, as he thinks a public vote might skew the outcome.

Unlike the political scientists, Urbáni does not think Veteška would have to leave the HZDS if he loses the election.

"I do not think that anyone would want to exclude Veteška from the party," Urbáni said. "The commission is occupied with the suspicions, but its role is not to eliminate people. But there are some suspicions concerning manipulation. For example, the people around Veteška are allegedly already promising their loyal supporters ministerial chairs and public positions," he told the Pravda daily on June 4.

The History of the HZDS

The HZDS grew out of the Verejnosť Proti Násiliu (VPN) civic movement, which headed the Velvet Revolution in Slovakia on November 17, 1989. After the first democratic elections in June 1990, a government was formed in Slovakia, led by Vladimír Mečiar, who was the VPN's nominee. The cabinet ruled for almost 10 months - from June 27, 1990, until April 23, 1991. Mečiar was recalled from the post of prime minister in March 1991, during a meeting of parliament.

The HZDS itself formed part of the government twice before the current coalition. A coalition under Mečiar ruled from June 24, 1992 until March 14, 1994, and the HZDS was part of the ruling coalition for a second time from December 13, 1994, until October 29, 1998.

In the 1998 parliamentary elections, the HZDS received 27 percent of the votes but failed to form a government and remained in the opposition.

The HZDS won again in the September 2002 parliamentary elections, but as in the previous term, it did not succeed in forming a government coalition.

In the 2006 general elections, only 8.79 percent of the voting public supported the HZDS, which meant that it received 15 parliamentary mandates. The HZDS accepted the offer of the election's winner - the Smer party, and together with the Slovak National Party formed a coalition government.

Deserters from the movement

There are many cases of top representatives leaving the HZDS. In 1993, after an argument at the Trnava congress, Milan Kňažko, then the vice-chairman, left Mečiar, along with a group of other people. Kňažko wanted Mečiar to get rid of Ivan Lexa and his own secretary, Anna Nagyová, who was referred to as the "Iron Lady" because of her influence on Mečiar.

"I can't do it, she could destroy me within 24 hours," Mečiar was quoted as saying at the time.

Two years later, Lexa became head of the Slovak Intelligence Service with Mečiar's help. Three years after, as a main suspect in the case of the kidnapping of the president's son, Michal Kováč Jr., Lexa was granted amnesty by Mečiar. Shortly after leaving the HZDS, Kňažko said that "in the HZDS, mafia ways prevail."

In 2002, Mečiar got involved in a conflict with other top party members - Vojtech Tkáč, Oľga Keltošová and the current President Ivan Gašparovič.

"In the HZDS, there are non-democratic conditions," Tkáč said at the time. "It is a one-man party. It looks more like a sect, where everyone reverently obeys their spiritual leader, than a political party."

Tkáč was reacting to Mečiar's decision to leave him and other top HZDS representatives off the election list for the September 2002 elections.