PRIOR to returning to Slovakia last September to begin our hiking adventures, my husband and I absorbed material about the country's mountains and gorges that nourished our imagination. 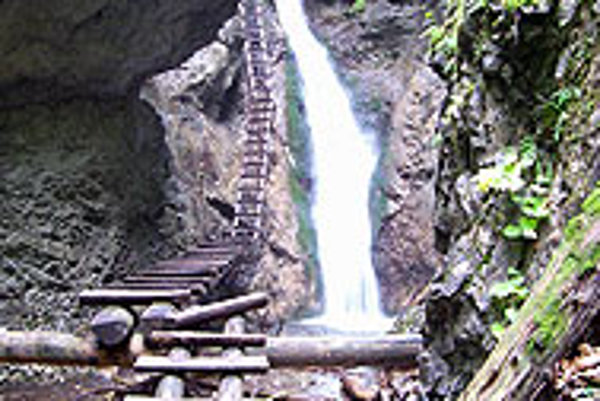 Font size:A-|A+0
PRIOR to returning to Slovakia last September to begin our hiking adventures, my husband and I absorbed material about the country's mountains and gorges that nourished our imagination.

Our two trips consisted of twenty-five days exploring Slovakia's national parks. The first stop was the Košice bus station. We arrived well-equipped with detailed hiking maps, and feeling confident, until we caught sight of the timetable. It was so complex! So many symbols, as well as phrases like "premáva len v dňoch školského vyučovania" (this bus line runs only on school days), seemed a peculiar way to write a schedule. A little anxious, we carefully looked up every new word in our mini-dictionary.

These are some impressions of the sites we explored:

Zádielska tiesňava (canyon): Slovenský Kras (karst) national park in eastern Slovakia contains a 3km-long and 300m-deep valley. Only 10m wide in places, it attracts many nature lovers each year. Cukrová Homoľa, a towering rock, drew us along a road with arching trees that provided tranquil shade. Continuing on, we passed Turniansky Castle, which sits on a cone-shaped hill, before catching the last train to Košice. We also cherished our day in Jasov, and the Jasovská cave, where a young woman with an English tape escorted us, the only tourists, to the different chambers.

Slovenský raj (Slovak Paradise): From our hotel in the village of Čingov, we rambled along the ravine of the Hornád River, and up gorges accompanied by waterfalls. Sokolia valley, Suchá Belá, and Biely brook are only a few of the countless charms of this 140 square km park. We stayed in the village of Dobšiná and rode a red and white single carriage train along its looped track. We strolled in Stratená, Dedinky, and Telgárt before and after hikes.

We also briefly explored the town of Levoča, and the pilgrimage destination of the Bazilika Panny Márie, which stimulated our cultural curiosity. We continued to Spišská Kapitula, a 16th century ecclesiastical settlement, on our way to Spiš Castle.

In the Low Tatras National Park, the 2000m summits proudly displayed their cliffs, which soared above Jasná at the top of the Demänovská valley. Breathtaking panoramas from the Chopok and Ďumbier peaks, the graceful Demänovské Saddle, the flowers at Pusté, the 900m elevation change, and the ascents to Krakova Hoľa and Mt. Siná filled our days with splendour.

A kind Slovak couple named Milan and Jana gave us a tour of Orava Castle and the outdoor museum at Zuberec, as well as a chance to discuss the current changes in Slovakia around the dinner table, filled with typical Slovak cuisine.

The town of Kremnica, which is best known for its gold mining, revealed its greatest musical asset: an organ with 3,500 Spanish pipes in St. Catherine's Church that attracts international organists during its annual organ festival.

In Banská Bystrica, we visited the grounds of the Slovak National Uprising Museum, where the colossal sculpture decked with flowers prompted a reflection on the suffering of war. This contrasted with the festivities taking place in the city the next day. With that in mind, we bused to the Veľká Fatra, and hiked over the rounded summits, admiring open views for hours. We stayed at Chata pod Borišovom with chattering Slovak hikers who enjoyed more beer than food.

In Žilina, the 100-metre main square was quiet on a Sunday. A poster caught our attention, and we ended up attending a concert of Slovak melodies sung a cappella by deep male voices, and a silent film accompanied by live music. It was the first feature film produced in Slovakia in 1921: Jánošík. We learned more about it by conversing with the organiser. A privilege indeed!

This set the scene our next destination, Terchová, the birthplace of Jánošík. Families in Štefanová opened their doors to hikers. Veľký and Malý Rozsutec helped satisfy our love for climbing. From Krasňany, we ascended the Malá Fatra mountain ridge, continuing over Malý Kriváň, Veľký Kriváň, Chleb, Stoh and Mt. Sokolie.

Our last stop was Štúrovo, where hundreds were crossing the Mária Valéria Bridge on foot. Completed in 2001, the bridge links the Hungarian town of Esztergom with Štúrovo, and symbolizes the restored relations between the countries. In the town's pedestrian area, musicians and folk dancers of all ages were showing off their best elaborately embroidered garments.

In Canada, we keep looking for opportunities to learn more about Slovakia, and share our passion with the community through presentations. We are planning to travel to some of the lesser known areas of the country in the near future, in search of additional great rewards.

This is the second in a three-part series on the author's experiences as a tourist exploring Slovakia. Check back in the coming weeks.