EU campaigns for tolerance and diversity

MORE than half of EU citizens would not know how to defend their rights if they fell victim to discrimination or harassment, says a 2006 Eurobarometer survey on discrimination.
The survey shows that a higher level of awareness of these issues is needed. In Slovakia, only 50 percent of those surveyed believed that more efforts were needed to fight discrimination. 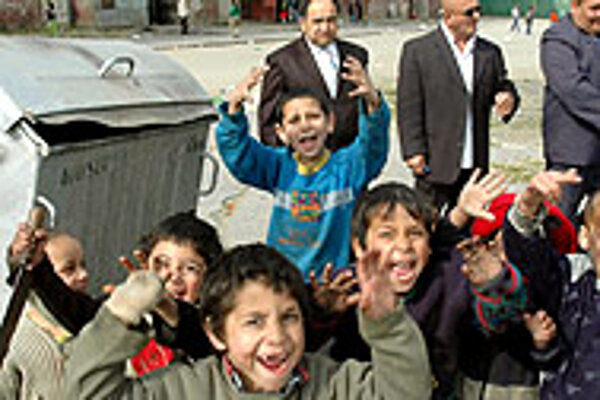 Font size:A-|A+0
MORE than half of EU citizens would not know how to defend their rights if they fell victim to discrimination or harassment, says a 2006 Eurobarometer survey on discrimination.

The survey shows that a higher level of awareness of these issues is needed. In Slovakia, only 50 percent of those surveyed believed that more efforts were needed to fight discrimination.

People experience discrimi-nation on a daily basis all over the EU, even in countries that are generally considered to be quite tolerant, such as Denmark or the Netherlands. Because of this, the EU has announced that it wants to make some decisive progress in 2007 in the areas of diversity and tolerance.

The European Commission said the year of 2007 should be devoted to a public discussion of diversity's benefits for European society, and to raising awareness of people's rights to equal treatment and protection from discrimination.

"The overarching aim of the Year is to promote the benefits of diversity for both our economy and our society," said Vladimír Špidla, European Commissioner for employment, social affairs and equal opportunities, in his introduction to the European Year of Equal Opportunities for All.

"In Slovakia, people's awareness of ways they can protect themselves against discrimination is very low," Vrbovský told The Slovak Spectator.

The Anti-Discrimination Act, passed in 2004, spells out provisions on equality and non-discrimination that are also embedded in the country's constitution and the international treaties that Slovakia is a part of. The Act aims to protect people from all forms of discrimination and to ensure that victims of discrimination will have recourse to adequate and effective protection in the courts, said Jana Trojanová from the Human Rights and Minorities section.

The Year of Equal Opportunities will include activities at both European and national levels. The European Commission has a massive "public engagement" campaign planned, along with conferences, surveys and studies pertaining to diversity issues. Each member state will define its own national strategy and identify sore spots that need to be discussed and dealt with.

So far, €7.65 million has been earmarked for diversity-related projects and activities in EU countries, says the European Commission's website. Each participating country (EU 27, Iceland, Liechtenstein and Norway) will co-finance the projects, covering 50 percent of the costs using both private and public finances. This should generate a minimum of €15 million for projects at the national level.

In Slovakia, the Human Rights and Minorities Department of the Cabinet Office will implement eight projects and a large media campaign along with informal meetings, discussions, round tables and cultural events, said Vrbovský.

Testing, a project organised by the NGO People Against Racism (Ľudia Proti Rasizmu), aims to find out whether public and private institutions respect anti-discrimination legislation and fulfil their related duties.

Gender equality is another urgent issue, says the Slovak Society of Family Planning and Parenthood Education, which needs to be implemented more effectively. The society has developed a project entitled Consulting Centre for Gender Equality, which will provide information and legal consultation.

All the participating projects and their results will be presented in a final wrap-up campaign at the end of the year, said Vrbovský.

"The Year is, by definition, only made up of 12 months, but the idea of such a wide initiative is to put diversity - a fact of life in Europe - on all participating countries' agenda today as well as after 2007," said Špidla.