SLOVAKIA has had serious problems drawing money from European Union structural funds and the country might end up without any finances from the fund this year, MP Štefan Kužma of the opposition Slovak Democratic and Christian Union has warned. 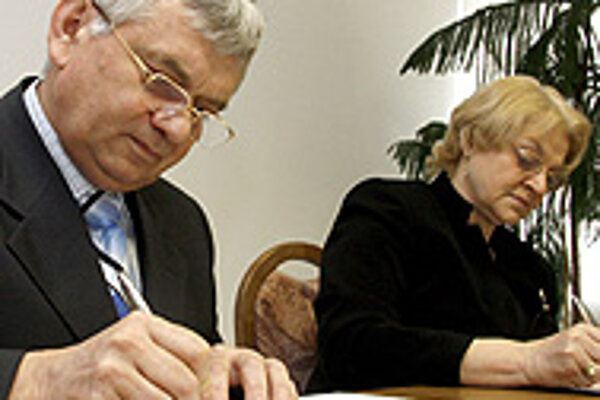 Font size:A-|A+
SLOVAKIA has had serious problems drawing money from European Union structural funds and the country might end up without any finances from the fund this year, MP Štefan Kužma of the opposition Slovak Democratic and Christian Union has warned.

The Labour, Social Affairs and Family Ministry in particular has failed to take advantage of the EU funds allocated for the 2004 - 2006 funding period, Kužma said, adding that there is still Sk300 million (€8.8 million) left to be drawn by the end of the year.

Kužma said that the 15 experts who had been working with the funds until 2006, and who were recently fired, managed to draw 100 percent of the funds available while the 33 people who have been hired to replace them are unable to handle the process effectively.

"[These statements] are biased and the conclusion is based on vague information," said Labour Ministry spokesperson Alexandra Gogová in response to Kužma's claims.

Gogová told The Slovak Spectator that some of the employees left on their own will, mainly due to the opening of other EU-related positions at other governmental institutions. She said that there is no direct link between the exodus of the original employees and the hiring of the new ones.

"The move came on heels of the government's decision in April 2007 to strengthen the teams that work with EU funds in all relevant governmental departments," Gogová said. By hiring new people, the government wanted to make sure that the drawing of EU for two parallel funding periods would be successful.

The Labour Ministry needs 99 more people working with EU funds if it does not want to lose money, said Viera Tomanová, the Labour, Social Affairs and Family Minister, on the public television channel STV. She blamed the previous government for making bad decisions on the criteria and mechanisms.

"It cannot be the fault of the previous government, since there were no problems in 2006, when the ministry was working under the same criteria and mechanisms as this year," Kužma told The Slovak Spectator.

According to Gogová, EU audits have revealed shortcomings in the control and management mechanisms used by the previous government, and thus the ministry has had to modify the system of drawing and implementing the funds. At the same time, the government had to get ready for the start of the 2007-2013 funding period, she added.

However, Kužma argued that even though the Robert Fico government keeps talking about wanting to create a socially just state, it does not know how to use the tools available to it that would help improve the social conditions in Slovakia.

The core of the problem, according to Kužma, is that negotiations between the EU and the Slovak government about the long-expected National Strategic Reference Frame 2007-2013 are underway. The Frame is a document that is needed by public and private institutions that want to apply for EU funding. The draft Frame was prepared in May 2006 by the Mikuláš Dzurinda government, of which Kužma was a member. Now the adoption of the document has been delayed because the current government wanted to insert changes into the draft and kept it open until October 2006, Kužma said.

Slovakia allocated Sk63.5 billion (€1.85 billion) for projects from the structural funds and the state budget during the 2004-2006 funding period, reads an IT Monitoring System for Structural Funds and Cohesion Fund report from May 23, 2007. It's proposed 13,630 projects, together applying for a total of Sk211 billion (€6.15 billion). According to the report, 4,638 projects are currently under implementation, with Sk25.8 billion (€752 million) already having been drawn and utilized.

Funding applicants such as municipalities and private companies usually complain about the funding process' red tape. They expect the National Strategic Reference Frame will simplify the whole process and make it easier for Slovak applicants to make full use the European funds available to them.