Fine dancing, and a view of country life

FAMED FOLK dance troupe Lúčnica performed their Slovenský Triptych at Istropolis on June 2 to a sold-out crowd.
The show featured three panels - Na Holiach (On the Hill), Gazdovia (Farmers), and Majstri Remeselníci (Master Craftsmen) - that varied in topic from work with livestock to a celebration of the harvest to a portrait of craftsmen at play (which was apparently any time the boss had his back turned). 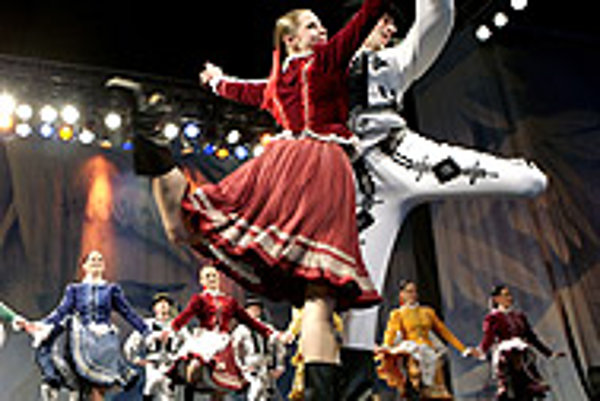 The show featured three panels - Na Holiach (On the Hill), Gazdovia (Farmers), and Majstri Remeselníci (Master Craftsmen) - that varied in topic from work with livestock to a celebration of the harvest to a portrait of craftsmen at play (which was apparently any time the boss had his back turned).

Much of it contained the lighthearted takes on Slovak pastoral life I've come to expect from Lúčnica.

It began with the crack of a bullwhip that morphed parading cows into women clad in white, who jumped rope with it. That was followed by men who trotted in as sheep, and were playfully sheared.

As well as an exhibition of dance that combined liveliness with the grace of the human form and movement, the scene was a mischievous interaction between the sexes. The idea of a woman morphing into a cow recalls the Slovak word krava, which means "cow", and, like English, can be used as an insult. Additionally, during the dance, in which Štefan Nosáľ, Lúčnica's octogenarian director and choreographer, invited us to gaze at the inner workings of a mill, women morphed into bags of flour that were picked up or left lying around. The dancers never let on they were hoisting something as heavy as bodies onto their backs, and the ladies representing the bags of flour moved as naturally as the men carrying them. It was an enjoyable shtick to watch, and a take on gender relations that I had not yet been exposed to.

Slovak folk songs sung on stage were most often used to begin or end a dance selection. In the orchestra pit sat the Zlaté Husle (Golden Violin) orchestra, led by Martin Sleziak. While the ensemble contains a number of instruments, the sound of strings, dulcimer, and flute dominated this performance.

Additional instrumentals came from onstage, such as dancers with four cow bells ringing four different notes; the traditional percussive boot stomps of dueling male dancers, to which the jingling of spurs was added; the clog-clad cobbler who took on his fellow shoemaker to see who could make two pieces of wood sound more impressive; a flighty Celtic-sounding flute; and the tambourine-heavy song of the blacksmiths. With these creative use of items and tools from traditional everyday life, Lúčnica effectively blurred the lines between orchestra and onstage performers.

The background scenery was a simple draping of three pieces of textile with colours and patterns reminiscent of a rural scene, the exact shading of which was determined by lighting.

The audience was full of energy, and intermezzos of dueling violin and dulcimer solos kept it at a heightened state of excitement.

In the end, the performance was more thought-provoking than simple entertainment. It was an expression of Slovak culture, a celebration, and an idealization of what will be lost as a result of the country's unmitigated westernization - a real-life connection with the Slovenský Triptych.

And this is where, when put against the background of reality, the triptych's lightheartedness melted away. The picture it drew was of a nation increasingly willing to trade its nature-oriented existence for long lines at Tesco.

Based on the five encores, three of which were to standing ovations, it seems the audience agreed the evening's performance represented select instrumentation, vocals, choreography, and most of all - dancing.