THE PREMIERE of Verdi's Il Trovatore at the Slovak National Theatre (SND) on the weekend of June 8 was a throwback to some of the house's uninspired past productions, in which unconvincing singers wandered about the stage aimlessly, the chorus sounded timid and lethargic, and the entire production concept came across as contrived. 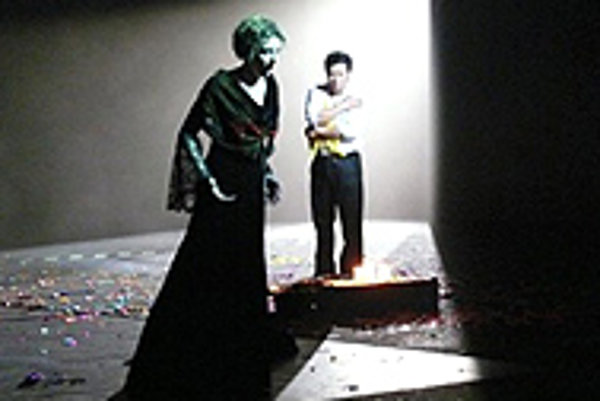 THE PREMIERE of Verdi's Il Trovatore at the Slovak National Theatre (SND) on the weekend of June 8 was a throwback to some of the house's uninspired past productions, in which unconvincing singers wandered about the stage aimlessly, the chorus sounded timid and lethargic, and the entire production concept came across as contrived.

Why such a debacle was allowed to happen, and close out an otherwise groundbreaking season with such a bitter taste, is a question the SND management should be hounded to answer. Did anyone other than the production's stage director, Martin Bendik, honestly believe it contributed to the SND's newly stated objective of becoming a major European opera house through innovative and dynamic modern productions?

If so, that person must think festooning trench coats and machine guns to characters from the 15th century is all that's necessary to make a cutting-edge modern production. Silly me. I thought you needed a concept faithful to the libretto, visuals that express the psychology of the characters, and outstanding singers who are also compelling actors.

The production's problems were evident from the very first scene, in which Ferrando, captain of a group of soldiers, tells his men about the tragedies that have marked the life of Count di Luna, whom they serve. Years ago, he says, a Gypsy woman was burned at the stake for allegedly having cast a spell on the count's younger brother that made him sick. In revenge, the woman's young daughter stole the sick child and threw him into a fire. Nonetheless, the count's father, until his dying day, believed his son might be alive, and forced the count to swear to continue searching for his brother.

Clearly, this makes for gripping drama. What could be more exciting than kidnapping, murder, witchcraft, revenge, hope and despair? Throw in a love triangle and scenes of ardent, sweeping melodies, and you have one of Verdi's finest operas.

But not when Ferrando's monologue is sung with the flair of a government hearing on proposed tax legislation, as performed by Peter Mikuláš. Without the ominous vocal shadings and brooding expressions of a campfire ghost story, this 15-minute introduction dragged on, causing the audience to lose interest and miss exposition essential to the rest of the story.

The evening's other soloists were equally disconnected from the drama. Jana Doležílková, who sang Leonora, the love interest of both the count and Manrico, an officer in a rival army, never seemed very enamoured of Manrico, though she poisons herself at the opera's conclusion rather than be with the count. This lack of presence flowed over into her technique, which was sturdy enough to handle the time-stopping high notes Verdi often gives his sopranos in trios and duets, but dramatically unconvincing.

Mario Zhang (Manrico) sang with confidence and grace, but his voice was pinched in the throat, which prevented more pleasing, broad, resonant tones from emerging. He often seemed lost on the stage, as though he were inventing his staging on the spot, without much regard for the meaning of the text.

Perhaps the greatest letdown was Denisa Hamarová, who sang Azucena, the Gypsy woman's young daughter who kidnapped the count's brother and threw him into the fire. Azucena is blessed with one of opera's most thrilling arias, in which she tells Manrico, who she has raised as a son, that she was so delirious the day her mother was burned, she accidentally threw her own child into the fire, rather than the duke's brother. Manrico realizes this means Azucena is not his mother, but she silences him with assurances her words are just the ramblings of an old, troubled woman.

Hamarová's dusky, resonant alto voice and flowing phrases served her well in roles like Ježibaba in Dvořák's Rusalka and the Composer in Strauss' Ariadne auf Naxos, but lacked what Azucena demands most: the tones of a committed actress brave and compassionate enough to delve into the psychology of a woman driven to revenge by unspeakable tragedy.

This is where Bendik could have aided his singers the most, in picking the bones of each characters' background for every juicy bit of motive that could make the drama more communicative. From Hamarová's performance, it was clear that was not the focus of rehearsals, and the entire production was worse off for it.

Compounding these flaws was an apparent miscalculation in the amount of sound needed to match the acoustics of the new SND theatre. From where I sat in the back of the orchestra level, many of the scenes were barely audible. Nonetheless, the evening's conductor, Rastislav Štúr, never raised the orchestra above a whisper or coaxed more out of the singers.

The evening's saving grace was in its set design, vividly designed by Juraj Fábry, which shone with rich colours that embraced the scenery, and added warmth and dimension to scenes that otherwise offered little to watch.

Bratislava's operagoers expect and deserve better from the SND. Luckily, it has proven in the past that it can, in fact, deliver.