THE PRIME ministers of the Czech Republic, Hungary and Slovakia spoke out against Austria's request that their countries' accession to the Schengen zone be delayed, during a prime ministerial summit of Visegrad Four (V4) countries in Bratislava. 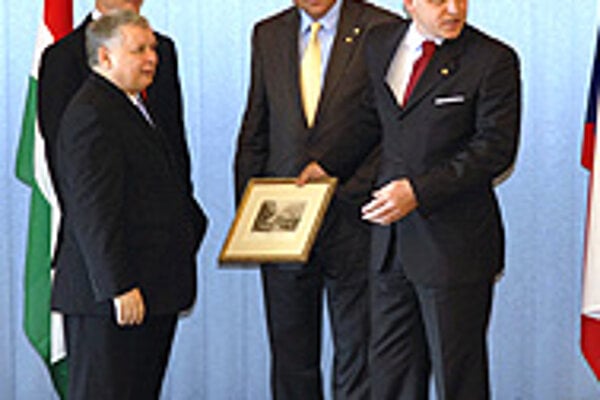 Font size:A-|A+
THE PRIME ministers of the Czech Republic, Hungary and Slovakia spoke out against Austria's request that their countries' accession to the Schengen zone be delayed, during a prime ministerial summit of Visegrad Four (V4) countries in Bratislava. PM Mirek Topolánek of the Czech Republic, PM Ferenc Gyurcsány of Hungary and PM Robert Fico of Slovakia also said that were against Austria's intention to control its borders with V4 countries for an additional four months after the group enters the Schengen zone on January 1, 2008. PM Jaroslav Kaczinski of Poland, the last member of the V4, and PM José Sócrates of Portugal also attended the June 18 meeting.

"We don't agree with this because there aren't two ways of opening the borders and there aren't two Schengens," Gyurcsány told the media at a press conference, adding that the V4 rejects these plans "politely, but decisively."

Austrian PM Günther Platter announced that Austria would open its borders with Slovakia, Hungary, the Czech Republic and Slovenia only if they are 200 percent ready, the Slovak daily Sme reported.

"Any attempts on the part of other countries to stop the plan [to enter Schengen in 2008] are unacceptable," said Fico.

Slovakia is doing its best to be well prepared for the opening of the borders, said Fico, adding that Slovakia has been monitoring the situation on its 98-kilometre-long border with Ukraine.

Though the most closely followed part of the summit was Fico's first serious meeting with his Hungarian counterpart Gyurcsány since he became Slovakia's prime minister, Austria's EU-related posturing and its attitude towards nuclear energy were discussed much more than Slovak-Hungarian relations, which took a turn for the worse last year when Fico formed a coalition with the far-right Slovak National Party.

The V4 group also took a stance against Austria on nuclear power issues, with all four countries saying they respect the importance of nuclear energy, especially when it comes to climate changes and the countries' energy independence. They agreed to hold the EU Nuclear Energy Forum, which will meet twice a year alternating between Prague and Bratislava. If the rest of the EU members find this agreement acceptable, the first meeting of the forum could take place in Bratislava this autumn.

Austria has traditionally been cautious when it comes to the use of nuclear power and was a strong advocate of Slovakia closing down two of the blocks at Slovakia's nuclear power plant in Jaslovské Bohunice.

The V4 leaders also examined ways of making Eastern European post-communist countries more relevant in the evolving European zone. Sócrates' attendance at the summit was one of the signs that the V4 countries are trying to increase cooperation with other EU members.

"After the V4 joined the EU, it's been necessary to redefine priorities and of course it's hard to find a priority that's as important as European integration was," Tomáš Strážay, the Slovak Foreign Policy Institute's specialist for the V4, told The Slovak Spectator. The Visegrad Group has three dominant areas of cooperation, said Strážay: Schengen accession, Eastern-neighbour policies and the Visegrad Fund.

The V4 Prime Ministers said they want to start inviting European guests to their summits on a regular basis. However, said Fico, since "the V4 has a high political added value, there's no reason to enlarge it".

On February 15, 1991 the presidents of Czechoslovakia (Václav Havel), Hungary (József Antall) and Poland (Lech Wałęsa) established the V3, which was re-named the Visegrad Four after Czechoslovakia split. After the fall of communism in 1989 the Central European post-communist nations felt a need to increase cooperation in order to heal their economies, which had been ruined by socialism, and speed up the process of European integration.

The Visegrad Fund, the group's only institution, is the V4's most visible project and is based in Bratislava. The Fund sees its budget swell every year, with the money being put toward cultural and educational projects. For example, under the Visegrad Fund's scholarship program, 87 students from Ukraine, Belarus and Moldova were awarded grants to study in V4 countries during the 2006 - 2007 academic year.

However, it's not only culture and education that benefit from V4 cooperation, but other sectors as well, said Strážay. The meetings take place on different administrative levels, from the heads of states and prime ministers to the representatives of regional administrations. Strážay said the V4's strength is in the decisions and political stances they are able to take together on issues related to V4 as well as the whole EU. The V4 countries could play an important role in deciding about the next EU enlargement in Eastern Europe and the West Balkans, he added.

"It would be wrong to say that the V4 has been losing its importance since the countries entered the EU," Strážay told The Slovak Spectator.

The fact that Sócrates, the prime minister of the country that is going to preside over the EU, came to the V4 summit shows that the group enjoys international significance, Strážay said.

Sócrates said he hoped that the Bratislava summit would be the last time the V4 had to deal with the European Treaty, which should fill in for the EU constitution that failed to be ratified. Poland is insisting on changing the voting system used for EU decision making while the Czech Republic, Hungary and Slovakia hope to wrap up the discussion on the European Treaty for good.

The Czech Republic is willing to support Poland's changes said Topolánek, but they are "not going to die supporting it". Topolánek added that they are willing to compromise and, depending on the situation, could support the Dutch or German drafts as well.

The Slovak government is ready to support the draft submitted by the German presidency at the European Council meeting, said Fico. Both the Slovak and Hungarian prime ministers made it clear that Europe needs to quit dealing with issues that prevent them from solving more important social and economic affairs.

"I believe we will be able to announce an agreement on a mandate for the international conference that should take place in the second half of this year [during the Portuguese presidency]," Fico said.

"We have been discussing [the document] for two years now, but the citizens and the world are waiting for a compromise," Sócrates said regarding the disagreement between Poland and the rest of the V4 countries over their approach to the European Treaty.

"It's necessary that the votes of all citizens are equal and that the countries are equal too, especially in the key situations," Kaczinski said, adding that member states do not have the same status within the European Union, and that Poland is ready to present this opinion at the European Council meeting.

"Our citizens see us as a group of arguing teenagers," Gyurcsány said. People do not understand these issues and therefore leaders should quit the discussion and start dealing with the real reasons of the EU existence - social and economic affairs, he said.

"A decision can only be reached through compromise," said Sócrates, adding that if the EU fails to reach an agreement, it will harm Europe in all areas, including international relations.

A compromise over the European Treaty will be one of the main focuses of Portugal's presidency, which starts in the second half of 2007. Portugal will also focus on the internal market, increasing the employment rate, climate change, nuclear power and transatlantic relations.

Despite the contention on certain issues, it was felt that progress is being made with the V4's integration into the EU.

"There is a favourable trend now to treat the V4 countries the same as the older EU member states," Fico said.