Unions want their "law of the year"

"THE LAW of the year" is how Prime Minister Robert Fico referred to it when advocating the latest revision to the Labour Code, which is to replace what Fico has called a "neo-liberal code that needs to be returned to the form it had before the large amendments" made by the Mikuláš Dzurinda government. 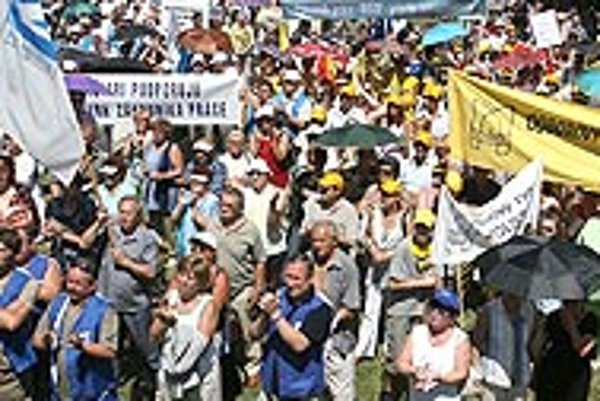 Font size:A-|A+
"THE LAW of the year" is how Prime Minister Robert Fico referred to it when advocating the latest revision to the Labour Code, which is to replace what Fico has called a "neo-liberal code that needs to be returned to the form it had before the large amendments" made by the Mikuláš Dzurinda government.

Employers and business associations do not share the prime minister's enthusiasm for the draft legislation, which, among other things, grants extra powers to trade unions, establishes severance payments for employees who lose their jobs due to restructuring and makes conditions for self-employment stricter. Part of the pre-election deal that Fico concluded with the Confederation of Trade Unions, in return for an election endorsement, was a massive revision to the labour legislation. A couple hundred unionists rallied on June 19 in front of parliament for having passed the revision in the form the cabinet approved it. Labour Minister Viera Tomanová told the rallying unionists that the draft should not suffer any changes, based on the ruling coalition's talks.

"Of the 154 revisions to the Labour Code, 71 are to harmonise the legislation with related European Union regulations and International Labor Organization agreements, respectively the European Social Charter," Miroslav Gazdík, President of the Confederation of Trade Unions (KOZ) told The Slovak Spectator. "We want to create legal conditions for dignified and good work."

Regarding the extra powers that the draft promises to unions, Gazdík said that the unions do not really want anything more than what the international agreements already grant them for the "protection of the rights of employees."

"We are not satisfied with the current course of negotiations because many MPs, mostly from the opposition, are not familiar with these international norms," Gazdík said.

Trade unions have quite a strong position abroad, but they are strong thanks to the employees and not the legislation, Robert Kičina, of the Business Alliance of Slovakia (PAS), told The Slovak Spectator.

"In Slovakia we are going to strengthen the position of unions through the law, which is not correct," Kičina said. "Besides, they are going to gain powers that are not quite standard abroad. The PAS has done an international comparative survey and found out that, for example, some of the powers the unions aspire to gain are not internationally standard."

Tibor Gregor, head of Klub 500, which shelters businesses with 500 or more employees, said that the club understands the government's pressures on businesses to pay more attention to the quality of labour and environment. However he is more sceptical of the union's claim that they need powers to "increase the protection of the health and life of employees," as the KOZ website claims.

"For employees the authority of the unions to intervene into the powers of the companies' management without any responsibility does not make much sense," Gregor told The Slovak Spectator. "We see this as an abuse of the government's efforts by some trade union officials. They really should know that the law makes each company responsible for the safety and the protection of their employees' health."

The trade union members are not the ones who increase production and create new jobs and they do not have to seek markets for the businesses' products, said Gregor adding that he sees no logical reason to increase their powers.

Slovak employers sheltered by the National Association of Employers (RÚZ) and the Association of Employers of Slovakia (AZZZ) dislike the prospect of having bulkier unions and keep objecting to the changes to the structure of work hours, norms of work consumption and severance pay for employees during the two-month notice period before their work contract is terminated.

"The Labour Code as a whole has already had a negative impact on the business environment in Slovakia," Kičina of PAS said. He assumes that the Labour Code will also have an impact on foreign investors.

"Some of them have already suggested that they would have probably reconsidered placing their investments in Slovakia if they had known about the plans to change the Labour Code," Kičina said.

However, the revised labour legislation will still be far more advantageous than labour laws in the home countries of some of the foreign investors, said Gregor of Klub 500.

The Labour Ministry knows the opinion of the investors who have came to do business in Slovakia as it has been discussing the code with the business community and with the foreign chambers of commerce and industry that operate in Slovakia, Alexandra Gogová, spokeswoman of the Labour Ministry, told The Slovak Spectator.

"The draft matches the legal culture of the European labour market while the attractiveness of investing in Slovakia depends on a number of other conditions," Gogová said.

The American Chamber of Commerce in Slovakia (AmCham) said on June 19 that it still had concerns about provisions related to the powers of trade union representatives, the severance payment and notice period, overtime, fixed-term contracts, other employment activities and emergency work, the newswire SITA reported.

AmCham is conflicted over the new provision that allows a third person to enter the employer's premises, as this could lead to injuries, significant potential for product and material damage, the possible misuse of business sensitive know-how, and other negative consequences. Jake Slegers, AmCham's executive director, said the businesses his organization represents understand the government's efforts to make the legislation more "employee-friendly" and they are grateful for the compromises achieved during the talks with employers so far. However, AmCham said that the latest version of the Labour Code amendment still contains provisions that could have an overall negative impact on Slovakia's competitiveness, lessen the creation of new employment opportunities for Slovak citizens and limit current employees' right to choose.

While the Dzurinda government's labour code aspired to make the hiring and firing process simpler so that the companies would be motivated to hire people, the latest version drafted by the Fico government wants to make the process more complicated and provide more protection for the employee. The business sector claims that it will discourage employers from hiring new people.

President of the Confederation of Trade Unions Gazdík rejects the fears that the labour legislation would increase operating costs and possibly result in fewer jobs. He argues that the "often mentioned increase of costs that businesses fear will not appear after the adoption of the Labour Code".

"These expenses exists even now, it is only that regular employees, the people who work, bear this burden while the owners of companies and top managers find joy in the increasing profits," Gazdík told The Slovak Spectator.

Jozef Uhrík, head of the Car Industry Association, said there is a hope the Labour Code will find a form that would suit both the employers and the trade unions. Uhrík said that the draft still contains provisions that could have a negative impact on production in factories, SITA reported. In April, Alain Baldeyrou, head of French carmaker PSA Peugeot Citroen Slovakia in Trnava, sharply criticized the changes to the Labour Code, objecting to limitations to the night shifts, which finally have been dropped from the bill.

According to a recent Polis poll published on June 20, 41 percent of the respondents said that the unions insufficiently protect the interests of the employees. The 1,027-respondent poll conducted for PAS also showed that 64 percent of those polled said the unions were politicized.

"If the results of the poll are objective, then it is not a very flattering result and we face a lot of work," said Gazdík.