THE US' visa regime has been one of the most discussed issues in Slovak-American relations over the last few years. US President George W. Bush promised during his visit to Bratislava in 2005 to work with the Slovak government to reform the US visa policy. 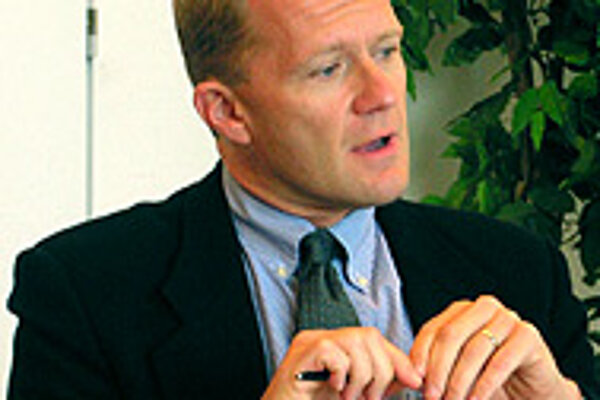 Font size:A-|A+
THE US' visa regime has been one of the most discussed issues in Slovak-American relations over the last few years. US President George W. Bush promised during his visit to Bratislava in 2005 to work with the Slovak government to reform the US visa policy. Has any progress been made since then towards including Slovakia in the Visa Waiver Program (VWP) so that Slovaks can enjoy visa-free travel?

The Slovak Spectator spoke about the current visa situation with Jan Surotchak, chairman of Friends of Slovakia's board of directors.

Friends of Slovakia (FOS) is a non-profit organisation founded in 2001 to improve relations and increase cooperation between Slovakia and the US.

The Slovak Spectator (TSS): Friends of Slovakia is involved in trying to help get Slovakia included in the VWP. What is Slovakia's current status in this regard?

Jan Surotchak (JS):Slovakia, like its neighbours which are new members of both the European Union and the North American Treaty Organization, is seeking to be included in the Visa Waiver Program that covers 27 other predominately European countries. Both the United States Congress and the Administration of President George W. Bush have been discussing enhancement and expansion of the Visa Waiver Program that would improve US security, improve relations with new members and have a positive economic impact.

TSS: What still needs to be done before Slovaks can be granted visa-free travel?

JS: First of all, the Congress needs to agree on new VWP legislation, and a number of organizations like FOS are providing information for this process. This new legislation is likely to focus on enhancement and application of uniform, security-enhancing standards to all countries worldwide who seek inclusion in the program. These standards include better reporting on lost passports, better data on travellers, including criminal background, the development of an electronic travel authorization form for those not requiring visas, securing agreement from countries to take back "overstay" cases - a problem with certain countries (although not the Visegrad group), increased airport security and the use of air marshals, and improved document standards. Some versions of the new legislation also set new targets for percentages of non-immigrant visa refusal rates. In this regard, Slovakia is already in a much better position than, say, Poland.

TSS: How long do you think it will be before Slovakia is included in the program?

JS: If legislation could be passed by both houses of Congress in a timely fashion, many in the US government consider it feasible for qualified new members to enter the program before the end of the current presidential term of office. This, of course, depends on when legislation will come from Congress.

TSS: What concrete steps is FOS taking to support Slovakia's inclusion in the VWP?

JS: Friends of Slovakia, in conjunction with American Friends of the Czech Republic and the Center for Strategic and International Studies (CSIS), sponsored a successful Forum for Congressional staff March 5 on "The Impact of the New Visa Waiver Legislation on Central Europe". The panel included Paul Rosenzweig, Acting Assistant Secretary for International Affairs, Department of Homeland Security, Mark Pekala, Deputy Assistant Secretary in the Bureau of European and Eurasian Affairs, Department of State and Michael Wyganowski, Executive Director, Center for European Policy Analysis. Janusz Bugajski, Director of the CSIS New European Democracies Project moderated the panel. The panellists discussed the status of proposed modernization and enlargement of the Visa Waiver Program that has been debated in Congress. They also commented on the impact of expanding the VWP with particular reference to the inclusion of US allies in Central Europe and pointed out the negative foreign policy implications of failure to do so.

TSS: Can you give me some examples of other FOS activities that support Slovak-American relations?

JS:The FOS mission is to strengthen friendship and mutually beneficial cooperation between the United States and Slovakia, as nations sharing similar values of freedom, democracy and a market economy. We seek to promote this cooperation in economic, business, political, security, cultural, educational and humanitarian fields and to improve mutual understanding between our two peoples. In the field of politics and diplomacy, FOS seeks to promote a greater understanding of Slovakia and its domestic, foreign and security policies by America's decision-makers. Primary areas of activity include building networks and increasing Slovakia's visibility in the United States through a series of Roundtables on major topics of interest. In the field of business and economics, FOS works with Slovak and American companies and entrepreneurs to explore and advance bilateral economic ties of trade and investment. In the field of culture and education, FOS is committed to enabling Slovaks and Americans to share with each other the rich and diverse artistic and cultural heritage of both countries. In this area, Friends of Slovakia brings young Slovak leaders to the United States through a summer Slovak Scholars program and promotes a variety of cultural exchanges.