THE INTERRUPTED tradition of the biggest folk music and dance festival in Slovakia will resume in the northern Slovak village of Východná on June 29. On this day, the gates of the new premises will open to welcome more than a thousand performers and thousans of visitors. 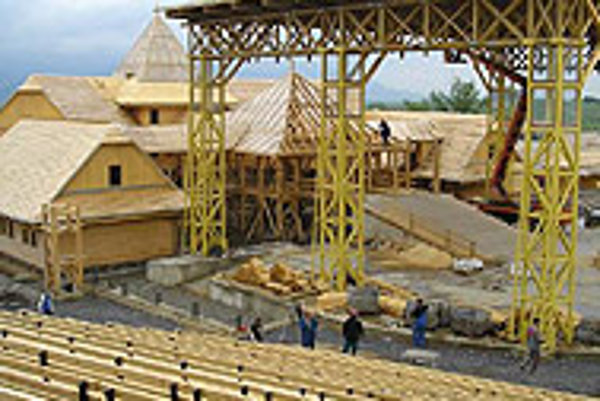 Font size:A-|A+0
THE INTERRUPTED tradition of the biggest folk music and dance festival in Slovakia will resume in the northern Slovak village of Východná on June 29. On this day, the gates of the new premises will open to welcome more than a thousand performers and thousans of visitors.

"For me the renewal of the festival after a one-year break was a priority," Culture Minister Marek Maďarič told The Slovak Spectator.

"I think it could have been organized last year, but there was not enough will at the ministry," he said, referring to the tenure of his predecessor, Rudolf Chmel.

Last year, the expected 52nd annual festival did not take place because the long winter and a shortage of money had prevented the village from completing a new amphitheatre. The village preferred to cancel the festival rather than hold it under provisional conditions.

PM Robert Fico took the festival under his auspices and contributed to the Sk4 million festival budget with Sk1 million from reserves of his office.

From Friday June 29 to Sunday July 1, about 1,300 performers mostly from amateur folk music and dance ensembles will demonstrate the hugely diverse folklore traditions of Slovakia. In addition, about 180 performers will represent the folk traditions of Turkey, Hungary, Cameroon, the Czech Republic, and Romania.

Organizers have prepared 35 shows and the rich accompanying programme for which Východná is known. The latter include handicraft and dance workshops as well as dance parties for the visitors.

The Lúčnica for Východná show on Friday will be one of highlights of the festival, presenting an attractive programme by the prominent folk ensemble Lúčnica. The first day of the festival will culminate at 23:45 when the fireworks coordinated to Shepherd's Talk by composer Svetozár Stračina, will take place. The night programme will continue with dance workshops and folk music performances across the festival premises.

On Friday, the Fujara and Slovácko verbuňk shows will pay tribute to the fujara, a Slovak folk instrument, and the dance called the verbuňk. Both the instrument and this unique dance were included on the list of "oral and intangible human heritage" put together by the United Nations Educational, Scientific and Cultural Organization (UNESCO).

Organizers promise a fun time at the Live Museum of Traditional Housework on Saturday, at which folk handicraftsmen from Hrušov and Kozárovce will show some handicrafts which have already disappeared from Slovak households. "Visitors will also have a chance to, for example, make wooden prongs for rakes, husk beans from pods, or make wood chips, which we nowadays buy in stores," said Hamar.

The Treasury of Slovakia will introduce the "best of" Slovak folklore, compiled from the repertoire of village folk ensembles, dancers, singers and musicians. The young generation will perform in the Husľovačka show, presenting a more modern approach to folk music and dance. This will be followed by Dances from Šariš to be performed by folk ensembles from Košice.

The ethno and world Good Music show will feature the ethno-jazz ensemble Bašavel, the jazz trio Akora and their guests, inspired by Slovak traditional music.

Exhibitions will present the art of tinkering and the Slovak tradition of shepherding. During the festival, five folk wood carvers will create impressive sculptures, which will remain to decorate the festival premises.

Construction of the new premises cost over Sk99 million, of which 70 percent was covered from structural funds. The rest came from the village and the state budget.

The new amphitheatre seats up to 8,000 spectators, 1,000 more than the previous one. As many as 1,000 spectators can watch programmes at the small stage. "The congress centre and the observation tower have yet to be completed," said Jana Kresáková from the Culture Ministry.

The Culture Ministry cares about folklore

The Culture Ministry has declared its devotion to folklore. To create a certain hierarchy among festivals, enabling a better distribution of financial support, the ministry wants to audit folk dance and music festivals after the festival season. So far, a number of festivals have been held across of Slovakia, many of which were organized spontaneously by local folk enthusiasts.

"I want to bring together specialists in folklore to decide a hierarchy of festivals. Those festivals which we consider to be festivals of national or regional character will be able to count on the greatest support from the state," said Maďarič. "This hierarchy should ensure that every festival has appropriate financing from the position of the state."

The Culture Ministry wants to prevent a recurrence of last year, when the Východná festival did not take place for the first time in its 52-year history.

"I attribute great importance to folk dance and music festivals within the framework of preservation of traditional culture in Slovakia," said the minister.

For more information, visit www.obec-vychodna.sk (only in Slovak).
During the festival, express trains will stop in Východná.