Summer of Culture opens with songs of activism and empowerment

RIGHT AROUND this time last year, the doors of the Summer of Culture Festival in Bratislava were blown open with a massive Sting concert that rocked the Artmedia Petržalka Football Stadium.
This year's opening act is just as exciting, albeit slighty more low-key. 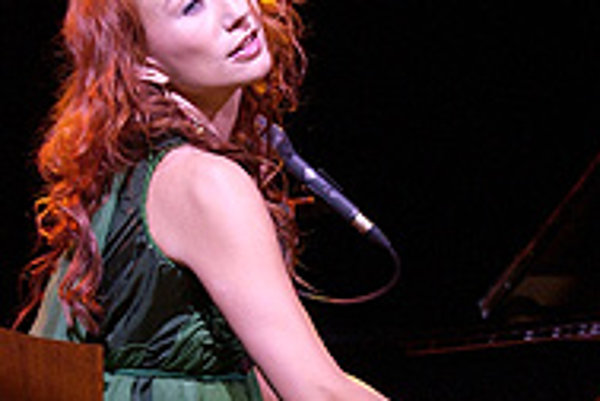 Font size:A-|A+
RIGHT AROUND this time last year, the doors of the Summer of Culture Festival in Bratislava were blown open with a massive Sting concert that rocked the Artmedia Petržalka Football Stadium.

This year's opening act is just as exciting, albeit slighty more low-key.

Tori Amos, the copper-maned American singer/songwriter adored by fans around the world for her boderline kookiness, intimate performance style, and emotional lyrics on envelope-pushing topics, makes her first stop ever in the Slovak capital on June 22. Accompanying her is a full band (the first time she has toured with one since 1999) and a range of keyboard instruments, including her signature Bösendorfer piano.

The concert takes place at the Incheba Expo Centre near the Aupark shopping mall in Petržalka. It is part of the European leg of her American Doll Posse Tour, named after her ninth, and most recent, album, which was released in the US on May 1.

More artistically subtle than Madonna or Nirvana, both of whom also scored groundbreaking albums in the early 1990s, Amos built a sizeable, loyal following by differentiating herself through lyric-based piano music, a style she developed while playing in piano bars as a college student.

Fans find inspiration in her open exploration of topics such as feminism, religion, and sexuality, and consolation in her songs about personal tragedy.

"[She] doesn't go along with the establishment of modern music media," fan Jeff Howell said. "She's a totally different [kind of] artist than what's on mainstream radio stations."

Amos first found mainstream success with 1992's Little Earthquakes, which featured fan-favourite Silent All These Years, a song about finding your internal voice as a woman. But it was the album's confessional Me and a Gun, based on Amos' own real-life rape in Los Angeles at the hands of a gun-wielding fan when she was 22, that caused the biggest stir.

Amos credits becoming a mother with helping her overcome that trauma.

"Motherhood has healed me," she told the contactmusic.com website in 2005. "Several nights a week, every week, after the LA incident, I would have nightmares. I would see somebody come into the room, coming to harm me. It was always life and death - often I would die. But I worked with this English therapist, and when I became pregnant I began to fight back because I didn't want to be a miserable mother."

In 1994, she co-founded RAINN (The Rape Abuse and Incest National Network), a toll-free help line and crisis centre for rape victims.

But with American Doll Posse, Amos has turned her focus to politics.

"Frankly, as a woman, and as a woman who wrote Silent All These Years, I needed to stand up," Amos explained to Chris Harris of MTV News."

The album begins with the track Yo George, which tosses around lines like "Where have we gone wrong, America?" and "Is this just the madness of King George?" The record ends with Dark Side of the Sun, an anti-war track that poses the question "How many young men have to lay down their life and their love of their woman for some sick promise of a heaven?"

To aid the creative process needed for the album, Amos invented five personalities rooted in the women of Greek mythology. There's Isabel, a photographer modeled on Artemis, the goddess of the wilderness and fertility; Clyde, who reflects Persephone, the goddess of the underworld; Pip, based on Athena, the goddess of wisdom and war; and the sensual Santa, who was inspired by Aphrodite.

Publicity photos for the album and world tour show Amos dressed like the personalities, and it's been confirmed she will appear on stage in costume.

"Maybe they've been gestating inside of me for many years now, and it's taken till I got to a certain place in order to be able to mine them and excavate them from the recesses of my unconscious," Amos said of the personalities to MTV News. "I don't know the why of it, but I do know that usually, I make records that have one single thread and a theme coming from one narrative. [On] most of the records, there's usually a center focus. But this was not that[.]"

Check out the next issue of The Slovak Spectator for a review of the Tori Amos concert; For more information on RAINN, or to make a donation, visit www.rainn.org.