TYCOON Juraj Široký, president of the Slovak Ice Hockey Association and an alleged sponsor of the ruling party Smer, was a paid agent of the communist secret police - Štátna Bezpečnosť (ŠtB) - from 1979 to 1990, according to a copy of his ŠtB file that was provided to the Slovak media by the Nation's Memory Institute. 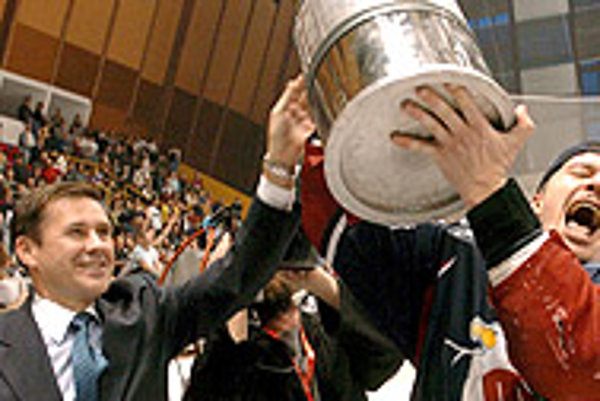 Font size:A-|A+1
TYCOON Juraj Široký, president of the Slovak Ice Hockey Association and an alleged sponsor of the ruling party Smer, was a paid agent of the communist secret police - Štátna Bezpečnosť (ŠtB) - from 1979 to 1990, according to a copy of his ŠtB file that was provided to the Slovak media by the Nation's Memory Institute.

The file shows that Široký, the 53-year-old businessman who was behind the media company Perex, publisher of the Pravda daily, until 2006, applied for enrollment into the secret police on August 30, 1978.

"I want to be as useful as possible to our socialist regime by actively fighting against internal and external enemies," Široký wrote in his application. One year later he was accepted with a starting monthly salary of 2,300 Czechoslovak crowns, roughly equivalent to Sk28,770 (€853) today.

Široký underwent training and in 1985 was sent to work as a clerk at the Czechoslovak embassy in Washington D.C., where he climbed his way up to become the deputy of the "residency" - the ŠtB's local branch in a foreign country. There he was in charge of developing a network of agents and assigning them tasks, which brought him 3,500 Czechoslovak crowns a month, 2,000 crowns more than the average salary and roughly equivalent to Sk43,770 (€1,300) today.

"He gradually became familiar with the demanding situation with the US along the lines of political intelligence," ŠtB Lieutenant Colonel Eduard Plexa wrote in Široký's file. "Široký demonstrates exactness and initiative in his work and processed records show increasing quality."

Široký, who currently runs 14 different businesses, worked for the secret police's intelligence unit for 11 years. He occasionally received bonuses, the highest being 2,500 Czechoslovak crowns for what the secret police referred to as "the high-quality planning and execution of recruitment," Ivan Petranský, chairman of the Nation's Memory Institute, told the Hospodárske Noviny daily. Široký received a total of 15,000 Czechoslovak crowns in bonuses, which was a considerable amount of money at the time and equivalent to roughly Sk187,600 (€5,560) today.

Široký has responded to reports of his cooperation with the ŠtB by saying that he has not done anything that would violate the principles of decency.

"I have several times confirmed for media that I worked for foreign policy service," said Široký. "In every country, the secret police have been and will be part of this service."

However, as recently as June 2006, Široký denied having ever worked for the secret police.

"I never collaborated or worked as an agent for the ŠtB," Široký said in an interview with Hospodárske Noviny. "I worked in the foreign service as an employee of the Foreign Affairs Ministry. This is all I can say about it."

Široký even reported his mother's correspondence with her uncle, Albert Ferdinand, who was living in the US, according to ŠtB files. According to Široký, his mother's brother was the one who made the first contact with their uncle.

"I assume that the brother of my mother made contact with the person named above [Ferdinand] based on the prospect of financial gain, when at that time he was getting divorced and living with a younger woman, who presumably forced him to do so," the report says.

According to ŠtB records, Široký wanted to continue working for the secret police even after 1989, when the communist regime collapsed. However, his request was rejected by the interior minister, Ján Langoš, who later founded the Nation's Memory Institute. Langoš died in a car accident in June 2006. The original copy of Široký's file was lost after Langoš's death, leaving the Nation's Memory Institute only with two notarized copies.

The copies of the ŠtB file are worth nothing in legal terms, Petranský told Hospodárske Noviny.

"Rather, its value is historical," he said.

However, the archive of the Czech Interior Ministry in Prague recently told The Slovak Spectator that facts written in the copy of Široký's file can be verified with records that have been found at the headquarters of the secret police in Prague.

"In the central archive there must be loads of documents linked to him," Radek Schovánek, researcher with the Security Archive of the Czech Interior Ministry told The Slovak Spectator. "The local unit's correspondence with the Prague centre can show what the particular person was working on."

There are only guesses as to what the current whereabouts of Široký's original file are and whether it actually still exists, but a source who wished to remain anonymous told The Slovak Spectator that the file does still exist.

Široký was the co-owner of Harvard Investment Funds, along with Czech businessman Viktor Kožený, who is now living in the Bahamas and is wanted for fraud both in the US and in the Czech Republic. Kožený has accused Široký of laundering and stealing a major part of the funds, coming to more than $100 million, but Široký has repeatedly denied the accusations. Police are taking action based on a complaint filed by Zdeněk Častorál, liquidator of the Harvard Industrial Holding (HPH).

"Fifty million dollars from HPH's resources have shown up in Slovakia," Častorál said.

Široký denies the accusations. Slovak police are also investigating a money transfer of Czech funds to Slovak firms managed by Druhá Strategická, a company of which Široký is a member of the board of directors. The Anti-Corruption Bureau has started a prosecution on the suspicion of fraud.

"We are working on the case and waiting for legal help from several countries," Bureau head Tibor Gašpar said.