THE INCHEBA Expo Centre in Bratislava has hosted some major events, from the Bush-Putin Summit to the country's largest beer festival, but nothing as emotionally charged as the Tori Amos concert on June 22. 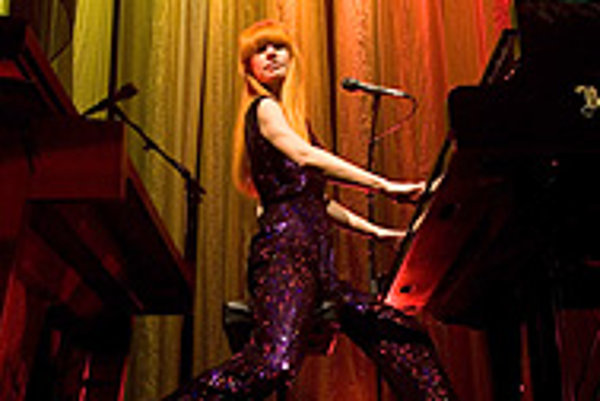 Font size:A-|A+0
THE INCHEBA Expo Centre in Bratislava has hosted some major events, from the Bush-Putin Summit to the country's largest beer festival, but nothing as emotionally charged as the Tori Amos concert on June 22.

The concert's opening act established the evening's theme as an exploration of contrasts, both visual and musical. Singer/songwriter Joshua Radin, like Amos, comes from a rural tradition of plaintive melodies and breathy tones that recall the music of folk legends Bob Dylan and Joan Baez. Radin also shares Amos' gift for imagery that's simultaneously touching and entrancing, though his ride is less turbulent and takes you in for a softer landing.

But 40 minutes after Radin had finished, the lights dimmed again, and Amos descended upon the stage. Well, not Amos exactly, but Clyde, one of the personalities she developed for her most recent record, American Doll Posse.

Modeled on Persephone, the Greek goddess of the underworld, Clyde, Amos says, "wears her emotional wounds on her sleeve ... and is dealing with having been disappointed in her life". Clad in a red two-piece outfit, a wig of stick-straight hair, and black shin guards, she slinked up to her signature Bösendorfer piano like an Arabian dancer, and kicked things off with Bouncing Off Clouds, from Doll Posse.

The song is an intense jeremiad on the frustration that follows a break up. As Clyde, Amos was powerful, pushing down on the piano keys and falling away from the microphone at the end of long phrases. Often, she sat divided between her piano and the keyboard directly behind her, playing on one while singing into the microphone of the other. The effect was eccentric and electrifying, and made it clear we were definitely in a different place than where we had begun.

Though Amos is still not as widely known in Slovakia as some of her contemporaries from the early 1990s, many in the audience were obviously devoted fans. One young man sitting right in the front row practically cheered himself off his seat every time she finished a song, and many in nearby aisles could be seen swaying, and mouthing the words to every song.

Rattlesnakes, from the album Strange Little Girls, was arguably the highlight of the first part. A chilling narrative that tells of a girl named Jodie who "needs a gun these days ... on account of all the rattlesnakes", the song is deeply personal to Amos, who suffered sexual abuse by a fan when she was 22. Its pulse was hypnotic, and Amos expelled each "rattlesnakes" with the sting of a scorpion.

Adding to the whole first part's powerful effect were the lights that blanketed the stage in stars and rich colours during more brooding moments and bathed it in a rainbow of brightness at times of empowerment.

After an interlude, Amos returned to stage as Tori, wearing a glittering, violet dress. Once again, she started with a track from Doll Posse, but then moved on to Crucify, one of her biggest hits from her mainstream debut album, Little Earthquakes.

By this time, her voice had become especially strong. Her high notes were extended and concentrated, and her focus was laser-sharp.

The words really began to pour out during Cornflake Girl, her rousing commentary built on the metaphor of a box of cereal to illustrate the differences between women: some are bland "cornflake" girls, while others are the rare "raisin" girl.

This was Tori at her best - opinionated, passionate, and decisive. The audience couldn't help but move to the music and get caught up in the swirl of its growing intensity.

Among the titles she performed in the solo section was my personal favourite, Winter, a beautiful, piano-based song with haunting lyrics about the passage of time. Amos played with pronunciation and tempo on this one, bending the lyrics to fit the moment and the timing of the chords to create anticipation.

The concert closed with two encores that featured The Waitress, one of her more harsh songs lyrically, but one that captured the feeling of aggression in the air that night.

It's no surprise many Bratislava fans have reported a sense of emptiness that they no longer have a Tori Amos concert in their calendar.