For a Roma soccer coach, black and white make yellow

AT FIRST GLANCE the Roma settlement in Čemerné, a village near Vranov nad Topľou in the Prešov Region, looks fated to isolation. It's located at the end of Cintorínska (Cemetery Street), a dead-end street that lives up to its name. On its other side is a river that has no bridge. And the further in you go, the more deteriorated the blocks of flats become. 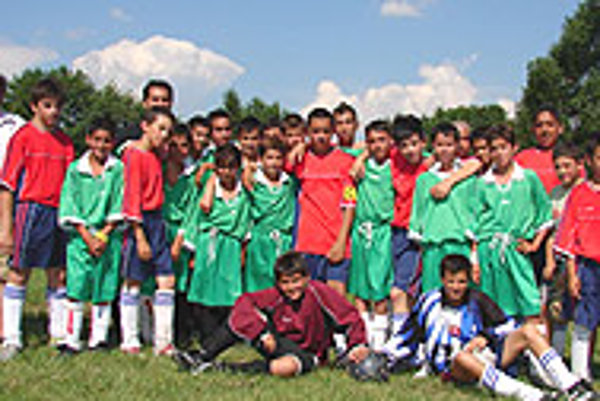 Font size:A-|A+
AT FIRST GLANCE the Roma settlement in Čemerné, a village near Vranov nad Topľou in the Prešov Region, looks fated to isolation. It's located at the end of Cintorínska (Cemetery Street), a dead-end street that lives up to its name. On its other side is a river that has no bridge. And the further in you go, the more deteriorated the blocks of flats become.

Yet the wall of its small water treatment plant bears the graffitti of a community passionate about soccer - proof that its residents defy the stereotypes usually portrayed in the news. The only shouts heard on this street are: "I'm open!", "Kick!", and "Goooooooaal!"

Local teacher Štefan Kaliáš is in the middle of it all. As a little boy, he practiced his soccer moves by kicking bottle caps, and positioned his collection of model cars like players. He watched games between major European teams on his family's old black and white TV, and always hoped the ones with black players would win because they looked "like us".

Since then, he has dreamed of taking a soccer team of his own to the top of the Slovak national league championship.

So after graduating from university, he returned to Čemerné to set up the Roma Východ civic association.

"I've always felt a lot could be achieved in the community through soccer," Kaliáš said. "It has everything these people need - motivation, a good way to spend their free time, the chance to taste success - and it doesn't matter what age they are."

Kaliáš hopes to put together a mixed-race team some day.

"That's why our club's flag has a picture of player on it who's neither black nor white," he said, "but something like yellow".

Kaliáš manages an adult team, but the youth team is especially close to his heart.

"We got some new support recently," he said, pointing at Milan, a non-Roma boy whose family had just moved to Čemerné, while presiding over a match against Čakľov, a neighbouring village. "All the boys attend the same primary school, which has racially mixed classes, but everyone except Milan said they would never play with "n--ers". It's a shame. Our soccer pitch is closer than the one they go to now. Maybe when they're older ..."

As well as receiving financial support from the town, Kaliáš raises money for the junior team through projects and player transfers. He led the effort to renovate an old house, which he rents out for parties. And five players were sold to a club in Lomnica for a thousand crowns each.

"This is the boys' only chance to see things outside Čemerné," Kaliáš said. "Otherwise, they'd just sit here and never move, like most Roma, who stay in one place their whole lives."

But Kaliáš believes the Roma community is changing. With getting a job in the region nearly impossible, many men have moved abroad, to České Budějovice or Newcastle, England.

This could complicate Kaliáš's plans to put together an adult team, but Kaliáš is optimistic.

"I'm not afraid we won't have enough players," he said. "New flats were finished a few months ago. I suppose a new baby will be born in every one of them, even though it hasn't happened in a year."

But one issue that Kaliáš does find troubling is that referees are being bribed and matches bought, even at the highest competitive levels of the local league. And while a few years ago, a piece of good bacon, salami and three bottles of slivovica were enough, now the teams pay as much as Sk7,000 to be sure they "have" the match.

"For some managers, it's still unimaginable to see a Roma team win the league," he said. "They don't even try to hide that they're bribing the officials."

In the meantime, the youth match has ended in a draw, 4 to 4. It was a hard and emotional match, but the outcome is they will have to play a rematch. Soon, rivals are friends again, and the trainers, among them Kaliáš's father, a former soccer player himself, look more sweaty than the players.

"I always come close to a heart attack," he says.

Kaliáš adds: "Even if something happened to the club, I'd set up a new one. I can't stop. So many boys have become good examples for the young ones. But more than that, we simply love the game."