FRIENDLIER for employees and more demanding for employers is the official slogan of the revision to the country's Labour Code that parliament approved on June 28.
A revamped code was part of the deal that Smer leader Robert Fico made with trade unions shortly before the parliamentary elections last year in return for a massive unionist endorsement. The unions said they were content, even though not all their demands made it into the final version of the code. 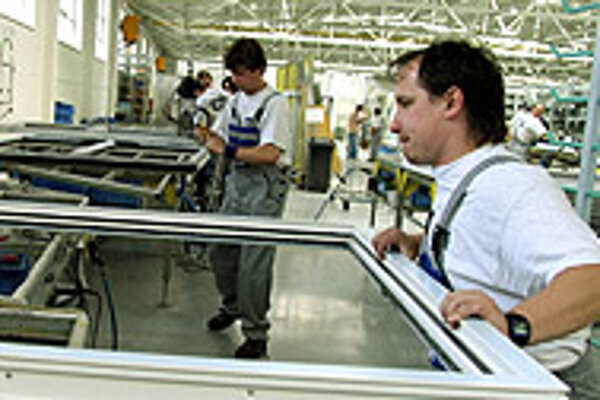 Font size:A-|A+0
FRIENDLIER for employees and more demanding for employers is the official slogan of the revision to the country's Labour Code that parliament approved on June 28.

A revamped code was part of the deal that Smer leader Robert Fico made with trade unions shortly before the parliamentary elections last year in return for a massive unionist endorsement. The unions said they were content, even though not all their demands made it into the final version of the code.

"We are glad that, despite all the complicated negotiations with employers and the government, we have managed to push through the changes, though some only in a compromised form that does not entirely match the original demands of trade unions," Miroslav Gazdík, the President of the Confederation of Trade Unions (KOZ) told The Slovak Spectator.

However, business associations and employers said that the new code might make the labour market less flexible and lay a heavier financial burden on companies.

The Labour Code, which was supported by 83 and rejected by 61 members of parliament, will come into effect on September 1. The new code gives more powers to the unions, limits overtime work, toughens conditions of fixed-term employment contract and limits the use of trial periods before signing a permanent-status contract with the employee. The new Labour Code also bans the employer from terminating a fixed-term work contract without a legal reason and guarantees severance payments for employees who are fired due to restructuring. However, employees now have more power and can, for example, immediately terminate a work contract when their employer refuses to cover the costs of a foreign business trip.

Fico said that all this finally brings the country's labour legislation up to par with European Union standards. Fico thanked his ruling coalition partners for their "maximal correctness" during the law-making process.

"It is important that Slovakia passed a Labour Code that is in favour of the people," Fico told the SITA newswire, adding that the new legislation will not endanger the country's economic growth.

However, Viola Kromerová, General Secretary of the Slovak Trade Industry Federation, which shelters small trades and craftsmen in Slovakia, said that "paradoxically enough, just when the European Commission prefers a flexible labour market, we are going to adopt some measures that will in fact slow down this trend."

It was a success a couple years ago when the socialistically-tuned Labour Code was finally adjusted to the requirements of the market economy, Kromerová said.

"However this [current] revision is a step backwards and a continuation of legislative instability in Slovakia," Kromerová told The Slovak Spectator. "Each change affects the weakest units of the economy, private tradesmen, the most. It is very difficult to build up a company when the laws are changing two or three times a year."

"There is far too much protection for employees just when we are fighting for a qualified and competent work force," Kromerová said.

"Labour flexibility is important and tradesmen cannot afford to employ someone full-time for every activity," she said. "Also, many are still trying to find their position on the market and just one trade does not earn them a normal living. They themselves have to be flexible, but can they if the law binds them?"

However, trade unions say that employers have still not submitted any definite arguments to support their claims that the flexibility of the labour market will suffer.

"We see their statements as unjustified protests against the actions of the government, which has been trying to return to employees the legal status that the original Labour Code guaranteed them before it was amendmended in 2003," Gazdík told The Slovak Spectator. "In some areas the code strengthened the position of the employees just to what it is in other countries."

Former prime minister and Chairman of the Slovak Democratic and Christian Union Mikuláš Dzurinda said the new Labour Code could have been much worse, adding that his party might still try to amend the code that has just been approved.

The ruling coalition's Jozef Halecký of the Movement for a Democratic Slovakia (HZDS) also said that further amendments were a possibility. It was Halecký, chairman of the Parliamentary Social Affairs Committee, who pushed for changing the originally proposed 48-hour work limit for the health care employees to 56 hours and the proposal made it into the approved version.

"I don't think this is the final version," Halecký told newswire TASR. "If we discover that something harms labour flexibility, we're ready to change it."

KOZ chief Gazdík said he is convinced that such statements are unjustified, adding that the revision presents a European standard and many of the changes were made to harmonise the law with EU legislation.

However, the National Union of Employers (RÚZ) said it is not giving up the fight for what they believe would be a more just Labour Code.

The employers tried to meet with President Ivan Gašparovič to make him veto the law. Their chances seem to be rather feeble since Gašparovič has already said that the law is the best that Slovakia could have possibly produced under the given conditions.

"The Labour Code is inimical to the business environment and incompatible with the necessity of catching up with the developed world as quickly as possible," reads the joint declaration of the RÚZ and the Slovak Association of Employers (AZZZ).

The Slovak Association of Entrepreneurs (ZPS) also disagrees with the revision of the Labour Code. The amendment represents higher costs for employers, restricts contractual freedom and does not secure a balanced legal relationship between employers and employees, ZPS president Ján Oravec said.

The employers have also said that the unions often present themselves as victims rather than partners of the employers and businesses, which, according to them, creates an unhealthy relationship between the two.