PART-TIME students will now have to pay for their courses at Slovak universities, according to a revision to the University Act passed by parliament on July 4, after many long discussions on whether public universities in Slovakia should continue providing education free of charge. 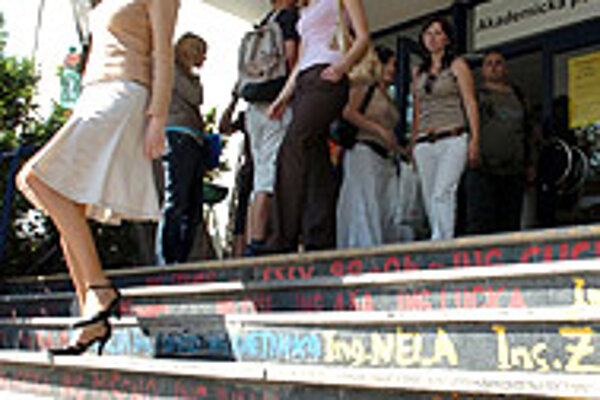 Font size:A-|A+0
PART-TIME students will now have to pay for their courses at Slovak universities, according to a revision to the University Act passed by parliament on July 4, after many long discussions on whether public universities in Slovakia should continue providing education free of charge.

The revision, which will permit schools to charge some part-time students for their studies starting on September 1, 2008, came after the head of the ruling Movement for a Democratic Slovakia (HZDS), Vladimír Mečiar, reached an agreement with Education Minister Ján Mikolaj of the co-ruling Slovak National Party.

Mečiar had unexpectedly vetoed a revision to the university bill in late June, suggesting that charging students for their education would go against the constitution. The HZDS told the Sme daily that the party had "grave reservations" about the bill.

Though the bill was not passed in its original version, Mikolaj was still satisfied with the bill's approval, Education Ministry spokeswoman Viera Trpišová told The Slovak Spectator.

However, his predecessor, former education minister Martin Fronc of the opposition Christian Democratic Movement, said the legislation was a rather unpleasant summer-holiday present for students.

According to the new legislation, the state will set the number of part-time students it can sponsor each year and universities will be able to collect tuition fees from the rest. The schools will also have the option of admitting more students if they can afford to finance their own education. Those who will be charged for their courses will be able to take a loan from the Student Loan Fund with special interest rates.

"The revision solves the fundamental problems of universities in Slovakia," Vladimír Báleš, rector of the Slovak University of Technology in Bratislava and the president of the Slovak Rector's Conference, told The Slovak Spectator.

"The partial charge is just a marginal issue, which has been over-politicised," Báleš told The Slovak Spectator, adding that he hopes the legal fees will "heal some of Slovakia's schooling ills".

The most serious concern among the general public and the government has been situations where schools have asked part-time students to make payments or donations to third parties, in effect paying for the courses but still not violating the letter of the law.

A recent example was when the Education Ministry called on the rector of Trnava University, Martin Mišút, to stop taking money from part-time students, the Sme daily reported on June 6. If the school had continued in this practice, it would have received up to a Sk5 million (€149,259) fine from the Education Ministry. The Supreme Audit Office discovered cases where the Trnava University's Faculty of Health and Social Work had received money from part-time students in 2005, even though it did not have the right to.

"Students paid [the school] for their studies in the form of donations, gifts," the Supreme Audit Office wrote. The faculty broke the law on higher education when it "acquired, divided and used financial resources from part-time students," according to the Audit Office.

The ministry originally wanted to limit university teachers to teaching at only one university, but the requirement was dropped and now teachers can teach courses at several schools at the same time.

However, the Slovak Rector's Conference does not like the so-called "flying teachers model". The conference proposed a model under which teachers could only work full-time at one university and part-time at another university with the approval of the dean or the rector, Báleš said.

"These so-called 'flying teachers' lower the quality of the studies," Báleš said.

MP Ferdinand Devínsky of the opposition Slovak Democratic and Christian Union, who also served as a university rector in past, said that this government would go down in history as the first one that made students pay for their studies, reported the Pravda daily.

"The socialists installed tuition fees and lied to their student-voters before the elections," Fronc said.

"We need a completely new university act that will solve the problems of universities in a comprehensive way," Báleš told The Slovak Spectator, adding that there will hopefully be a new act in two or three years.