THE THIRD phase of the Warhol City Project, with a budget of about Sk60 million, is being prepared by the town of Medzilaborce in the Prešov Region. 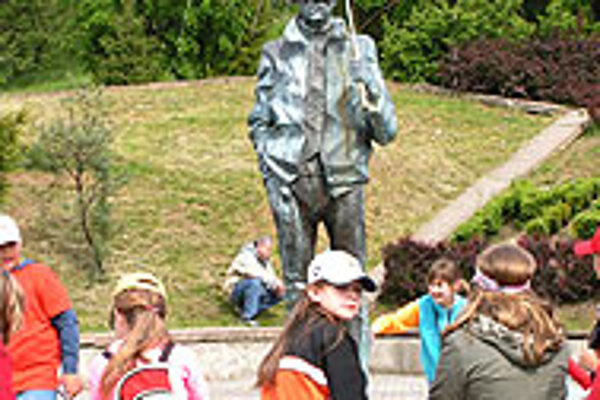 THE THIRD phase of the Warhol City Project, with a budget of about Sk60 million, is being prepared by the town of Medzilaborce in the Prešov Region.

"The most important part of the project will be the marketing," Vladislav Višňovský, director of the town's state administration bureau, told the TASR newswire. "We will put up billboards, promotional materials and books about our town and the museum of the pop-art king Andy Warhol, not only around Slovakia, but also in [other] European countries."

The project's third phase involves the renovation of the museum, the amphitheatre grounds and the sports fields. If the proposed project is successful, it will begin to be implemented in 2009.

The first and second phases, which cost more than Sk30 million, included repairs to the facades of houses in Medzilaborce, the construction of an open-air folk museum that includes a small church and classic country houses, the reconstruction of the amphitheatre's auditorium, repairs to local pavements and around 100 new parking places.

PREŠOV Mayor Pavel Hagyari wants the old salt-works of Solivar in Prešov, currently cared for by the Slovak Technical Museum in Košice, to come under the city's administration, and has already started negotiations with the Culture Ministry regarding the city taking over the historical site or at least leasing it.

Solivar custodian Marek Duchoň told the SITA newswire that there have been around 7,000 visitors since the beginning of 2007 and the yearly average is around 10,000 visitors. It is open all year but its peak season begins in April and at the moment most of their visitors are children on field trips. However, during the summer, almost all the salt-works' visitors are foreigners.

Duchoň said that thieves have been gradually stealing parts of the roof and fences. When asked who could better administer the historical monument - the museum, or the city of Prešov - he refused to answer.

THE WORLD Congress of Ruthenians (SKR) has stated that teaching the Ruthenian (Rusyn) language in primary schools will remain one of their high priority goals for the next two years. The congress released details of the program to the TASR newswire at their ninth Annual Assembly on June 21-24 in the Romanian town of Sighetu Marmatiei. The SKR is made up of organizations from 10 countries, including Slovakia.

SKR spokesperson Alexander Zozuľák made the announcement at a press conference on July 2. Zozuľák emphasised that the development of the minority's schooling and education was one of the vital conditions for the continuing existence of Ruthenian culture and language.

SKR delegates also unanimously approved a petition to Pope Benedict XVI asking for acknowledgement of the Ruthenian Greek-Orthodox Church sui iuris in Slovakia and to appoint a Ruthenian bishop. The petition was signed by all members of the SKR.

Slovakia is represented in the SKR by two organizations: The Ruthenian Resurgence in Slovakia (ROS) and the Slovak Association of Ruthenian Organizations (SARO). There is also a Society for Ruthenian Youth headquartered in Prešov. Its chief stated goal is the creation of a website to inform the public of the activities of Ruthenian youth.

CONSTRUCTION of the largest sewage project ever in eastern Slovakia has begun in Prešov. Waterworks worth more than Sk1.7 billion (€50.7 million) will bring drinkable water and a sewage system to more than three dozen towns and villages in the Torysa river basin. The project, according to the Hospodárske Noviny daily, is co-financed by the Cohesive Fund of the EU and is expectd to be completed within two years. By 2011, almost 45,000 households should be connected.

The Slovak government will finance 12 percent of the project, while eight percent will be covered by the regional water utility, Východoslovenská vodárenská spoločnosť (VVS). Construction has been delayed for more than a year because of legal disputes over ownership rights. This year, around half a billion crowns will be sunk into the project.

However, there are problems. The project leaves many small villages out of its network because support from euro funds goes only to towns and villages of more than 2,000 inhabitants. "Out of more than 900 villages and communities administered by VVS, only about one-tenth fulfills this condition," said Stanislav Hreha, general director of the VVS.