I ARRIVED at the edge of the Poľana Biosphere Reserve late in the afternoon. Dusk is a good time for birding, so I put on my boots, grabbed my binoculars, and headed out for a walk. The sounds of Black Redstarts, yellowhammers, and European Goldfinches immediately caught my attention. I enjoyed nice views of these birds flitting around the green terraced fields of Bystré (near Hriňová). 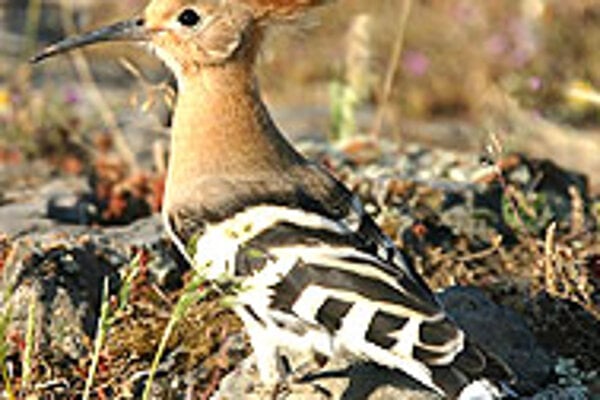 Font size:A-|A+
I ARRIVED at the edge of the Poľana Biosphere Reserve late in the afternoon. Dusk is a good time for birding, so I put on my boots, grabbed my binoculars, and headed out for a walk. The sounds of Black Redstarts, yellowhammers, and European Goldfinches immediately caught my attention. I enjoyed nice views of these birds flitting around the green terraced fields of Bystré (near Hriňová).

When I arrived at the ridgeline, I heard a beautiful song reminiscent of the Baltimore Orioles back home. Sitting atop a grove of trees down slope was one of Europe's most attractive birds - a male Golden Oriole. Because they often hide in foliage, the Golden Orioles can be difficult to spot, but I got a clear sighting of this bright yellow bird.

I have birded throughout Europe and am convinced that Slovakia is among the best places to see avian life on the continent. Birds here have not been hunted and trapped as extensively as in other countries. Hence, they're less shy. The country's numerous protected areas attract a variety of birds, including several rare species of owls, woodpeckers, and eagles. Combining a trip to Slovakia with a trip to the Neusiedler See (near Vienna airport) yields more than 150 species of birds in one visit.

On my second day of birding, we spotted a pair of Lesser Spotted Eagles flying above Poľana Mountain. Never having seen one before, this was a "life bird" for me. Dr. Peter Lešo, a faculty member at Zvolen University, later informed me that there are 500-600 nesting pairs of these eagles in Slovakia. Soon after, we spotted a Green Woodpecker. In past walks, I have been able to see several different woodpecker species around Poľana in a single walk, including the Black, the Middle Spotted, and Lesser Spotted.

On another morning, I was helping my mother-in-law weed her fields by hand, when I looked up to see a pair of linnets foraging right in front of my nose. These birds have a splash of red on their breasts. I also saw buzzards, fieldfares, Red-backed Shrikes, and the ever-present magpies, which terrorize other birds by raiding their nests.

Those unfamiliar with birding think it's mainly about looking through binoculars, but a good birder employs multiple senses, especially hearing. In central Slovakia, I enjoyed listening to the familiar call of the cuckoo, the squeaky notes of the Blue Tit, and even the squawk of Ring-necked Pheasants. Many of Europe's composers have been influenced by bird songs, including Mozart and Beethoven. Seeing a skylark rising above a field in Slovakia gives me a finer appreciation of the Ralph Vaughan Williams piece The Lark Ascending.

Every birder has a list of so-called "nemesis birds" - relatively common species they have not seen. Before this trip, the hoopoe was my main European nemesis. I had heard one last year but failed to see it. For much of the trip, I grumbled about the hoopoe, a bird that migrates to Europe from Africa and feeds in open pastures. With its grand crest and black, white, and pink feathers, it is one of Europe's most striking birds.

One day, we got lost hiking on some tracks near Bystré. While chatting with a local farmer, I scanned a nearby cow pasture with my eyes, and noticed a bird with a flying pattern similar to Northern Flickers found in North America. Oblivious to my presence up slope, the bird landed. There, in perfect view, was my hoopoe.

Slovakia gave me the best view of the hoopoe, along with many other birds, which is why it is my favourite place to bird in Europe. It's not so much the quantity of species seen but the quality of the sightings, and the beauty of Slovakia's natural environment, that keeps me returning.