WITH STAG party season in full swing, it is just about impossible to stroll around Bratislava's Old Town on a weekend without seeing large groups of inebriated male foreigners carousing in the streets. 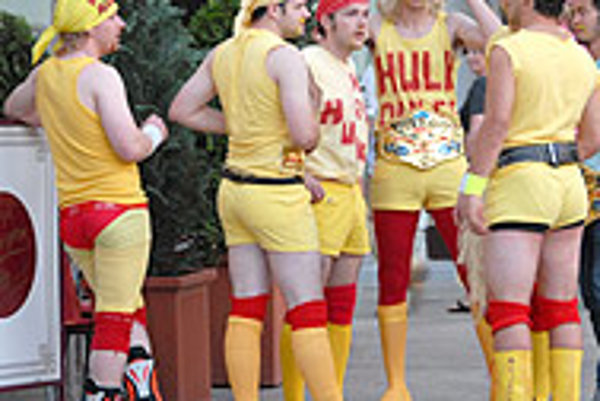 Font size:A-|A+
WITH STAG party season in full swing, it is just about impossible to stroll around Bratislava's Old Town on a weekend without seeing large groups of inebriated male foreigners carousing in the streets.

After the May arrest of a British stag caught naked in a fountain, stag trips to Bratislava - vacations for grooms-to-be and their friends centred on alcohol, strippers and other such activities - have been getting even more attention, locally and in the British media.

But local authorities, tour organizers and the British Embassy are joining forces in an effort to keep stag party rowdiness from escalating into criminal offences or other serious problems.

"We're working together to try to contain the problem," said Tom Carter, charge d'affaires of the British Embassy.

Stag trips are a popular way for young British men to celebrate their "last night of freedom", drinking and partying for far less money than they would spend at home. Trips include daytime activities, pub crawls, strip bars and plenty of alcohol.

Stag tourism is not a new phenomenon in Europe. Starting in the 1990s, destinations like Amsterdam and Barcelona became popular party cities for celebrating stags. Then the trend moved further east, to places like Prague, Budapest and Tallinn, Estonia.

With cheap flights from England on budget airlines and a growing reputation for cheap alcohol, Bratislava joined the list of stag hotspots around two years ago.

Bratislava Stags, a locally-owned and operated tour group, has booked 270 trips so far this year. That adds up to nearly 2,800 revellers from March to June, with another 800 expected for July.

Bratislava Pissup Tours, part of the international Pissup chain, has sent nearly 100 groups to Bratislava so far this year, and more than 200 in 2006, their first full year. The average group has about 12 to 14 people, said marketing manager Jacy Meyer.

Those numbers do not include other local and foreign-based stag tour companies, and the unaffiliated stags who book their own trips. With those kinds of numbers, it's no surprise that some local residents are feeling the pressure.

"Bratislava is a very small city, compared to other big city-break metropolises," said City of Bratislava spokesperson Milan Vajda. "When there are 1,000 or 2,000 British gentlemen in this historical city, it can be felt."

Jonathan Hill, a British web developer and occasional English teacher who has been living in Bratislava for two years, does not spend much time downtown. But he notices stag parties when he does.

"I know that when I'm there with my friends, having a nice meal, they can be quite loud and obnoxious," he said. "My girlfriend is Slovak, and there was one time with a couple of louts - I won't repeat what they said, but it was quite offensive to my girlfriend. I think they thought we were all Slovak, and then when I started talking to them in English . . . they were quite surprised.

"It makes me embarrassed to have a British passport sometimes."

Vlado Jančovič has heard the complaints about stag tours, too. He lives here, but he also works as a marketing manager for Bratislava Stags.

But Jančovič draws a distinction between groups like his, which organise activities and offer guided pub crawls for stag revellers, and tourists who plan their own stag dos without drawing on local expertise.

Bratislava Stags arranges activities during the day - such as shooting machine guns at firing ranges or white water rafting in Čunovo - to give stags something to do besides drinking in a pub all afternoon, Jančovič said. And groups are always accompanied by guides who can try to keep bad behaviour in check.

"If we see that our group is behaving not good, the guide is there to tell them, 'Guys, this is not good manners,'" he said. "We're trying to explain, you can drink, talk to girls, do whatever you want to do, but behave normally."

The Pissup tour group posts information about all their destinations on their website to try to educate visitors about the city before they arrive, Meyer said. Stag groups also have guides on call 24-hours a day, and they are encouraged to book pub crawls at group-friendly places.

"We do ask them to be respectful of their hosts," she said. "We do encourage them to utilize us as a resource, and ask us where to go, and arrange activities to give them something else to do."

Stag tour organizers emphasize cheap drinks and attractive women on their websites. But Meyer says that does not encourage disruptive behaviour.

"Yes there will be heavy drinking, but you can go out and drink and have a good time without destroying an entire city, or even a pub," she said.

Stag groups may be noisy and sometimes offensive, Vajda said, but he knows of few if any incidents where their behaviour has escalated into fights or other acts of aggression that involve other people.

Mallone was sentenced to two months in jail for disorderly conduct, but freed on June 7 and made it home in time for his wedding. Carter said it was the first incident where a British national had been jailed here for more than a week.

Last summer, the Schöner Náci statue near the main square was pushed over by a group of English-speaking men, according to witnesses. The fall broke off the statue's top hat and caused other damage. It cost about Sk100,000 (€2,923) to repair. The men were never found.

In cases like this, the city makes no exceptions for foreign residents who break the law, Vajda said. But he emphasised that the city is also working to head off such incidents before they happen.

One aspect of that is increasing the number of police officers on patrol in the Old Town on weekend nights, to demonstrate an increased presence, Vajda said. The British Embassy also offered a program to city police to improve their English language skills, and provided leaflets to police officers with phrases they might hear from English-speaking tourists who are lost or in trouble.

Fifteen police officers took part in the English-language program, which wrapped up this spring, Carter said. There are plans for similar programs in the future.

The embassy has also worked with tour group operators, like Bratislava Stags, to distribute information leaflets with common phrases in Slovak and tips for good travel relations. They range from common-sense travel tips like carrying a copy of your passport, to asking visitors to refrain from loud and abusive language, vandalising monuments and urinating in public.

The awareness campaign, similar to British Embassy programs in other stag-heavy cities, also included posters and beer mats with travel tips that were distributed to pubs and other prime tourist locations.

"The anecdotal evidence that is coming to us is that despite the one arrest, the problem is actually reducing slightly," Carter said. "It's still a problem, but it does seem to have peaked."

Not everyone who lives in Bratislava complains about the stag tourists, though.

"I really don't like when the British guys are destroying the town, especially the statues," said Martin Sacha, a financial analyst who lives in the Old Town. "On the other hand, when they're drinking in a pub and having fun, I really don't care because everyone wants to have fun.

"Sometimes there is a little bit of noise from the street, but that's normal for the city centre."

Carter pointed out these tourists also pour a significant amount of money into the local economy.

"The bars say to us, these groups are fantastic customers," he said. "When they behave well - and most of them do . . . - they spend a lot of money.

"There's a lot of economic activity behind this phenomenon, which is beneficial to Bratislava."

Jančovič acknowledged that as long as people come to Bratislava to drink and celebrate, the situation will never be perfect.

"Clients are all different," he said. "You will never know how one will be until they get here.

"Maybe it will never change, but at least we're trying to do something with the client. We can say, 'You can behave badly back home - do it there.'"

And Vajda added that the British are a lucrative tourism market for cities like Bratislava. He noted that traditional stag hotspots, like Prague and Barcelona, became more popular with tourists in general after stag parties started visiting.

"Paradoxically, these days there are a lot of stags in the city, but it may result in more interest in Bratislava," he said.