THE FOLK music and dance festival in the village of Východná in the Žilina Region returned from June 29 to July 1, a year after it was cancelled due to delays in the construction of its new premises. 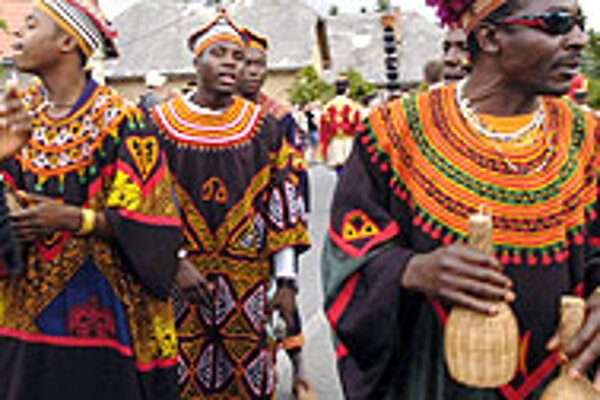 Font size:A-|A+
THE FOLK music and dance festival in the village of Východná in the Žilina Region returned from June 29 to July 1, a year after it was cancelled due to delays in the construction of its new premises.

Slovak President Ivan Gašparovič and Culture Minister Marek Maďarič were among the thousands of visitors in attendance. In order to preserve the festival, the Culture Ministry had taken the unusal step of becoming one of its organizers.

Everyone seemed more than satisfied with this year's event.

Nonetheless, some aspects of the festival did not go as planned because the new premises have not been entirely completed yet. For example, the congress centre will not be finished until next year.

As late as the weekend before the festival, some of the performers were still getting used to the new amphitheatre, which is bigger than the previous venue.

"We were at home in the old amphitheatre," Hamar said.

"The new premises mean better conditions for the performers," Mária Kubíková, head of the organizing committee, told the Spectator.

Fortunately, the weather stayed favourable during most of the festival. A short storm spoiled only one event, a parade through the village, and it rained during one show. Weather is traditionally one of the most important factors affecting attendance, which organizers estimated at more than 25,000 people this year.

Hamar was pleased with the atmosphere.

"Instead of getting bored during the 15-minute technical break between performances, the audience on Saturday night started a wave and to sing the folk song Na kráľovej holi. It was very moving."

Hamar also said it was like a dream come true to see the performers and audience sharing in the mood and common values.

Organizers prepared 30 shows and accompanying programmes this year. Performers numbered about 1,300, including about 200 from abroad. The main objective of the festival is to present amateur folklore ensembles.

Apart from Slovak ensembles, the festival featured foreign troupes, such as the impressive Romafest Gypsy Ensemble from Romania and the exotic Galena Juju Dance Group from Cameroon, which danced in traditional outfits to great applause.

This year's festival signalled the arrival of a generation of excellent young singers, musicians, dancers, and in particular, creators and choreographers.

"My personal feeling about the last few years was that it was on a downward trend," Hamar told the Spectator.

The amateur performers confirmed that the amateur folk scene has a strong foundation and will continue to for years to come.

Hamar also expressed satisfaction with the audience's reaction to the Good Music show, which featured music inspired by the folk genre. The performers were Nebeská Muzika from Terchová and jazz-ethno ensemble Bashavel, the latter of which brought the audience to its feet.

Exhibitions and workshops for children and adults were another inseparable part of the festival. This year, the displays featured art inspired by tinkery, while others were dedicated to shepherding and folk arts. Five folk wood carvers created giant sculptures directly on the premises.

The cost of the new amphitheatre is estimated at Sk100 million, which is being covered by EU structural funds, the village budget, and the state budget. It was built in the style of a Liptov village.

The plan for next year is to complete the premises and develop a long-term concept for the festival.

"We need one that lasts not only for next year, but for at least the next two, three or four," Krupa said, adding that an event can only improve if it keeps looking ahead.