ACADEMY AWARD-winning directors Roman Polanski and Jiří Menzel were honoured with Golden Camera Awards for Lifetime Achievement at the 15th Artfilm Festival, which took place in the spa town of Trenčianske Teplice and Trenčín from June 22 to 30. 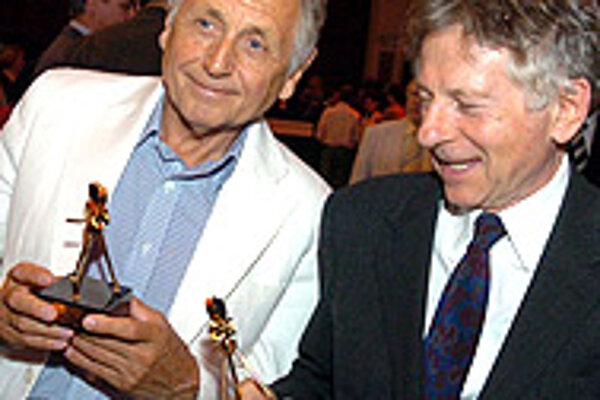 Font size:A-|A+0
ACADEMY AWARD-winning directors Roman Polanski and Jiří Menzel were honoured with Golden Camera Awards for Lifetime Achievement at the 15th Artfilm Festival, which took place in the spa town of Trenčianske Teplice and Trenčín from June 22 to 30.

"I'm always gratified to receive an award because it means my work is respected," Polanski said.

"I'm glad that even though I ventured out into the world, I always remained at home," Menzel said, recalling the common history of the Czech and Slovak Republics.

Considered Slovakia's most important film festival, Artfilm featured 150 films, documentaries, shorts and student films from around the world in eight sections, four of which were competitive.

Slovak actor Marián Labuda was one of three who received the festival's Actor's Mission Award, and among the first people to issue his congratulations to Menzel and Polanski.

Prizes were also awarded to the best films in the competitive sections.

In the end, the international jury led by Iranian film director Jafar Panahí concluded three features were of equal quality, so it awarded them a special Jury Prize and two Blue Angels.

"The jury would like to say how it impressed it was with the high quality of feature films," Panahí said at the ceremony. "After seeing all the competing films, and an exhaustive discussion on the quality of each, the jury eventually decided three were of equal quality."

Kiril Mikhanovsky received the Blue Angel for Best Director for Fish Dreams, a co-production by Brazil, Russia, and US that the jury felt displayed a tender, memorable, and simple narrative, powerful images, and attention to the details of daily life in a remote part of the world.

The second Blue Angel Award for Best Director went to Srdan Golubović for The Trap, co-produced by Serbia, Germany, and Hungary. The jury appreciated its expressive narrative and commentary on societal values through acting and directorial storytelling.

The special Jury Prize, an Honourable Mention, went to It's Winter, which was directed by Rafi Pitts and produced in Iran. The jury was struck by the director's method of creative and artistic structure to discuss issues facing society, the film's outstanding camera work, and the director's artistic boldness.

The first of the Actor's Mission Awards went to Serbian actress Mirjana Karanović, who Slovak film fans know for her roles in the films of Emir Kusturica and Grbavica by Jasmila Žbanić.

The second was given to French actress Isabelle Huppert, whose name had been enshrined into the Trenčianske Teplice Bridge of Fame on June 28.

A concert of Balkan music by Goran Bregović on June 29 was the highlight of the festival's accompanying programme. The fiery tunes played by his Wedding and Funeral Band made the 5,000-strong audience dance, including the jury and Polanski.

Festival organizers have already started planning for next year.

"We are already speculating and thinking over what next year will be like," art director Petr Svoboda told the ČTK newswire after the festival. "This is the only way to get over the nostalgia."