PRIME Minister Robert Fico and Interior Minister Robert Kaliňák have criticised the latest annual report from Transparency International Slovakia (TIS), which says the continuing fight to reduce corruption in Slovakia is at risk. 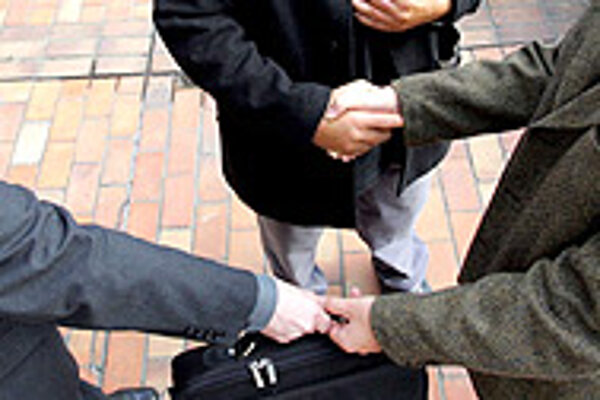 "The theoretical brooding of TIS, and various other commissions, cannot help anybody now," Fico told the Sme daily on July 6. "And I do not think in the least that the environment could be worse than in the past. But I clearly understand the main representative of this organisation and her intentions."

Fico was referring to the president of TIS, Emília Sičáková-Beblavá. Sičáková-Beblavá is married to Miroslav Beblavý, who was the deputy minister of Labour, Social Affairs and Family for the Slovak Democratic and Christian Union (SDKÚ) government.

Fico also told media, "I only care about whether we can catch people red-handed during [acts of] corruption."

But TIS' lawyer, Pavel Nechala, said such a position is wrong.

"This government says it will punish perpetrators, so it means that it wants to improve enforcement," Nechala told The Slovak Spectator. "But that does not take care of other things, especially not systematically limiting the room for corruption."

Sičáková-Beblavá told the media that in contrast to the current government, the previous one based its anti-corruption fight on systemic reforms. Nechala agrees with this approach.

"Yes, [the previous government] formed an anti-corruption program: a set of measures that could be examined and which were gradually adopted at the ministries," he said. "There was a system involved, and changes were made that finally brought a decrease of corruption in society."

Kaliňák, like Fico, denied that the current government has not made systemic steps towards preventing corruption.

"I do not know how [TIS] came to the conclusion that the situation has deteriorated," he said. "Probably due to a need to criticise. But the results are better [than they say].

"TIS supported [former] justice minister Daniel Lipšic, who saw the fight against corruption mainly from a PR point-of-view," Kaliňák continued. "For example, he didn't do anything about trial delays. We intend to work more and talk less, and the results that have been achieved in this period show us that the situation is evidently improving."

Nechala said he does not see anything wrong with Lipšic having made the fight against corruption part of his agenda.

"We would surely be happy if Mr Kaliňák made it part of his agenda." Nechala said. "If he could at least propose some systematic anti-corruption measures, like Lipšic did. He does not have to agree with [Lipšic], but we expect him to come up with his own solutions."

The minister has been authorised to co-ordinate work on anti-corruption measures since April, Nechala said. The problem is that the current government has not yet introduced any conceptual solution for continuing the previous government's work to decrease corruption in Slovakia.

He stressed that although the government has formed a commission to work on anti-corruption measures, it has only met once.

However, Nechala said the current government still needs time to be better informed about the problems.

"The point is that, in contrast to what the government declares officially, dealing with corruption is not its priority," he said.

TIS has already noticed several corruption-related problems with the current government this year, Nechala said. He considers the gravest problem to be the questioning of the Constitutional Court.

"So it can be supposed that some measures from the past are a thorn in the current government's side," Nechala said. "However, this government has not yet come up with its own proposals."

The government has also demonstrated an increase in the practice of using public finances for private purposes, he said, including cases of politicians' relatives using government cars or the unsound handling of public resources.

"I mean, for example, Viera Tomanová, the minister of labour, social affairs and the family," Nechala said. "She flew to Portugal and at the same time sent a state-owned car with a driver."

The number of political-based nominations to specialised positions under the government's control has risen steeply, too, he said.

"It undermines the professionalism of individual positions," Nechala added.

The TIS report noted that neither this government nor the previous one succeeded in resolving the issue of MPs' legal immunities, which protect them from being prosecuted for possible crimes, nor did it deal with the Conflict of Interest Act, which many analysts consider to be insufficient.

Nechala said there is a consensus between the ruling coalition and opposition on these two issues, which prevents them from adopting truly fair and effective legislation.

"This is the third successive parliament that has tried to fix the Conflict of Interest Act," Nechala said. "It always fails with the magic phrase, 'There was no political will.' And there is no political will to resolve the immunity issue, either. The point is simply that both the opposition and the coalition would stand to lose."

Despite the report's criticisms, the current government's achievements were not forgotten.

"We evaluated positively the continuation of some of the Justice Ministry's activities - the effort to shorten delays in court trials and also the publishing of the courts' verdicts," Nechala said. "We also positively ranked the effort to improve the monitoring of the legislative process. The justice minister has announced an effort to create an independent body that could eliminate the false solidarity that exists among lawyers and court executors."