Slovan investigated over violence in Vienna

A BINGE of violence and destruction by Slovak football fans at a match in Vienna could result in harsh penalties against the ŠK Slovan Bratislava club.
At the July 7 game between Slovan and SK Rapid Wien, Slovan fans fought with their rival supporters at Gerhard Hanappi Stadium, set seats on fire and tore down a fence in the stadium, according to media reports. 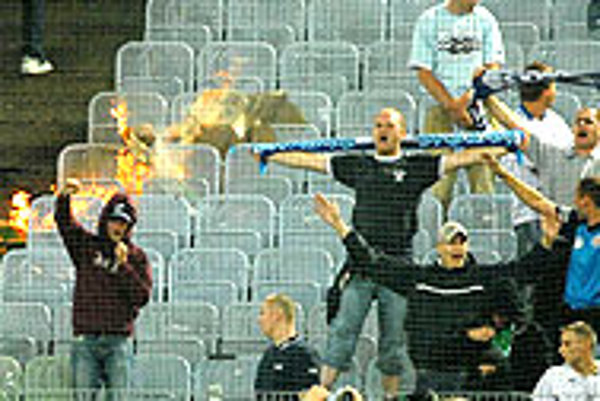 Font size:A-|A+
A BINGE of violence and destruction by Slovak football fans at a match in Vienna could result in harsh penalties against the ŠK Slovan Bratislava club.

At the July 7 game between Slovan and SK Rapid Wien, Slovan fans fought with their rival supporters at Gerhard Hanappi Stadium, set seats on fire and tore down a fence in the stadium, according to media reports.

They also brawled in the streets before the game and caused an estimated Sk15,000 (€450) worth of damage to the train that carried them from Bratislava to Vienna, the Hospodárske Noviny newspaper reported.

The Union of European Football Associations (UEFA), Europe's governing football body, launched an investigation into the violence. The group's control and disciplinary body was to announce its ruling on the evening of July 12.

UEFA press officers did not comment on what the penalties for either side could include, but a spokesperson has publicly speculated there could be a fine against Slovan, and the club could even be forced to close its home stadium.

Slovan spokesperson Martin Urmanič said his club denounces the violence and would co-operate with the investigation. But he said Slovan was not responsible for what happened in Vienna.

"This was a sector of our fans," he told The Slovak Spectator. "But the responsibility for security [belongs to] the organiser of the match and the stadium, which means Rapid Vienna."

Anywhere from 1,200 to 2,000 Slovan supporters travelled to the game from Bratislava, Lepuschitz said. Of those, about 300 were "very aggressive".

Urmanič said Slovan does not support this behaviour.

"We are really, really happy to have fans who are travelling with their team out of the city when they have a match out of Bratislava, or even out of the country," he said. "On the other hand, some individuals have a problem with their behaviour.

Urmanič himself took to the field at Hanappi stadium with a megaphone at half-time and after the game to ask Slovan fans, in Slovak, not to cause problems in the stadium or in the streets, he said.

Vienna police got word from their counterparts in Bratislava that potentially aggressive Slovan fans were planning to come to the match, Lepuschitz said. As a result, three Slovak officers travelled to Vienna to help police the match. One was stationed at Vienna police headquarters and the other two were stationed with the fans.

"Next time if they come by the Danube and are aggressive at the station on the Danube, we will be better prepared," he said.

Slovan and Rapid were to meet again on July 14 in Bratislava for the second leg of their Intertoto Cup match. (Rapid won the July 7 game 3-1.)

Urmanič said the Slovan club, as always, was in contact with the official fan groups ahead of the game to ask for their co-operation in ensuring good fan behaviour. But they were also preparing stronger security measures to make sure what happened in Vienna did not happen here.

Meanwhile, Viennese police are keeping records of the fans who were arrested or causing trouble at the game, Lepuschitz said.

"The next time, we plan to not allow them into the football stadium," he said.

The UEFA investigation considered accounts of the events from the clubs, referees, match delegates, security officers and other sources, a UEFA spokesperson told The Slovak Spectator.

There have been a number of similar bouts of hooliganism at recent UEFA matches. On July 11, UEFA expelled the Legia Warszawa team from the Intertoto Cup and banned them from competition for one future season after their supporters fired "missiles" and battled police during their match with Lithuanian club FK Vétra in Vilnius.