NOVOHRAD, a region that includes parts of southern Slovakia and northern Hungary, serves as proof that when it comes to regional development, national borders do not have to stand in the way. 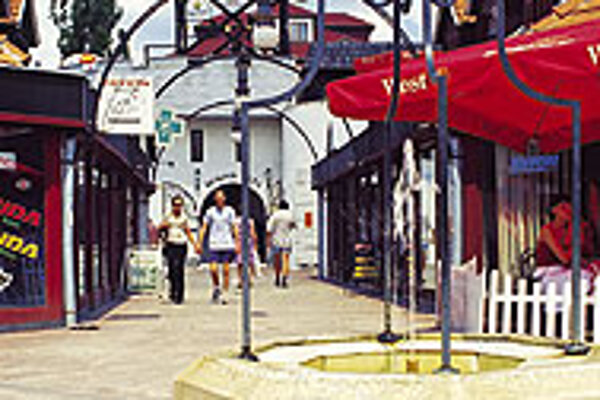 Font size:A-|A+0
NOVOHRAD, a region that includes parts of southern Slovakia and northern Hungary, serves as proof that when it comes to regional development, national borders do not have to stand in the way. Although Novohrad was one of the most advanced regions in Slovakia during the early 20th century, the last 100 years have not been kind and the region now struggles with the same problems that almost all central and eastern Slovak regions do: low incomes, high unemployment and the exodus of its young to the country's more affluent western regions and beyond.

Local authorities have established an association based on cross-border co-operation to try to help the region return to its former prosperity. Representatives of the geographic region historically known as Novohrad -which includes the southern part of the current-day Banská Bystrica Region, in particular the towns of Lučenec, Poltár and Veľký Krtíš, on the Slovak side and Nógrád county on the Hungarian side -signed a treaty establishing the Neogradiensis Euroregion in Lučenec on March 25, 2000.

"Our motivation was to increase cross-border co-operation," Milan Haluška, the project manager of the Neogradiensis Euroregion, told The Slovak Spectator.

Haluška said that regions near national borders are often marginalised, which causes them to be considered risky in terms of regional development. The EU's structural policy takes this phenomenon into consideration and supports these border regions, Haluška said.

"After entering the EU and the Schengen zone, border regions are given new opportunities. This is why we needed an organisation to cover our region," Haluška said when explaining why the association was established. Association members include municipalities and local governments, as well as civic associations.

Želmíra Kolimárová, head of the Department of Regional Development and Business Activities at the Municipal Office in Lučenec, mentioned the co-operation of towns, villages, associations and other institutions on both sides of the border as the main advantage of Neogradiensis Euroregion membership. According to Kolimárová, the co-operation is especially helpful when applying for financial support for various projects in Slovakia, as well as for cross-border activities with Hungary.

"These activities are focused on the development of the region and include preparing strategic documents, marketing plans and long-term planning documents, both for investors and in support of tourism," Kolimárová told The Slovak Spectator.

The projects are supported by several national and European funds. The association has also received grants from the European accession fund PHARE and is considering applying for other EU funds such as Interreg.

Some projects are also covered by the national government. For example, the programme to create favourable business conditions in Veľký Krtíš, managed by the Neogradiensis Euroregion and the Banská Bystrica Region, was financed by the state budget and the Ministry of Construction and Regional Development. The project supports entrepreneurs in Veľký Krtíš and helps develop the infrastructure for businesses in the region.

Both the Slovak and Hungarian sides have their own strategic documents and development programmes attached to the association, which, according to Haluška, has already completed a number of projects.

"The projects were more or less of a non-investment character, mostly focused on training programmes, marketing plans and long-term planning documents," Haluška said.

"The projects serve as a foundation for the investors who will create new jobs here," Haluška told The Slovak Spectator. The development of tourism, particularly the marking of cycle routes and publication of promotional materials, could make the region more attractive for young people, Haluška said.

Activities outside of the business sector could also promote cultural exchange. One of the projects, financed by SPERA and the state budget, was designed to preserve and exhibit the cultural and natural heritage of the Novohrad region. The association, along with architecture students from Slovakia and Hungary, have combed the region for cultural and historical sites that could be used for tourism.

The town of Fiľakovo hosted a conference called "The Common Preservation and Presentation of the Cultural and Natural Wealth" in October 2006 and, thanks to this project and Interreg funds, the region will be able to finance the preservation of castles, museums, sacred buildings and more.

The cooperation will make it easier for both countries to enter the Schengen zone since they will already have good travel and communication connections, Haluška said.

In spite of the stereotype of bad blood between Slovaks and Hungarians, Haluška insisted that there are none of these problems in the Nohovohrad region. No matter what their nationality is, people are an important resource for the region and all resources need to be "mobilised" to move the region forward, Haluška said.

"The sense of Novohrad identity and the local patriotism encouraged by the association grows out of what we have in common and knocks down prejudice and barriers," Haluška told The Slovak Spectator.

Sources: Statistics Bureau of the Slovak Republic, portal.statistics.sk, and the National Bank of Slovakia, www.nbs.sk. All figures current as of December 31, 2006, except for * Dec. 31, 2004. All euro conversions are based on current exchange rates.