AFTER decades of decay and vandalism, the 300-year-old Calvary in Banská Bystrica is set to be completely restored this year.
The Catholic diocese of Banská Bystrica will finance and oversee the restoration. The Church has already started building a monastery for six Carmelite monks near Calvary. 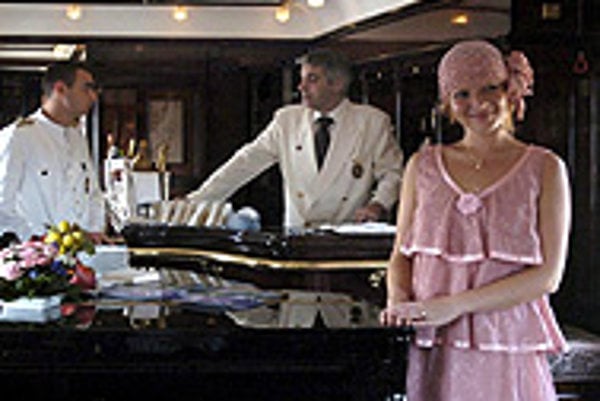 AFTER decades of decay and vandalism, the 300-year-old Calvary in Banská Bystrica is set to be completely restored this year.

The Catholic diocese of Banská Bystrica will finance and oversee the restoration. The Church has already started building a monastery for six Carmelite monks near Calvary.

The work will restore Calvary and the 270-year-old linden and chestnut alley that lines the Stations of the Cross at the foot of the Urpín hill. Renovations are expected to be completed within one year, said Bishop Rudolf Baláž of the Banská Bystrica diocese.

"We have considered its reconstruction for a long time, but we have been looking for a systemic solution, so that it does not end up like the one in Banská Štiavnica, destroyed in a couple of years," Baláž said.

The chapels of the Stations of the Cross, as well as the Church of the Calvary at the top, will be lit at night and monitored by cameras.

The project is expected to cost about Sk35 million (€1.05 million), with Sk13 million (€389,628) of that going towards the new monastery. The Banská Bystrica diocese will finance everything from its own resources, collected from the sales of unused grounds and real estate.

Baláž said Calvary used to be a popular site for spiritual and mental relaxation, not only for Catholics, but for people of all faiths. It is a powerful symbol because it brought the people of Banská Bystrica together after the plague epidemic, he said.

"Calvary is the icon of this town," Baláž said.

The first chapels of the Banská Bystrica Calvary were built at Urpín in the second half of the 17th century, when the Jesuits came to town. The Calvary in Banská Bystrica differs from others because the Jesuits had just eight Stations of the Cross, unlike the Franciscans, who had 14.

As late as the 1950s, Calvary was a favourite place for Sunday walks, but over time its condition deteriorated. In 2005, with Sk200,000 (€5,995) from the Culture Ministry through its "Let Us Renovate our House" subsidy program, the first five chapels were restored.

Paying for the reconstruction will serve as the diocese's contribution to Banská Bystrica's campaign to become the European Capital of Culture in 2013, Baláž said.

JUST in time for the summer holidays, the Cykloklub Poľana group from Detva has renewed the signs on 400 kilometres of cycling routes in the area.

"The routes were renewed in a programme aimed at permanently sustaining the routes for ecological transport and tourism," Ľupták said. "The programme looks for a way to ensure the permanent quality of marked cycling routes."

Ľupták said the project aims to get students and pupils involved in systematically checking the route markings. By using a special web portal, they can report the state of the route marking. If it has been damaged, a "marker" will then repair the marking.

Eight schools from the Poľana area have joined the project. In total, there are 51 volunteers, including eight teachers. The most active groups, according to Ľupták, are from the Strelníky school and the Co-ed Secondary School in Detva.

Support for restoring the signs with maps mostly came from the local governments of the community of Očová and the town of Hriňová.

Cykloklub Poľana got financial support for the project from a foundation in Banská Bystrica.

"This project is also applicable to other marked routes - for hikers, ski-touring or horse riding," Ľupták said.

THE VILLAGE of Ratkovské Bystré, in Revúca District, is pinning its tourism hopes on a rare 18th-century organ.

"The organ with two-and-a-half octaves was constructed in 1797 by Master František Eduard Petznik," village Mayor Pavol Bodnár said. "He allegedly built one similar organ, which is said to be placed in a church in Western Europe."

The organ is contained in the village's Baroque-Classical church. Experts consider the instrument to be exceptionally well mastered and unusual. It is a protected cultural heritage item.

Apart from the church and its organ, the tiny village under the Krížna Poľana mountain will also offer tourists interesting walks through its scenic countryside.

"We plan to build cycle routes and an educational path," Bodnár said.

They also intend to further develop one of the region's traditions - shepherding.

The economy of Ratkovské Bystré, with a population of 389, had its own production plant, where about 20 women worked for the Ozeta (Tornaľa) company sewing menswear. The plant was shut down in the 1990s due to internal problems.

The municipal office expects to soon move its operations into the deserted plant.

Although Ratkovské Bystré currently lacks a sewage system, it expects to build one with the help of the regional government through a cross-border co-operation project, which includes 19 communities from Slovakia and Hungary.

BROTHER Industries Slovakia officially opened its plant for producing new and recycled toners cartridges for laser devices on the premises of the former Krupina dairy on July 3.

Production had already started in April, with one assembly line and 20 employees.

At present, 40 people are working on two production lines, and the company hopes to increase that to 100 employees and six lines by the end of the year, general manager Frank Pipkin said.

Thirty percent of production currently consists of new cartridges, with 70 percent being recycled ones.

The plan of the founding Brother Group is to make the Krupina plant the largest recycling centre in Europe.

Pipkin said a big part of the Krupina space remains unused, and could be used to expand in the future. That will depend on the success of the current investment, and on the market situation.

The first Brother Group recycling centre opened in the town of Wraxham in Great Britain in 2004. Due to an expected growing volume of used toner cartridges and anticipated growth for the company, the company decided to build a similar plant in Central Europe. Several towns were considered, but Krupina won the final competition against a Polish community.

FORTY-FIVE villages from the Banská Bystrica Region got almost Sk186.8 million for their renovation and development from the Basic Infrastructure part of the region's Operational Plan.

The projects should be completed by the end of 2008.

The 45 villages were chosen from a total of 167 applicants, the Novohradské Noviny local newspaper reported.

On the other hand, applicants from the Poltár District got no funding at all, and those from Banská Štiavnica and Lučenec Districts only got about Sk6.3 million (€188,840) each.

The most financially demanding projects are in the villages of Očová in Zvolen District and Mokrá Lúka in Revúca District. In the former, a contribution of Sk26.3 million (€788,380) will pay for the reconstruction and building of workshops in the Yard of Crafts, which is expected to be completed by 2008. The project aims to improve the local infrastructure and support local entrepreneurs and rural tourism, which will create new jobs.

In Mokrá Lúka, the local government got Sk26.2 million (€785,330) to improve infrastructure, which will improve the village's competitiveness, support rural enterprises and provide basic services to rural inhabitants and visitors.

The lowest grant went to the village of Vígľaš in the Detva District, which received Sk4.4 million (€131,910) to reconstruct local roads and build pathways.