A PEDESTRIAN bridge linking Slovakia, Poland and the Czech Republic has opened to boost cross-border links and draw tourists.
"Our aim is to allow people to mix cultures and get to know each other," said Mayor Pavol Gomola of Čierne, the village where the Slovak part of the bridge is located. 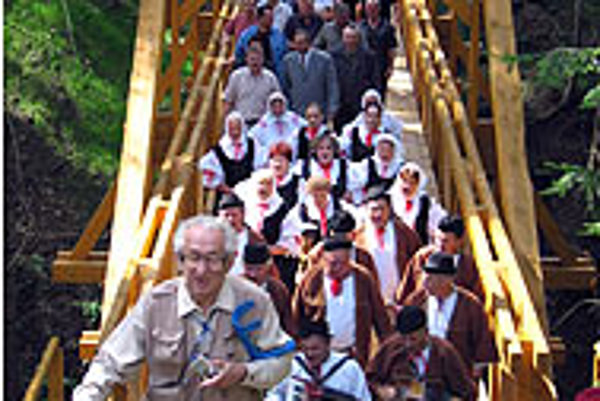 "Our aim is to allow people to mix cultures and get to know each other," said Mayor Pavol Gomola of Čierne, the village where the Slovak part of the bridge is located. "The bridge will facilitate cross-border co-operation and business, but also, we hope, because of its location between the three countries, become a tourist attraction."

The 18-metre bridge was officially opened on July 14 at Trojmedzie, on the Slovak-Czech-Polish border, by representatives of Čierne, the Czech village of Hrčava and the Polish village of Istebna.

The chairman of the Villages' Association, Petr Sagitarius, also noted the unique character of Trojmedzie.

"I see this day as the beginning of greater projects, not just for Slovaks, Poles, and Czechs, but also for foreign tourists," he said.

According to Gomola, the next step will be to build roads and bike paths that lead to Trojmedzie.

"In 1995, granite monoliths, called beskydy, were placed at Trojmedzie by a helicopter," he said. "At that time we realised that the border had a symbolic value, a place for future generations to build mutual respect, cooperation and understanding."

Sagitarius believes the next step is to spread the word about the bridge.

"We cannot expect everyone to find us here," he said. "We must publicise the bridge so the tourists will find us."

Construction of the bridge, which spans a gorge at the Slovakia-Poland border, started in November 2006. Sixty-five percent of the financing came from Poland; the other 35 percent from Slovakia. The project also drew support from the EU's Interreg program.

Unemployment down in the Žilina Region

UNEMPLOYMENT in the Žilina Region has dropped nearly two percent since the beginning of the year.

Unemployment fell to 5.7 percent at the end of April.

Automobile, engineering and chemical companies contributed the most to the improved figures.

The region's largest employer is Kia Motors Slovakia in Teplička nad Váhom, which now has a total of about 2,300 employees over two shifts. Kia suppliers located in Turiec and Kysuce also contribute to the rosy employment outlook.

The wood processing industry also helped with the upturn. Formerly state-owned plants in Liptov and Kysuce have been purchased and modernised by foreign companies, adding more workers.

New jobs were also created through projects supported by Žilina University, the Slovak Centre for Productivity and the Institute of Competitiveness and Innovation. These organisations are all located in Žilina and support the development of small and medium-sized enterprises.

WHAT stinks in Ružomberok? Citizens say it is a stench coming from the local brickworks.

Residents claim the odour from the Wienerberger Slovenské Tehelne brickworks has been spreading over the town for almost a year.

"The smell annoys us," said petition committee member Ľubomír Schmida. "Initially, people thought the smell came from PET plastic bottles or other garbage materials, but finally we came to the conclusion that the smell was caused by burning cellulose, which is used for brick production."

Representatives of the brick factory have promised to make an improvement and the Ružomberok town hall is promising to keep tabs on the situation. If there is no improvement, town representatives say they will move to limit the brickworks' production.

After negotiations at the town hall, representatives of the brickworks pledged to rectify the situation.

"The smell is caused by organic materials which are present in the products of combustion," said company representative Miloš Klein. "We agreed to cut the amount of organic materials that are added to our products, and that should reduce the smell."

He added that the company was preparing an investment worth dozens of millions of crowns. He said measures aimed at reducing the smell could increase the production costs.

CONSTRUCTION has started on an Aupark shopping centre in heart of downtown Žilina - and not everyone is happy about it.

Many in Žilina, including owners of nearby lots and buildings, are protesting the construction of the mall by the HB Reavis Group in the downtown Štúrovo Square.

The protest will not interfere with the construction, a representative of the HB Reavis Group said.

"We will build Auparks in five cities in Slovakia and all of them will be in the centres," explained Reavis representative Miroslav Sedlák. "The designs are based on a standard plan, as they are in other European countries."

Project manager Pavel Klč was disturbed by the negative reaction in Žilina.

"Up to now we have not had any problems of this sort," he said. "It is true that no other project of ours is in such an advanced stage as the one in Žilina. But we think that the trouble in Žilina is caused by political considerations. That is why it has raised such emotions."

The city government also has reservations about the traffic problems likely to arise during construction. But Zdenko Kučera, a representative of the Aupark company, believes those problems can be solved by a traffic system that uses traffic volume and pedestrian buttons to control crossing lights.

HB Reavis Group, a Bratislava development company, is planning to build five other Aupark malls in Slovakia by 2012. Along with Žilina, the other locations are Košice, Trenčín, Ružomberok and Piešťany.