Southern movement not thriving near Moča

Several hours before arriving in the village of Moča, which hosted a founding meeting of the Southern Council pro-autonomy movement the previous weekend, I call local Mayor Alexander Asbóth.
"I am sorry, I cannot meet you because of the funeral of Zsiga báscsi (Uncle Zsiga)," he says.
But over the phone, he shares his thoughts on the meeting. 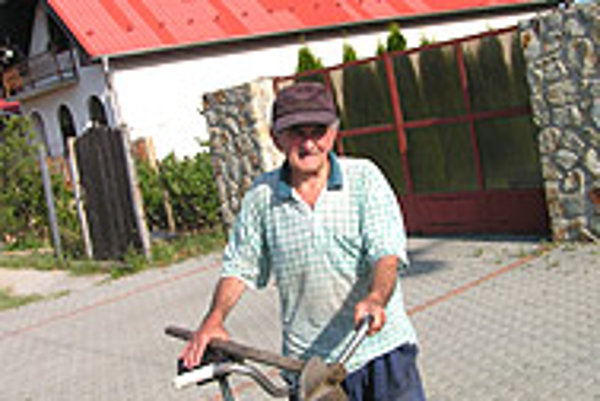 Font size:A-|A+
Several hours before arriving in the village of Moča, which hosted a founding meeting of the Southern Council pro-autonomy movement the previous weekend, I call local Mayor Alexander Asbóth.

"I am sorry, I cannot meet you because of the funeral of Zsiga báscsi (Uncle Zsiga)," he says.

But over the phone, he shares his thoughts on the meeting.

"I did not know about this meeting, no one ever notified us about it, and I take it as a provocation," he said. "We, the people of Moča, have nothing to do with this activity and me personally, I do not agree with it. I see no reason to speak about autonomy when we joined the European Union."

I try to call the mayor of the neighbouring village of Radvaň nad Dunajom, Ľubomír Púchovský. An ethnic Slovak, Púchovský is mayor of a community that is more than 80 percent Hungarian.

Unfortunately, he is not in the village.

In Žitava, which belongs to the community of Radvaň nad Dunajom, I meet András Vörös, 78, returning from his vineyard by bicycle. I ask whether he likes living in Slovakia.

"I do not speak Slovak very well," he answers in Hungarian, "and I do not need it. But I am happy to be here. I grew up here, my ancestors lived here for centuries. The borders changed, but we have lived here since forever.

"The important thing is that a person has good character, and not their nationality."

"We were treated better then, us Hungarians," he says. "All official documents were written in both languages. Now they send me documents in Slovak and I do not understand them."

I ask him whether he approves the fight for autonomy.

As a small boy, Vörös says, he learned a little poem about Slovakia. He begins to recite it: "Szép Slovensko az én hazám, itten nevelt apám, anyám." It means, "Beautiful Slovakia is my homeland. Here, my father grew, and also my mother."

We are standing next to the monument commemorating the Žitava Peace, signed in 1606 at this site by the signatories of the Habsburg monarchs and the Ottoman Empire.

"As early as those days, my family used to live here," Vörös adds. "The borders kept changing, but we lived here."

Bystrička, another part of Radvaň, only has Slovak residents. The village only has about 10 houses, most of them already empty.

"The residents of Bystrička died out, or moved," Mária Dunayová explains.

We sit in her orderly garden, drinking coffee. Bystrička is situated on a slight slope, from which you cannot see the Danube River. But you can see a slightly undulating landscape of hills that lies on the other bank of the Danube - Hungarian territory.

"This region is the most beautiful region in the whole world," Dunayová says. "My grandparents moved here from Brezno, and we come here for weekends and vacations. We live in Nové Zámky.

"I had no conflicts here because of being Slovak," she continues. "On the contrary - we help each other. When we were buried in snow in Bystrička - we can get half a metre of snow here in winter - and I had to drive to Nové Zámky, the people of Radvaň towed my car with a tractor as far as the main road, which was already cleared."

Mail doesn't come to Bystrička - all the mail is handled in Radvaň. There is no gas here, nor a water main.

"We draw water from a well," Dunayová says.

But she doesn't think the reason for the lack of utilities was the different nationalities in the village.

"Radvaň simply does not have money to bring in gas," she says. "But I am sorry that they did not find the money to take children from here to Virt (a nearby village), where a bus took them to a Slovak school."

"She had to attend the Hungarian kindergarten, but it was not a problem," Dunayová says. "The only difference was that she learned several Hungarian words."

"But after one liter of wine in the pub in Radvaň, he becomes a Hungarian separatist. He wants Hungarian autonomy," she laughs.

Immediately, Dunayová admits she is afraid of autonomy.

"What will they want, if there is autonomy here? Will they kick me out?" she asks. "But this is my house, my garden, I do not want to leave here. My grandparents used to live here."

She refuses to speak Hungarian.

"Slovak is the official state language, we are in Slovakia, so let them speak in Slovak with me," she says.

Asked whether she can make herself understood, she answers, "Of course. No problem.

"The only problem I had, and still do have, is different," she continues. "If I come with our Nové Zámky license plates to Central Slovakia or the Tatras, we are called names. They say we are stupid Hungarians."

We touch on the issue of SMK politicians.

"(Former SMK chairman) Béla Bugár has just one fault - he is not Slovak," she says with a laugh.

Klára Becková lives in Moča. Before she retired, she worked as a kindergarten headmaster.

"We just want to be equal citizens," she says. "I do not have any problem speaking in Slovak, I can communicate everywhere. But I am sorry that in Dunajská Streda, which has a majority of Hungarian inhabitants, I ask for a ticket at the railway station in Hungarian and they tell me in Slovak they do not understand.

"Even according to the language law, for public employees and officials in regions with 20 percent minority inhabitants, the Hungarian language should be used. How can they manage to serve, for example, older people who do not speak Slovak at all?"

"People travel to Hungary to work there," she says. "Dozens of company buses drive once a week from Komárno through the nearby villages, collecting people and driving them to Hungary."

One of Becková's daughters, an entrepreneur named Klára Baginová, married a Slovak.

"I respect everyone's national pride," Becková said. "That is why I want others to respect my pride in my Hungarian nationality."

Political analyst Miroslav Kusý is convinced that the idea of autonomy is being revived because Ján Slota's SNS party became part of the ruling coalition.

"It was clear from the beginning that it would lead to radicalisation of the Hungarian minority, as the fear of nationalism would become stronger. Fear of what Slota can do," he said. "After all, Slota has not stopped making statements and proclamations, aggravating the situation. This is a pressure that causes a counter-pressure."

In spite of all this, and in spite of all problems in the Slovak South, Kusý thinks the autonomy debate is currently unnecessary.

"The idea of autonomy loses its justifiability gradually, as European integration grows stronger and deeper," he said. "The state itself gives up a whole set of authorities to European hands. So in this view, any autonomy proceedings are senseless."