Insita serves as a forum for outsider and self-taught art

THE SLOVAK National Gallery (SNG) is hosting the eighth triennial Insita 2007, an exhibition of works by untrained artists known as Self-Taught Art, Naive Art, Art Brut and Outsider Art. Until the end of September, visitors can see an international jury's selection of about 300 pieces by 90 artists from 18 countries. 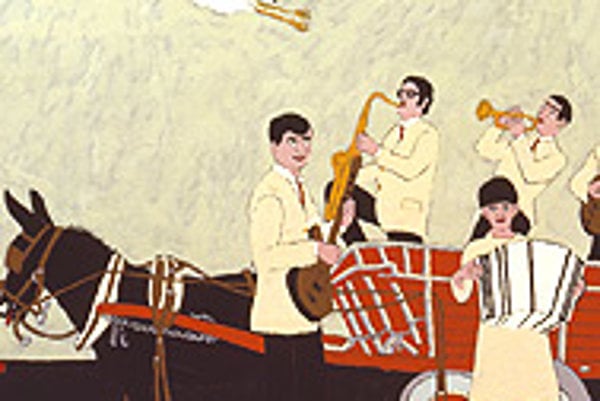 Font size:A-|A+
THE SLOVAK National Gallery (SNG) is hosting the eighth triennial Insita 2007, an exhibition of works by untrained artists known as Self-Taught Art, Naive Art, Art Brut and Outsider Art. Until the end of September, visitors can see an international jury's selection of about 300 pieces by 90 artists from 18 countries.

Defining the style of self-taught or naive art is difficult because it breaks the standard rules of perspective, making some of the pieces look as though they were drawn by children. None of the exhibited artists studied at art schools, but all had a deep sense for incorporating their feelings and imagination into their work.

"There are two ways of approaching art," Cardinal said. "One is to look at the work and the other is to think and talk about it." By definition, there is no official art education behind the works of unschooled artists, but "these people have an idea in their head or a vision in their mind and want to do something spontaneously. We are very attentive to this desire for expression."

"Professional or trained artists are very skilled, but often have nothing to say," said Laurent Danchin, a jury member from France. "[Self-taught artists] have a very strong message for the world that's more important than themselves."

The largest portion is being presented at the Esterházy Palace under the title Magic Architecture. It includes the works of 20 leading European untrained artists, whose pieces are imaginative depictions of make-believe and utopian countries, castles, palaces, churches, and towns.

Among the featured artists are some of the most famous and important representatives of Art Brut in the world, such as Swiss artist Adolf Wölfli, who combines detailed pencil drawings with text, Dutch artist Herman Bossert, who exhibits Gothic-esque architecture, and French artist Marcel Storr, who draws sky-scraping cathedrals. Emanuel Navratil's Town into the Town painting invites people to take a long look at it.

Russian artist Vasiliy Romanenkov, who won the Grand Prix Insita 2004 with his multi-figure geometric compositions, is also exhibiting his works in the Esterházy Palace.

The palace is also presenting pieces by the 40 artists who competed for this year's Grand Prix, including the winner, Polish artist Justyna Matysiak.

The Crucifixion of the Soul, a masterful mosaic by English artist and psychic medium Madge Gill, is also on display. The 10-metre-long and 1.5-metre-wide ink drawing on calico fabric is the prized possession of The Newham Collection in London, which lacks the space to put it on permanent display.

Insita is also presenting a collection of Romanian naive art, as well as some by French artist Germain Tessier. The section Rising from the Depth or Visionaries of Czechoslovak Art Brut presents Czech and Slovak artists Anna Zemánková, Cecilie Marková, and Eva Droppová.

Apart from the main SNG venue, the exhibition takes place in the Slovak National Museum - The Exhibition Pavilion Podhradie and in the Schaubmar Mill in Pezinok, which was turned into the Naive Art Gallery.

What: Insita 2007
When: Tue-Sun 11:00-18:00 until September 30
Where: SNG - The Esterházy Palace, Námestie Ľ Štúra 4; the Slovak National Museum - The Exhibition Pavilion Podhradie, Žižkova 16, both in Bratislava; and the Naive Art Gallery, Cajlanská 255, Pezinok-Cajla
Tickets: Sk80 (The Esterházy Palace)