THE NEWSROOM of the public broadcaster Slovak Television (STV) is in crisis.
About six months after Radim Hreha was elected general manager of STV, and Ján Šmihula was appointed editor-in-chief of the news desk, three journalists are leaving: Jaroslav Barborák, Martina Ruttkayová and Mária Ölvédyová. They follow anchor Nora Gubková and editor Michal Petruška, who left in May. 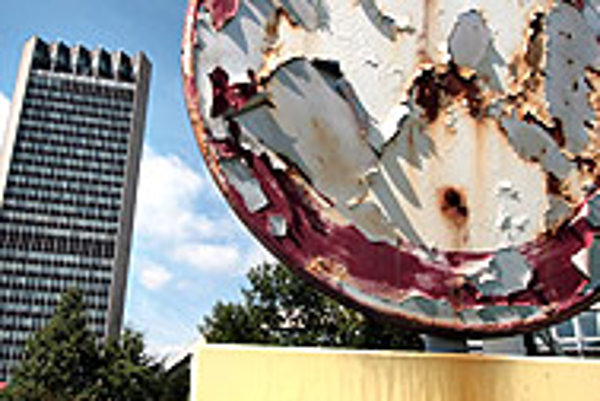 Font size:A-|A+
THE NEWSROOM of the public broadcaster Slovak Television (STV) is in crisis.

About six months after Radim Hreha was elected general manager of STV, and Ján Šmihula was appointed editor-in-chief of the news desk, three journalists are leaving: Jaroslav Barborák, Martina Ruttkayová and Mária Ölvédyová. They follow anchor Nora Gubková and editor Michal Petruška, who left in May.

Eugen Korda, the editor and anchor of the investigative program Reportéri, and Štefan Hríb, the anchor of discussion program Pod Lampou (Under the Lamp), who were the first to report that the STV leadership was under political pressure, were fired at the beginning of the year.

Ruttkayová said she left STV because of the negative atmosphere there. She said it was hard for her to work under the current management because her opinions were not identical with those of the management, and that she felt staying there any longer would harm her journalistic credibility.

"I never said there was censorship in the STV," Ruttkayová told The Slovak Spectator. "I cannot speak about censorship. I do not know what lies behind it, when the boss comes and tells me how to cover an individual story.

The journalists cited several occasions when there was interference in their journalistic work.

On July 28, the Sme daily reported that the people in charge of the newscast stopped a report about the nephew of Justice Minister Štefan Harabin becoming head of the local land office in Kežmarok.

Another time, the head of the broadcast shift refused to broadcast a clip consisting of politicians' reactions to a statement from Ján Slota, chair of the ruling coalition Slovak National Party (SNS), about homosexuals.

Asked by a Sme reporter whether the SNS would support a possible change of legislation about same-sex partnerships, Slota answered: "In no way do I think we should, in our coalition, consider talking about the perversity of homosexuality." Next, he called the journalist "dirt," Sme reported on June 13.

Barborák told The Slovak Spectator that when he was reporting on a poll from the Focus agency, the head of the domestic news section, Zuzana Štukovská, forced him to cut out one of the poll's findings - that most trade union supporters are Smer voters, mainly people from the country with an elementary-level education.

"The editor, Štukovská, told me to omit the statement about Smer's voters, as not all Smer voters are uneducated and from the country," he said. "I told her I had not invented this, but it was the result of an opinion poll. This was not my opinion. She cut it anyway."

According to Ruttkayová, since the installment of Šmihula as editor-in-chief, reporters also followed many official foreign trips by top officials.

"I had to accompany the Slovak president to Hungary, to a celebration of the anniversary of one community, where he laid wreaths," she said.

"Beforehand, Štukovská told me to file a nice, non-controversial report. So she deprived me of a choice, and maybe of the option of compiling the material in my own way."

Asked whether she could have refused in advance to file a "non-controversial" report, Ruttkayová told The Slovak Spectator that in the atmosphere of the newsroom, she did not find such a refusal realistic.

STV denies that any of those cases involved censorship.

"None of the aforementioned cases involve provable censorship or political pressure, but rather flaws in internal communication within the STV news team," reads an official statement, provided to the Slovak media by STV spokesperson Želmíra Habánová.

The response to Slota's comments about homosexuals was not aired because the main news program, STV News, did not report on the original quote, according to the STV statement.

Hreha was quoted in the Hospodárske Noviny daily on July 31 saying that he consulted with leading politicians on the issues related to the news broadcast.

"Of course the politicians call me, and from time to time I call them as well," he said. "STV is a public institution, created by law and financed by another law - and the laws are made by politicians.

"The issue of the newscast cannot be avoided sometimes. In those cases, I defend STV's position, though. I have not allowed and I will not allow this to exert influence on the work of the news team or the STV broadcast."

Because of the recent tensions at STV, and the quality of its news broadcasts, STV Council vice-chairman Miroslav Kollár is starting to question whether Slovakia needs a public TV channel at all.

"I no longer think that any top political or economic team would make the space for public media, which they need, and that it would let them work," he said. "That is also caused by various economic interests.

"Six months after the new management arrived, the newscast of the STV is becoming frivolous. It has no concept and it is losing its audience."

He thinks it's logical to expect journalists to leave.

"I simply have the impression that this is the last chance for people who do not make sycophantic, empty and useless news to leave unscathed," he said.

"The news strategy presented in May by editor-in-chief Ján Šmihula looked like an essay by a pupil from the ninth grade," he told The Slovak Spectator. "In his agenda, he veers from what I understand to be objectivity and fair-mindedness."

One part of the agenda reads, "We focus on so-called citizen's journalism and topical investigative journalism. In the background of every issue, there must be an answer to the question - what will the citizen get from the issue? What are the negative implications, positive ones, risks - simply, why should he or she be interested in it?"

Kollár and Malec also have serious concerns about a comment Šmihula made in Sme on July 28. Asked what he considered the crucial issue for the newscast, he answered: "Safety in railway transport. During train trips, the doors of the cars often open, killing passengers."

"It is unbelievable that for the editor-in-chief of the broadcaster, the crucial issue is the safety of railway doors," Kollár said.

The STV Council cannot recall or nominate members of the STV management, apart from the general manager.

"We can only announce violations of the Law on STV," Malec said. "In my opinion, it would be ideal if the general manager offered his own news strategy, and I think Šmihula should resign - if for no other reason than his incompetent interview in the Sme daily.

"This is proof of Ján Šmihula's strong lack of professionalism."

STV Council chairman Bohumír Bobocký defended Šmihula. He told The Slovak Spectator that the news agenda was just a working version, and that the editor-in-chief promised as early as May to prepare a new draft.

Bobocký said he does not know about any political pressures.

"I can neither confirm nor deny it, as in contrast to the previous period (the case of Ivan Brada, a reporter who left STV in the past), none of the journalists came to the Council with a complaint about the violation of the Charter of Newscast and Investigative Journalism," he said.

Šmihula did not wish to comment on the situation.

"I cannot speak now, I cannot. Ask the spokesperson," he told the Pravda daily in a July 31 story. He did not comment for The Slovak Spectator, either.

Kollár asked for a Council meeting to address the alarming situation at the broadcaster. But he does not think the STV Council will solve anything.

"There is no space in the Council for solving problems," he said.

Claims that STV was under political pressure immediately after the last election came to light in January.

HZDS vice-chair Milan Urbáni told Sme "it had been agreed upon that the political parties within the ruling coalition will have an impact on some activities in the STV and will take over responsibility.

"We protested because we had clearly agreed that when the new STV director is elected, we would sit down and come up with names," Urbáni told Sme. "We assess them and we choose someone. Right now I do not have anyone in mind who I would want to have on the news desk, but for example the SNS could have proposed someone."