PARTIZÁNSKE, the city once called Baťovany, was one of the industrial centres of shoe mogul Tomáš Baťa. But today there are only a few feeble reminders in the Trenčín region - such as the big shoe made of flowers, the symbol of Partizánske - that Slovakia was once one of the biggest players in the European shoemaking industry. 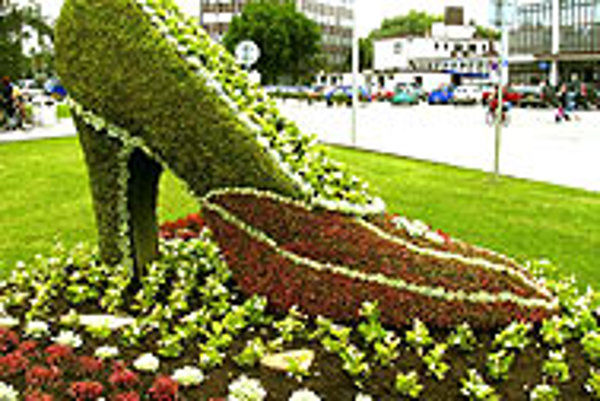 Font size:A-|A+
PARTIZÁNSKE, the city once called Baťovany, was one of the industrial centres of shoe mogul Tomáš Baťa. But today there are only a few feeble reminders in the Trenčín region - such as the big shoe made of flowers, the symbol of Partizánske - that Slovakia was once one of the biggest players in the European shoemaking industry.

The tanning industry basically no longer exists in Slovakia and the shoemaking industry has been struggling for a while, František Krähenbiel of the Rialto shoemaking company told The Slovak Spectator. The struggle is likely to continue, he said - shoemakers have been wrestling with several problems, some of which appear impossible to solve.

Partizánske lost its clout in the shoemaking world after the collapse of the centralised economy in Slovakia.

"Before 1989, truly everything in Partizánske and its surroundings depended on the shoemaking industry," Krähenbiel said. "Local companies usually provided all the supporting products and services for the main production, and that gave a boost to the machinery, rubber and tanning industries."

Maintenance and supplies were also well developed, according to Krähenbiel. The shoe warehouse handled marketing and sales, while the Exica storehouse ran the exports. Each company had its own retail outlets as well, he added.

"In the former ZDA (Závody 29 Augusta, the name given to the Baťa company after the communists took power) almost 30 million pairs of shoes were produced and about 10,000 people worked for the company," Krähenbiel told The Slovak Spectator. "Today only a fraction of that is left."

Several companies emerged out of the failed privatisation of ZDA. The smaller ones remained in the hands of Slovak owners while the bigger companies now have foreign capital, added Krähenbiel, whose company has Italian ownership.

Only the Vulkan company, a former rubber subsidiary of ZDA Partizánske, has a Slovak majority owner, he said.

Foreign ownership helps companies invest in new production here and develop export networks, he added. Only long-term cooperation and good business ties can help companies win bigger and more regular contracts, and for a relatively unknown producer it is hard to access these contracts without foreign support, he added.

"It is actually the only solution, especially for brand-name shoes, which are more expensive because our market is so small," Krähenbiel said.

For example, Rialto's production focuses on exports to western European countries, the US, Canada and Japan.

However, a dominant focus on exports caused some problems last year due to fluctuations in the SKK/EUR exchange rate. To compensate for the currency impacts, producers inflated prices by 10 percent, which is quite unusual within business relationships, Krähenbiel said.

"Shoemaking has never been a lucrative and profitable enter-prise," Krähenbiel said.

Shoemakers have always tried to achieve the lowest costs possible, while profits are mostly concentrated at sales and distribution companies. Comp-etition from Asian producers, who have markedly lower labour costs, has made these aspects even more dominant, he added.

Salaries and payroll taxes make up a big portion of the price of shoes, which according to Krähenbiel is characteristic of this kind of industry.

"On one hand, the growing production costs are rather high because of the continuing rise of prices and the pressure on wage growth; and final prices then contribute to the strengthening of the currency on the other hand," Krähenbiel said. "It all pushes the shoemaking industry into a very difficult situation."

However, the industry is able to create a lot of jobs for people. Rialto is the biggest employer in Partizánske district, according to statistics from the Partizánske municipal office.

The company currently has more than 1,700 employees. Rialto also relies on permanent contracts with local suppliers, who employ another 800 people in total.

"If Rialto collapsed, almost 2,500 jobs would be killed in Slovakia," Krähenbiel said.

Rialto copes with the shoe industry's instability by focusing on brand-name products that are demanding to produce and not likely to be manufactured in Asia, because it's hard to maintain quality standards and supply schedules there. The strategy seems to be working: the company has been producing their shoes for 15 years now.

"This is the second year in row that we had production growth of 15 to 25 percent over the previous year," Krähenbiel said.

The biggest problem for the shoe industry, however, is the lack of a qualified labour force.

"The salaries are not attractive for many people, even those who are currently unemployed," Krähenbiel told The Slovak Spectator. People who work in the clothing industry are still a source for shoemakers, but Krähenbiel said these sources will likely be exhausted soon.

Rialto recently built new facilities in Nitrianske Pravno and the company was able to recruit the number of employees it needed. However, the company must consider the problem of human resources when it plans another expansion.

The local authorities say they support education for young people in this industry, which is a part of the town's tradition. The city wanted to establish a college but they weren't successful, said Mária Jančová, the head of the Municipal Office in Partizánske.

Only the municipality itself has been willing to financially support a training institution, while entrepreneurs have not really been in favour of the idea, Jančová said. The mayor of Partizánske, together with the principal of the industrial secondary school, organised a meeting of the 20 most important entrepreneurs in the area to discuss the prospects of offering education within the industry.

"The aim was to define companies' needs in terms of education - specialised training of young people directly for the needs of the industry in our region" Jančová told The Slovak Spectator.

However, only three entrepreneurs showed any interest in this idea, she said.

"It's a pity that the shoemaking crafts are vanishing," Július Michník, the president of the Baťa School of Work (Baťova škola práce - BŠP) Alumni Association, told The Slovak Spectator.

Even though there are many factories in the Partizánske region - in almost every village - the training of apprentices has been declining, according to Michník.

"For sure, the competition from Asia is huge, but the quality of Asian shoes cannot be compared to the quality of shoes that used to be produced in Partizánske during the era of Baťa's enterprise," Michník said.

Today the alumni association has 393 members from all around Slovakia. The club was established in 1939 and functioned until 1949, when its activities were banned for political reasons.

The group was revived 15 years ago to include people who graduated from the BŠP, a school founded in 1925 by Tomáš Baťa, the founding father of the Baťa Shoe Company. Most graduates spent their whole working lives employed by the Baťa enterprise in Partizánske, renamed ZDA after the communists took power in Czechoslovakia.

Michník started attending BŠP when he was 15 years old, and from the very beginning he had to work eight hours a day and then go to school after his shift.

"Everybody had to learn to take care of themselves," Michník told The Slovak Spectator.

The school provided education not only for shoemaking apprentices, but also for economists and other professionals Baťa needed to run his business.

Whatever the specialisation was, each student had to be able to make a pair of shoes alone. They were paid a nice amount of money for their work, but in return they had to pay for school, accommodation and food.

Nothing was free, so the young people had to learn how to manage their money. Discipline was in always the priority.

"In Baťa's system, parents didn't have to support their teenage children financially - at school we earned our living, we prepared ourselves for our future career, we were even able to save some money and we learned all skills we needed for practical life," Michník said.

"No doubt the ways of production and sales that Baťa introduced in the shoemaking industry in the 1930s and 1940s were highly progressive for their time," Krähenbiel told The Slovak Spectator.

Baťa made production more effective, and that helped to cut the price of shoes, which helped spread the products and brand around the world.

However, the long years of balancing technologies and manufacturing between different producers, rising labour costs in developed countries, and competition forced Baťa to move production to countries with a cheaper labour force, raise prices and become a seller rather than a producer.

"The brand Baťa is no longer a synonym for inexpensive shoes," Krähenbiel said.

This was proved by Tomáš Baťa, Jr.'s attitude to negotiations in Slovakia and the Czech Republic after the revolution in 1989, Krähenbiel said: the shoemaker was only interested in sales activities and restitution of his former shops, and not in shoe production.

Tomáš Baťa was born to a shoemaker's family in Zlín in 1876. Since the day he was born it was clear that he would become a shoemaker and take over his father's business, because the craft was always passed on from one generation to another.

Baťa started his own business at the age of 18 and it grew into a respectable company. He focused on producing shoes for poorer people, and soon his inexpensive shoes made him a fortune.

Baťa emigrated to the US on his own and worked at a shoemaking factory, learning how the system worked. After he returned to Europe, he based his business strategy on self-sufficiency. He built not only shoemaking factories, but also machinery companies that provided his business with the machines to make shoes. He also owned factories that produced furniture for the company's offices and construction companies to build houses and offices.

Baťa kept faithful to his saying that wherever there was a police station, there should also be a Baťa shoe shop. He had around 340 retail shops in Slovakia alone.

Shoes produced in Slovakia were also exported all over the world, including to Africa and both Americas. In the 1920s, Czechoslovakia was the world's biggest exporter of shoes.

After the First World War, the USSR was the main purchaser for Baťa shoes. In Baťovany there was an independent company that produced shoes for the Soviet army.

Baťa had great plans. He built company cities for his employees with all the amenities they needed. He built a river canal that served for cargo transport, and a railroad.

One of his biggest endeavors was the construction of a motorway across Czechoslovakia from Aš (in the west of today's Czech Republic) to Užhorod (today in Ukraine). He also built an airport in Zlín, the centre of his production, in the eastern Czech Republic.

After his death in a plane accident in Zlín in 1932, the company was managed by his brother, Jan Antonín, and his son, Tomáš Baťa, Jr. After the Czech part of the republic was invaded by Germans at the beginning of the Second World War, Jan Antonín fled to Brazil and operated the business from there. Tomáš did the same in Canada, in the planned company city of Batawa. Those are the only places where Baťa factories are still in existence.

Tomáš Baťa, Jr. is 92 years old and he still lives in Canada.