LATER this month, Howie the Rookie by Irish playwright Mark O'Rowe returns to the Edinburgh Fringe Festival, where it won Best Production in 1999, but this time, it's in Slovak. 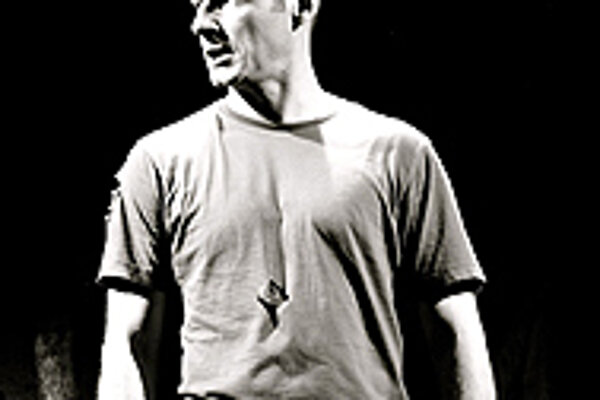 Font size:A-|A+
LATER this month, Howie the Rookie by Irish playwright Mark O'Rowe returns to the Edinburgh Fringe Festival, where it won Best Production in 1999, but this time, it's in Slovak.

Performing it is the Divadlo Kontra, an independent theatre group formed by UK-based Polish stage director Klaudyna Rozhin and Slovak actors Peter Čižmár and Miki Macala that's devoted to bringing contemporary drama by the young in-yer-face playwrights of Ireland and the UK to Slovakia.

"I acquired the rights to Howie the Rookie and translated the play into Polish, which opened at the Rozmaitości Theatre in Warsaw in 2002, and was fantastically received, just like the original production in the UK," Rozhin told The Slovak Spectator. "Somehow though, I didn't want to say goodbye to the play and felt that translating it wasn't enough. I wanted to direct it."

So Rozhin turned to Slovakia, where her father had directed Willy Russel's Blood Brothers at the Prešov Theatre in 1993.

"Slovak actors ... are the kindest, warmest and most welcoming people I've ever met in theatre," Rozhin said. "Plus their commitment, focus, openness and courage when it comes to a rehearsal process are unmatched. Last but not least, they have talent and modesty - a combination rarely found in actors!"

In 2004, Rozhin was invited to direct the first Slovak production of another contemporary Irish drama, Martin McDonagh's The Beauty Queen of Leenane, at the Spiš Theatre in the eastern Slovak town of Spišká Nová Ves.

And that's where she met actor Peter Čižmár.

"Peter and I got hooked on working together and on breaking new ground in our dramatic choices," she continued. "It was at this time that we did a first reading of Howie the Rookie, in a rough translation done from my Polish one, and decided we had to do it, come hell or high water."

But the path to getting it staged quickly turned rocky.

"The play was too bold, too coarse for the tastes of Spiš Theatre or any other 'regular' repertory theatre," Rozhin said. "In-yer-face theatre and the generation of young brutalists has yet to force the doors of Slovak theatres' resident dramaturgs, who don't hesitate before adding yet another production of a 100-year-old Slovak classic to the repertoire or commissioning another version of a local folk tale targeted at school children, but run away screaming when they hear of a play where characters swear! Theatre [in Slovakia] is still considered an institution meant to stand for beautiful language and moral values."

So that's when Divadlo Kontra (literally "The Opposition Theatre") was founded.

"We didn't get any financial help from anyone," Rozhin said, "but the Spiš Theatre did allow us to rehearse in their building. The actors worked 8 hours a day for 6 weeks without being paid a penny, but it never dampened their spirits or weakened their commitment. It was 'our baby' and we were giving it our all."

In fact, actor Peter Čižmár, who plays Howie, believed in the project so much, he quit his job as a member of the Spiš Theatre ensemble to devote all his time and energy to it.

But obstacles remained in the way, such as perfecting the translation from English into a text that had the same gritty urban feeling and powerful effect.

"The play is in a North Dublin dialect that I literally couldn't understand," Rozhin said. "They have their own words for everything, even a bed. And furthermore, neither Polish or Slovak has such a richness of slang [as English]. I wasn't necessary looking for words that were as coarse, just the kind of slang that young people use. But neither Peter or I spend time around that kind of slang, and it's not written down or compiled somewhere."

The lack of a diverse range of slang in Slovak could be because in Slovak, other markers, such as pronunciation and dialect, are used to show regional identification. And during communism, when it was unacceptable to imply class differences existed.

Therefore, Rozhin admits, the translation is still a work in progress.

"Whenever we learn something new, we discuss it to see if it would fit in the script better," she said.

This past January, the Divadlo Kontra's production of Howie the Rookie finally opened at the Spiš Theatre.

Audience and critics alike were enthusiastic, including Peter Scherhaufer of Týždeň magazine, who hailed Čižmár as "dynamic" and co-star Miki Macala's performance as "elusive" and "eccentric".

After the successful premiere, Howie the Rookie (now Howie a Rookie in Slovak), went on tour. Earlier this year, it took part in two of Slovakia's most important theatre festivals: the Dotyky a Spojenia (Contacts and Connections) Festival in Martin and the New Drama Festival in Bratislava, where it won the prestigious Prekvapenie Novej Drámy (Outstanding Newcomer) Award.

"It was an exceptional recognition for a small company in a country where an independent theatre venture is still a rarity," Rozhin said.

The Divadlo Kontra is now preparing for a performance at the Alma Tavern Pub in Bristol, England before heading to the Edinburgh Fringe Festival from August 20-25.

Shortly after, it returns to Slovakia for a tour of eastern Slovakia that will give it the chance to perform in villages with high unemployment, large Roma populations, and even in prisons.

"I think the people from those areas will respond with the right emotion," Rozhin said.

The tour of eastern Slovakia was made possible with financial support from the Irish Embassy in Bratislava.

"One of our main goals is to raise the profile of Ireland, and [Howie the Rookie] is representative of a new wave of Irish playwriting," Hilda Ó Riain, Deputy Head of Mission at the Irish Embassy, told The Slovak Spectator. "It relates experiences and emotions that aren't specifically Irish, but the style's definitely different."

But the section of society Divadlo Kontra most wants to appeal to is secondary school students, whom Rozhin believes have grown up with the consumerism of modern society and will later in life yearn for a knowledge of great art, which she calls "food for the soul".

Her plan seems to be working.

"We still get an occasional phone call from a teacher," Rozhin said, who might say 'It was very strong... the language, you know, but the kids loved it!"

For more information about Divadlo Kontra or future performances, contact Klaudyna Rozhin (in English) at klaudynka@rozhin.plus.com or