MORE than a week after fire completely destroyed a municipally-owned building in Kysucké Nové Mesto, leaving several dead and injured and dozens homeless, the question of how the fire started still remains unclear. 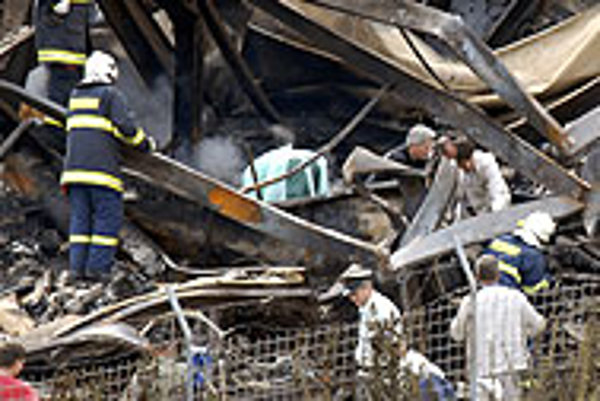 Font size:A-|A+
MORE than a week after fire completely destroyed a municipally-owned building in Kysucké Nové Mesto, leaving several dead and injured and dozens homeless, the question of how the fire started still remains unclear.

The fire started after midnight on August 3 and spread quickly through the two-storey building that housed low-income families. Two days after the fire was extinguished, police reported nine people were found dead, but only two female and two male bodies could be identified.

Two other people are still missing, but police reported there were no more bodies to be found at the fire scene.

Most of the boarding house residents were Roma. They believe the fire was started as an attack on them by racists.

"They threatened us, shouting under our windows that they will burn it all down here," Jozef Frátrik, a boarding house resident, told the Sme daily. He said they didn't see anyone, but they heard voices.

Police have dismissed claims that the fire was started as a racist attack. The spokeswoman of the regional police directorate in Žilina, Jana Balogová, told The Slovak Spectator that the cause is still under investigation, but evidence discovered so far shows that the fire was not started on purpose.

"The boarding house residents were not only Roma, but also white low-income families, and there is most likely only one Roma woman among the victims of the fire," Balogová said.

"Soon the police will have an expert's opinion about the cause of the fire at their disposal and then it shouldn't take long to determine how the fire was caused."

Police have been monitoring the activities of extremists in the Kysuce region who launched several racist attacks in 2006, and the number of attacks has decreased this year, Balogová said.

Experts say the fire started inside the building, in its lodging part.

Jan Hartel, the mayor of Kysucké Nové Mesto, told the Pravda daily that some of the residents could have had illegal and inexpert electricity connections after they were disconnected for not paying for the service.

"My guess is that it happened because of some inner electrical short-circuit," Hartel told Pravda.

He also dismissed the suggestion that the fire was set intentionally.

"The rest of them were waiting for the court to decide on further steps to be taken," Svrčková said.

The court's decision will also determine whether the non-payers will get some alternative accommodation if they have to move out. In this case, the law does not say it is necessary to provide them with substitute housing.

According to Svrčková, none of this matters any more.

"We helped everyone," she said.

According to police, the 64 residents who were evacuated lost all of their property. The municipality provided them with temporary accommodation in six flats and a former nursery, and gave them food and clothes, Pravda reported.

Viera Tomanová, the Minister of Labour, Social Affairs and the Family, promised to help the municipality build a new boarding house and pay Sk25,000 (€748) to the families of the victims to cover the funeral costs.

The fire might put an end to the era of colonies of squatters living in buildings made of easily flammable materials, Sme reported. Hartel told the daily that the new boarding house in Kysucké Nové Mesto would definitely be built of masonry to be more fire-resistant.

The boarding house will likely stand at the same place as the burnt one, since the municipality has no other appropriate lot for it, Sme reported.