THE SLOVAK Syndicate of Journalists has already requested a meeting with Prime Minister Robert Fico to discuss his recent critical statements about the operation of the media in Slovakia, but has received no answer yet. The Slovak Spectator talked to chairman of the syndicate Zuzana Krútka who shared her views on the new draft press code, the trend of Slovak media becoming tabloid and the impact of economic pressures on journalism. 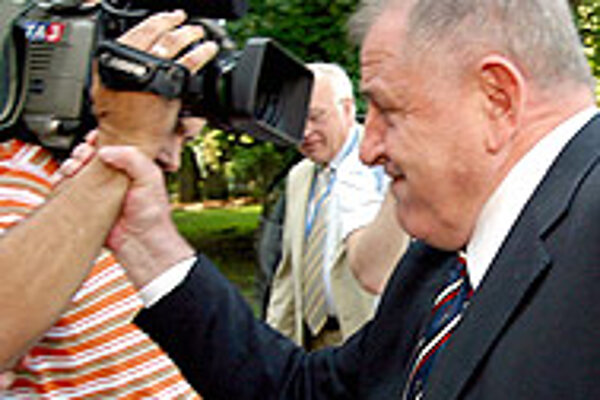 Font size:A-|A+
THE SLOVAK Syndicate of Journalists has already requested a meeting with Prime Minister Robert Fico to discuss his recent critical statements about the operation of the media in Slovakia, but has received no answer yet. The Slovak Spectator talked to chairman of the syndicate Zuzana Krútka who shared her views on the new draft press code, the trend of Slovak media becoming tabloid and the impact of economic pressures on journalism.

The Slovak Spectator (TSS): Do you think that the absence of a new press code has harmed the current state of the Slovak media?

TSS: You have said once that the Press Act from 1966 was a revolutionary one, and a good one.

ZK: That's true - for its time. Amendments to the act made after the fall of the totalitarian regime in 1990 (sic) have been made very carelessly. Everybody expected a new act to be passed soon, so only the most obvious points connected with the previous regime were omitted from the law.

TSS: Which did not suffice, of course.

ZK: This act did not count on the private ownership of media. And it did not count, either, on the current technological progress - it could not have possibly done that. The private ownership of media is basically targeted on profit. For private investors, distributing information about current events and opinions is usually an activity comparable to the production and sale of cars or shoes. But information is a very specific kind of goods. And it is to be treated in a very careful and cautious way. Moreover, if a single person or group controls a substantial part of the media market, there is a risk of bias and even abuse. The Broadcast and Re-transmission Act bans cross-ownership of media, but so far no act has stipulated that the ownership of print media must be stated. Thus, a paragraph concerning the transparency of ownership is necessary for the act.

TSS: What do you think the insufficient definition of private media has done in Slovakia, specifically?

ZK: Most strikingly, the trend of the "tabloidisation" of media. Not just with the media that define themselves as tabloids, but also with other media. The influential media have launched tabloid forms, too. So it has certainly has an impact on how journalism is today.

TSS: And what has the insufficient legal framework for technological progress caused?

ZK: At the end of 1960s, we had not anticipated, of course, that there would be something like the Internet one day. So far, the Internet has remained uncategorised to a certain extent. Moreover, it is causing international trouble, of course. This is very hard to arrange from the legal point of view. Basically, this is a worldwide puzzle waiting for its solution.

In spite of this, the Slovak Syndicate of Journalists proposes one thing. The press act presupposes that it will apply also to the electronic versions of the printed press. We propose that it should apply also to those news websites that fulfill the criteria for periodicals except that they are published on the web, and not in print. Certainly the number of news websites will increase, and they will be even more and more widely read.

ZK: It should not. For example, if a news website publishes false information, insulting someone, currently there is no right to defend oneself. On the other hand, when it runs, let's say, some investigative stories that stir things up and bring the paper to trial, the journalist will have no right to protect his or her source.

TSS: You spoke about the "tabloidisation" of media, but you did not mention state-run media. In your opinion, what is the current state of public media?

ZK: Both public media have the problem of being under-financed, I think. This problem has long been postponed and not solved. The form of licence fees should have been changed a long time ago. Not to mention that the term "licence fees" is long overdue for a change, as it does not come close to defining the thing we are talking about. The licence fee used to be a fee for owning a radio set, and for getting a licence. Today, it is basically a fee paid for a service rendered to citizens, which is not commercial, and not targeted at earning money, but at feeding the peoples' needs of various kinds: the need for information, interest in sports, culture, politics.

TSS: What do you think about the replacement of journalists taking place every time the general directors come and go, or when the director thinks it is necessary to change the whole news staff? People work there for a year or two, and they are replaced.

ZK: Unfortunately, this does not happen just in television. I would say this happens in all kinds of media. Maybe even more in private media than in the public ones. From the outside, it looks like a fascination with youth, with the ambition of the young. But I see two things behind this. Firstly, the young reporter does not have to be paid as well. And secondly, he or she may also be manipulated. I am convinced that this is happening. However, it is difficult to prove. But you can already see, for example, during press conferences that some journalists pose questions that are directed in a certain way. In short, a journalist was told in advance to bring something from the press conference, in a predetermined and clear sense. He or she has not been assigned the duty of uncovering the truth.

TSS: Does this means a manipulation of the information, or not?

ZK: Yes. You cannot do a similar thing to someone who has several years of practice and experience. He or she has a certain detached view. I consider this a rather big problem. Only time can help to solve it. It will still happen, until due to a natural evolution, the replacement and exchange of journalists becomes slower. And I think that when journalists are trained, they should be warned in advance that they can come across such a thing, and they should learn how to defend against such things.

TSS: And is not possible to arrange things so that a journalist can defend himself or herself against such things?

ZK: Yes, of course it is. It is just that the law has two sides, and the person who sells his or her work is always at a disadvantage. Maybe he or she has fewer resources, and employers can take advantage of that from the legal point of view.

The Syndicate of Slovak Journalists is promoting so-called editorial statuses, which would co-ordinate relations between employers and journalists. Unfortunately, we have not been successful so far. Journalists should understand that they should do something on their own to improve their position in their workplace. There have been cases of unjust dismissals of journalists. If the journalists concerned were the SSN members, we offered them free legal help.

TSS: Seven journalists have been quit or been fired from the public broadcaster since January, and there have been allegations of political interference in stories.

ZK: As for the STV, so many mistakes have been made over the years, as the directors kept changing, as well as the opinions. Today, we are just reaping the harvest of these mistakes.

I took part in a special meeting of the STV Council on August 8, which dealt with the causes of a mass exodus of the editors and reporters. The problem is also that apart from the leadership, the young journalists in this team do not have older colleagues with longer journalistic and real-life experience who could give them friendly advice.

I believe that mainly due to their young age and lack of experience, young people do not understand sufficiently what is the heart of the public broadcast. They do not understand that the editor-in-chief or the broadcast supervisor views the programme as a whole, and sees their part in context; that the STV newscast should give viewers another pool of issues and themes, and a different treatment than other TV channels. The controversial decisions of the managers, and their arguments, are not perfect, but they have convinced me in most of the cases.

It turned out that politicians are mistaking public media for state media - fully subsidised by state - but the news management is trying to resist the pressures. I can only hope that this will not mean further under-financing of the STV.

TSS: Prime Minister Robert Fico attacked practically all the media and accused them of bias and corruption, when he tried to protect Labour Minister Viera Tomanová. Do you think that Fico is fighting with the media rightfully and fairly, or not?

ZK: It is sad, embarrassing and by no means fair, as he does not confront an individual journalist, and he does not accuse specific journalists of corruption, but he rather expresses contempt for the whole journalistic community, which the SSN protested against several times. On June 21, we submitted a letter to the prime minister in which we ask him - if he really wants to help improve the situation - to meet with us. To this day, we have not received any answer.