EVEN though she grew up in Syria, Slovakia has always been a part of Rasha Kotrash's life.
"My father and mother studied at university here," she said. "This is where they met."
Before arriving to take part in the Studia Academica Slovaca (SAS) summer programme this year, Kotrash's Slovak vocabulary was limited to a handful of words such as dobre, dobrý deň, ďakujem and Ježiš Mária - she laughs as she lists them off. 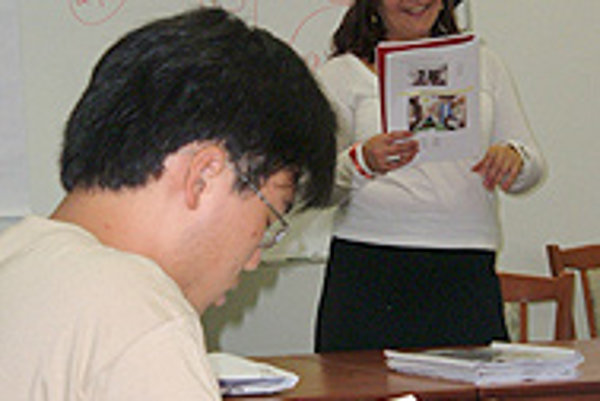 Font size:A-|A+
EVEN though she grew up in Syria, Slovakia has always been a part of Rasha Kotrash's life.

"My father and mother studied at university here," she said. "This is where they met."

Before arriving to take part in the Studia Academica Slovaca (SAS) summer programme this year, Kotrash's Slovak vocabulary was limited to a handful of words such as dobre, dobrý deň, ďakujem and Ježiš Mária - she laughs as she lists them off.

But the 21-year-old is eager to learn more in a country she's already come to love.

"Everything is green," she said. "I like it so much. The air is so fresh, the people are so kind."

This year, more than 120 students from 27 countries are taking part in the programme, which combines Slovak language training with trips and cultural events to teach students more about the country. The 2007 summer programme started on August 5.

Students' reasons for signing up are different, but many haven't changed since the programme was first offered 43 years ago: family roots in Slovakia; a Slovak girlfriend, boyfriend or spouse; studying Slovak or Slavic languages at university; a desire to learn more about a different culture.

"Then there are just fans of the Slovak language," said Eva Vojtechová, who works in administration for the SAS. "They like the sound of it."

But in recent years, more people have started coming for different reasons.

There is also a growing number from English-speaking countries who come to Slovakia to teach English, she said.

Among them are Bo Lancaster and Rebecca Gregoire, two American English teachers living in Slovakia.

"I'm tired of not speaking Slovak and not understanding it," said Lancaster, 25. "The only Slovak I've learned is by asking people, 'Čo je to?' (What is that?) That gives me some words but it doesn't mean I can speak the language."

Fatih Calisir, a 25-year-old from Turkey, wants to learn Slovak because he's planning on spending a lot more time here. The history student wants to write his thesis on Slovak-Turk relations in the 17th century.

"I want to do my research here through the archives," he said. "So I thought I better learn Slovak first."

Balász Kiss has similar reasons. He is working on a project called Rozštiepená Minulosť (Shattered Past) that will study Slovak-Hungarian relations throughout history.

"(Learning Slovak) will be very useful to make a dialogue between Hungarian and Slovak historians," said Kiss, a 26-year-old history and political science student from Budapest.

He took part in the programme as a beginner last year and decided to come back to build on what he learned.

"When I came here last year, I didn't know anything," he said.

SAS students are divided into groups depending on their skill level and language of instruction.

They have daily lessons from instructors who teach Slovak at universities in Slovakia or abroad.

There are also trips to museums and historical sites, and events that highlight Slovak culture - from folk music and dances to modern arts.

"People from other countries often think of Slovakia as just having folk songs and folk costumes," Vojtechová said. "We want to show them modern art and modern music."

"I'm going to bring my kids to see the traditional cooking and dancing," Gregoire said.

Aside from that, the SAS also fosters an informal culture where people speak Slovak with each other even outside of class, said Nora Bako, a 21-year-old Hungarian who is studying Slovak at university.

"I want to speak Slovak with the others because I can learn more," said Bako, who also had a Slovak grandfather.

For Vojtechová, that can be one of the most rewarding things about the programme.

"It's a special atmosphere - not only the course, but in the afternoons and the evenings," she said. "It's nice to see the different cultures that are here and they can speak together.

"You can have one student from Luxembourg, one from Cyprus and one from Croatia, and what is the language they speak? Slovak."