THE CABINET has passed a draft bill that would prevent private health insurers operating on the Slovak market from using their profit to pay dividends to their shareholders.
The revision to the Act on Health Insurers also cuts the cap on collected premiums that health insurers can use to cover administration costs from the current four percent to three percent. 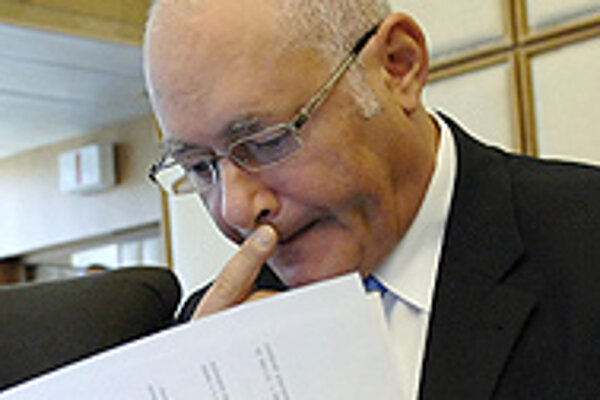 Font size:A-|A+
THE CABINET has passed a draft bill that would prevent private health insurers operating on the Slovak market from using their profit to pay dividends to their shareholders.

The revision to the Act on Health Insurers also cuts the cap on collected premiums that health insurers can use to cover administration costs from the current four percent to three percent.

The revision, which substantially modifies the operation of health insurers on the Slovak market, still has to make it through parliament. The previous two drafts tailored by the ruling coalition's Smer party did not make it through.

The health insurers have called the previous bills tools for the "indirect expropriation" of insurance companies in Slovakia.

Prime Minister Robert Fico and Health Minister Ivan Valentovič proudly stand behind the bill they have produced, suggesting that health insurance companies are making their profit from public funds and thus it would be inappropriate for them to use these funds to pay dividends to their shareholders. The health insurers must feed their profit back into the health system, Fico and Valentovič said.

"We are against someone making a profit from public insurance," said Fico, as quoted by the Sme daily. The government's intention is to return a public character to the health insurance system since "health is not a product," Fico added.

Health insurers have been condemning the bill from its very inception and have said that it is a systematic attack on their operation. If parliament passes the bill, the insurers said they would take the legislation to international courts.

"This government has taken the road of creating a single insurance company," Eduard Kováč, executive director of the Association of Health Insurers, told The Slovak Spectator.

"Private insurers came here and started developing their operations in good faith and in line with the legislation passed by the government in 2004," Kováč said. "Now, the rules of the game are changing during half-time. This is unacceptable."

The cabinet has also sent a negative message to investors in other areas, he added.

According to Kováč, the cabinet is going against its own programme declaration, in which it said that it would "not take any steps that might endanger domestic or foreign investments".

"We assume that there is a problem with the constitution, not to mention the problem of violating international agreements about investment protection," said Kováč. "Our next steps will depend on the final form of the law."

If the bill remains in its current form, it is highly probable that certain health insurers and their shareholders will seek protection for their investments in court, Kováč added.

If the government forces private health insurers out of the public health insurance system, their damages would amount to approximately Sk30 billion (€900.35 million), the Association of Health Insurers said earlier this year.

The Union health insurer has already said that if the bill is passed, the union is ready to turn to the international courts to protect its investments.

"The passed draft bill is aimed at pushing private insurers out of the market and enforcing the monopoly of a single health insurer," Zuzana Horníková, spokeswoman of health insurer Dôvera, told the TASR newswire. Cutting the cap for covering administrative expenses will affect insurers with a low number of clients the most, she added.

The Health Ministry has been defending the law and has disregarded the doubts of private insurers, suggesting that only the Constitutional Court can rule whether the law is in harmony with the constitution. Silvia Balázsiková, the ministry's spokeswoman, told The Slovak Spectator that the ministry considers the private health insurers' arguments to be biased.

Private health insurers turned a profit of approximately Sk1 billion (€30 million) last year, based on the estimates of the non-governmental Health Policy Institute.

The Association of Health Insurers argues that the health minister has not yet clearly explained to the public on what kind of legal analysis his draft is based, while legal experts see the bill as an interference into the economic performance of insurers.

Constitutional lawyer Radoslav Procházka and law firm Buzinger & Partners also said that the minister's draft is at odds with the constitution in the issue of protection of the right to ownership. The draft would intervene in health insurers' right to conduct business and to own and use their assets, Buzinger & Partners told SITA.

With files from Marta Durianova.