TRNAVA's influx of automotive industry investors has helped the city and the region cut their unemployment rates dramatically.
According to the SlovakInvest Agency, the unemployment rate in the Trnava Region was 6.14 percent last December. The Trnava district itself had a rate of less than five percent. 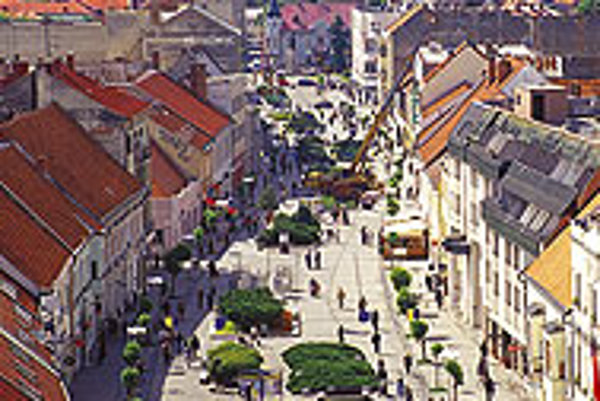 Font size:A-|A+0
TRNAVA's influx of automotive industry investors has helped the city and the region cut their unemployment rates dramatically.

According to the SlovakInvest Agency, the unemployment rate in the Trnava Region was 6.14 percent last December. The Trnava district itself had a rate of less than five percent.

Trnava is now getting ready for investments with higher added value, the SITA newswire reported.

The city's new activities are meant to create better conditions for investment in the fields of science, research and innovation, Pavol Tomašovič, the mayor's spokesman, told SITA.

"This way we want to create an environment for creating highly-qualified and expert job positions," he said.

So far, investors have brought more than 4,500 jobs to the region.

Trnava's strategy could soon be supported by the automotive cluster that is planned to be established in October. It should help to link education with the production sector, Štefan Chudoba, who was appointed to prepare the project, told The Slovak Spectator.

According to SITA, Trnava has already started negotiating with potential investors; however, the city refused to name the specific companies. First they want to ensure the location and technical conditions, Tomašovič said.

UP to 400 jobs are expected to be created in the industrial park in Hlohovec.

Local authorities are currently negotiating with two potential investors. Details about the investors and their investments have not yet been finalised.

"In this phase of negotiations it's too early to publish any information about the investors and their intentions," Eva Uhráková, the Hlohovec mayor's spokeswoman, told the SITA newswire.

Two companies have invested into the industrial park in Hlohovec so far. The first is Faurecia Automotive Slovakia, which produces seats, consoles, upholstery, front bumpers and exhaust systems for the automotive industry. Another company, Vetter Slovakia - a part of the German company Vetter Holding - produces and packs dried fruits, SITA reported.

Both companies together have invested nearly Sk1.4 billion (€41.9 million) and created around 530 jobs, with another 200 vacancies possible in the future, Uhráková told SITA.

THE TRNAVA Region was second only to Bratislava in apartment construction so far this year, with the number of completed flats skyrocketing by 150 percent.

The 746 completed flats is almost four times as many as in the neighbouring Trenčín Region, the Pravda daily reported.

"It is caused by investments not just from the car producer PSA Peugeot Citroen, but also from several other companies," said Marián Cipár, the head of the department of regional development of the Trnava Region. "Employment is growing, and consequently so are people's incomes, which leads to the investments in housing."

Trnava is expected to keep up its blistering rate of flats completed for some time, as it has the highest number of apartment buildings under construction.

D1 motorway could get wider between Bratislava and Trnava

THE CONSTRUCTION Ministry will look into widening the D1 motorway to six lanes between Bratislava and Trnava, the Sme daily reported.

The ministry expects the motorway will not meet the area's transportation needs by 2010, so it plans to launch a technical study into the expansion this month, ministry spokesman Marián Jánošík said.

"The study will examine four variations, from which the most effective will be chosen for further stages of the project," Jánošík said.

The project would be financially demanding, expected to cost Sk8 billion (€239.7 million). There is also the complication that the construction has to take place while the motorway is still in use.

"That is why the construction will last as long as about four years," Jánošík said.

AN AUSTRIAN company that makes specialised equipment for banks is getting ready to build a new plant in Slovakia.

The new investment in Kostolné Kračany is to expand the production capacity of an existing facility.

The new plant will be built by an affiliated company, Wertheim Elements. It is planned to cover 133,000 square metres and include storage facilities and a dispatch centre.

The project is expected to cost Sk676 million (€20 million) in total. Construction will start next year.

The engineering plant will specialise in producing and assembling parts for safes, safety transport equipment, and other bank technologies. The plant will process 196,000 tonnes of steel and galvanised sheets yearly. The Austrian investor plans to buy the raw materials in Slovakia.

Most of the products currently made in Kostolné Kračany are sold in foreign markets.

Piešťany Airport to get new terminal

Piešťany Airport has received Sk23 million (€689,000) from the Transport Ministry to modernise its passenger terminal and complete a runway.

The new technological infrastructure could be ready to use by the middle of next year, the Hospodárske Noviny reported.

The government currently holds 34 percent of the shares in Piešťany Airport; the town of Piešťany and Trnava Region have 33 percent each.

It cost the Town of Galanta Sk250 million (€7.5 million) to purchase the land and build the park. The European Union contributed Sk130 million (€3.9 million) of that through its Industry and Services programme.

It took a little more than a year to build the park. Galandia draws the water for its pools from two geo-thermal drills, which until now had only been used in the town for heating a housing complex and the hospital.

The water temperature in the relaxation pools varies between 30 and 36 Celsius. The indoor section of the park, which will be open year-round, can fit 350 visitors.

The outer part, opened only during the summer season, can be used by 700 visitors.

The construction of Galandia is the first step towards building an extensive tourism centre in Galanta. The town is also planning for a hotel complex to be built in the coming months.