THE arrival of the Rotterdam Youth Symphony Orchestra (RJSO), which is giving four concerts in three Slovak cities later this month, comes at an exciting point in the relationship between Slovakia and the Netherlands. 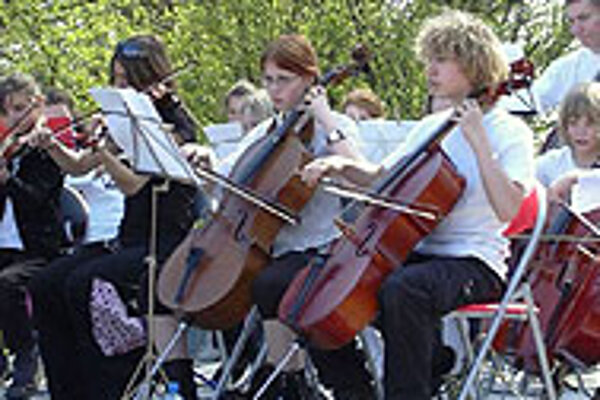 Font size:A-|A+
THE arrival of the Rotterdam Youth Symphony Orchestra (RJSO), which is giving four concerts in three Slovak cities later this month, comes at an exciting point in the relationship between Slovakia and the Netherlands.

In the sixteen years since Bratislava and Rotterdam were named sister cities, the Netherlands has become a major trading partner to Slovakia in both economic - investing more than $2.5 billion in the Slovak economy by the end of 2006, according to the National Bank of Slovakia - and cultural terms.

This past May, Queen Beatrix of the Netherlands paid an official visit to Bratislava and Košice to celebrate Slovakia's new position in the European community. And in October, a delegation from Rotterdam is visiting the capital as well.

"Tourists from the Netherlands really started learning about Slovakia and coming to it once it joined the European Union," Sacha Rothenberger, Culture Attaché at the Netherlands Embassy in Bratislava, told The Slovak Spectator. "And since the Netherlands opened its labour market to the new EU member states, Slovaks have been going there for job opportunities and university study."

With political and economic ties between the countries flourishing, the new Dutch ambassador to Slovakia, Rob Swartbol, invited the RJSO to tour Slovakia as a way of promoting cultural exchange between the young.

"Young people will play an important part in uniting Europe because they don't bear the weight of the past," Rothenberger said. "They'll be the ones determining how their country develops."

Founded in 1972, the RJSO is Rotterdam's finest youth orchestra. It has 55 members, aged 14-26, who play styles ranging from classical music to modern pieces and updated versions of classical works. One of its most exciting performances took place last year at the Veerhaven port in Rotterdam, in which the orchestra raised money for Warchild, a charity dedicated to caring for children affected by war, by playing Dvořák's Ninth Symphony while floating on a barge.

The program begins with Night on a Bare Mountain, a narrative orchestral work by Russian composer Modest Mussorgsky. Originally considered too "crude and barbaric" to perform, it became popular after being re-orchestrated by fellow Russian Nikolai Rimsky-Korsakov upon Mussorgsky's death.

The work's narrative is based on St. John's Eve (June 23), the pagan celebration of the summer solstice also known as Midsummer Night's Eve, during which, according to legend, the wall separating the real world and that of witches and fairies temporarily lifts. To this day, many European countries, especially Ireland and eastern European countries, mark the solstice by building bonfires, which people jump through to cleanse the spirit.

Mussorgsky's score depicts the mystical, fiery nature of St. John's Eve with ethereal violin melodies and frenzied woodwinds that forcefully swirl and then dip into a lull before returning with an explosion of wild abandon.

"It's exactly because the kids in the orchestra are so young that they enjoy and know how to communicate this kind of passionate, Romantic music," Dick van Gasteren, the RJSO's conductor, told The Slovak Spectator. "I've tried playing more classical music, like Mozart, with them, but they find it too abstract. They like the intensity, and they do it well."

The next part of the program will be a solo performance by 17-year-old soprano Lilian Farahani, who's been studying music in the Hague since she was six.

"Lilian is incredibly talented," van Gasteren said. "Her voice is so light and clear, I knew as soon as I heard it that I wanted to work with her."

Farahani will start with Měsíčku na nebi hlubokem, an aria from the opera Rusalka by Czech composer Antonín Dvořák, which she used this past March to win an Audience Prize and Honourable Mention at the Prinses Christina Concours in the Hague.

"She brings such innocence to the music," van Gasteren continued. "We'll be accompanying her and providing her with the support she needs to let her voice flow."

The final piece on the programme is Tchaikovsky's Fifth Symphony, a work of highly balletic nature that preceeded, and perhaps provided the impetus for, the score to Sleeping Beauty.

Tchaikovsky was eager to see his Fifth Symphony succeed after a critic had derided his Violin Concerto as proof the composer was "written out". But while still unconvinced of its value, he wrote to his patron "I have come to the conclusion that it is a failure. There is something repellent, something superfluous, patchy and insincere which the public instinctively recognizes. It was obvious to me that the ovations I received were prompted more by my earlier work, and that the Symphony itself did not really please the audience."

Since then, the Fifth Symphony has become an audience favourite for its sentimental themes, carried delicately throughout by the clarinet, and radiant melodies.

"We have two clarinet players in the orchestra," van Gasteren said. "The public must decide in the end how they are, but I think they play it great."

On August 21, the orchestra moves to the south-western town of Podhájska and on August 22, it performs at Mierové Square in the city of Trenčín. It then returns to Bratislava to take part in one of the major goals of the tour: a performance with young Slovak musicians.

On August 24, 10 musicians from the Ľudovít Rajter Academy for Young Artists in Bratislava will accompany the RJSO in a performance on the Main Square. The two groups will also take a day trip to Červený Kameň Castle, near the capital.

"It's important that young people from different countries use music as a way of having fun together," Rothenberger from the Netherlands Embassy said.

And if the RJSO's visit goes well, young Slovak musicians may some day get the opportunity to perform in the Netherlands.

"It's all a matter of chemistry," Rothenberger said.