THE EARTHQUAKE on the United States mortgage market has shaken Western Europe, but it seems that the emerging markets of Central Europe will remain resistant to the crisis, according to mortgage market watchers.
The crisis has not yet resonated aside from the foreign exchange market, where the Slovak currency weakened by 50 hellers. 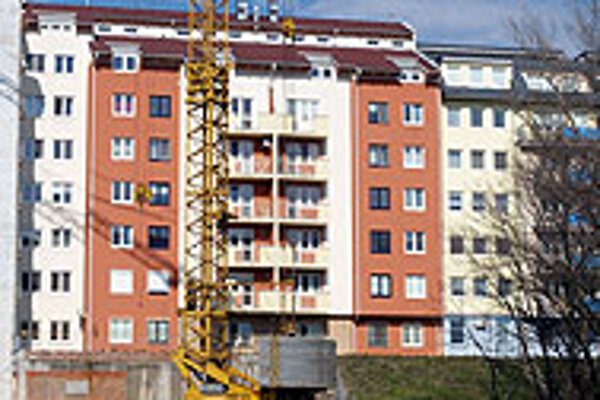 Font size:A-|A+0
THE EARTHQUAKE on the United States mortgage market has shaken Western Europe, but it seems that the emerging markets of Central Europe will remain resistant to the crisis, according to mortgage market watchers.

The crisis has not yet resonated aside from the foreign exchange market, where the Slovak currency weakened by 50 hellers.

The US loan market had been offering low interest rates, making mortgage loans available for low-income clients with poor repayment histories. But over the last several years, interest has been climbing to the point where many debtors were no longer able to pay the higher regular loan installments.

The clients' inability to pay their mortgage loans pushed down real estate prices and dragged the housing market into a recession, according to market watchers.

Several US mortgage houses are now facing financial difficulties and even bankruptcy. Related areas, such as hedge and mutual funds, have also been hit.

Slovak market watchers agree that the US mortgage crisis, though seriously affecting some Western European financial markets, will not likely lead to any restrictions on the Slovak housing and mortgage markets.

"As far as the domestic mortgage market is concerned, the situation in the USA does not affect it," Robert Prega, chief analyst with Tatra Banka, told The Slovak Spectator. "Slovak real estate prices continue to rise, and due to the unsaturated market, this trend is unlikely to change in the coming years. The interest rates in the USA recorded significant hikes over the last few years, while the interest rates in Slovak crowns were quite stable.

"The slower economic growth and the surge in unemployment were also factors affecting Americans' ability to pay the loans," he continued. In Slovakia, the growth of the economy is accelerating, real wages are growing and unemployment is decreasing, he added.

The level of the overall household debt exposure, as well as the average amount of the mortgage loans in relation to the price of collateral, are significantly higher in the USA than in Slovakia, according to Prega.

The US mortgage crisis found its way into European financial markets because some European funds invested in the troubled US securities. As a result, the French BNP Paribas temporarily ceased operation of its three funds, administering €1.6 b which the US mortgage banks used to borrow money for their sub-prime clients.

European banks became worried that their clients might want their money back from the funds, so they started boosting their supply of cash. Increased demand for cash pushed up the inter-bank offered rate at which banks borrow funds from each other. This caused major problems in liquidity in the European financial market.

To calm down the financial market, the European Central Bank injected €95 billion in the market on August 9. The last time the ECB made such an intervention was after the terrorist attacks of September 11, the Lidové Noviny wrote.

Concerns that the US housing market ordeal might actually be larger than anticipated, which could negatively impact US household consumption and consequently global economic growth, have been continuing about a month now, Martin Lenko, an analyst with VÚB Bank, told The Slovak Spectator.

"The concerns that were mentioned led to increased aversion to risk, and this has been transmitted into increased bond prices - and decreased bond yields - on both sides of the Atlantic," Lenko said.

The money and bond markets, as well as investment funds in Slovakia, have been almost untouched so far, according to analysts.

"I do not suppose that investments into the sub-prime US real estate market segment related to the crisis make up an important part of the investment portfolio of the financial institutions in Central Europe," Mária Valachyová, an analyst with Slovenská Sporiteľňa, told The Slovak Spectator.

Global investors hungry for safe investments, such as the US government and some European bonds, were not rushing to buy local bonds of emerging markets. Thus the price and the yields of the Slovak local bonds did not change much, said Lenko of VÚB Bank.

But Marcel Klimek, a risk manager with UniCredit Bank Slovakia, said this trend could change, because investors might expect higher risk premiums - a premium paid for holding a risky, but possibly more lucrative, asset - in the assets of these emerging markets.

"Of course, the anxiety of financial markets is partially affecting Slovakia," Valachyová said. "It is mainly in the foreign exchange market where investors are withdrawing their assets from riskier emerging markets, including Slovakia."

Due to investors' growing aversion to risk, the Slovak crown weakened from 33 SKK/EUR at the end of July to 33.5 SKK/EUR in mid-August, said Prega of Tatra Banka.

"Despite this, the crown foreign exchange rate has already experienced much larger negative impacts from the foreign financial markets, and the current developments are not changing our optimistic outlook for the crown in the coming months," Prega said.

The impact of the crisis on Slovakia's economy will mainly depend on how badly the mortgage crisis hits the US economy, said Valachyová from Slovenská Sporiteľňa.

"So far, the prevailing opinion is that the impact will not be significant," she told the Spectator. "Sub-prime mortgages make up about one-quarter of all the mortgages in the US, so US consumption growth is expected to slow down only mildly."

"I suppose that central banks are able to calm down the situation on the market," Valachyová said.

Lenko said opinions on how to solve the crisis vary, but the official representatives of the United States Federal Reserve consider it a rather short-term phenomenon that will fade away in the mid-term horizon.

"We are inclined to this opinion, and we do not think the current situation could endanger the economy of Slovakia and its neighbouring countries," he said.