The power of the wind - welcome or not?

SLOVAK environmentalists have been calling for renewable power sources that could help reduce the country's energy dependence on a single country, currently Russia. A wind farm planned for the Nitra region is being touted as a solution, but it has also opened up a debate about the spread of wind power in Slovakia. 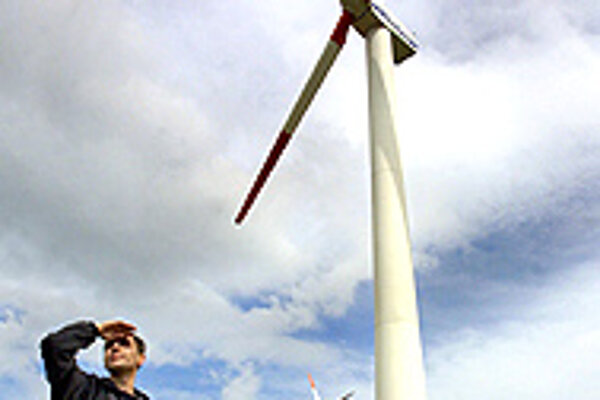 Font size:A-|A+0
SLOVAK environmentalists have been calling for renewable power sources that could help reduce the country's energy dependence on a single country, currently Russia. A wind farm planned for the Nitra region is being touted as a solution, but it has also opened up a debate about the spread of wind power in Slovakia.

An Austrian company, CE Energy Holding AG, is planning to build a park with wind power plants at Šaľa-Močenok and Vráble. The Slovak business weekly Trend ranked their investment plans among the top five investments in July.

Meanwhile, the Spanish company Generación Eólica International wants to invest in wind turbines in Dobšiná-Telgárt, with an estimated cost of around Sk1 billion (€29.9 million).

The Environment Ministry is currently working on a study on the possibilities of establishing wind power plants in Slovakia. In the meantime, each wind power plant proposal has to be assessed in terms of its impact on the environment.

"We will not approve the building of any wind power plant where it is not appropriate in terms of windiness and the impact on the environment, as well as on the visual appearance of the landscape," the ministry told The Slovak Spectator.

"Both projects are at the environmental assessment stage and further studies are needed so that the final outline of both projects will be defined in the following months," Hegeduš told The Slovak Spectator.

CE Energy chose the region of Šaľa and Vráble because it has some of the best conditions for a wind farm, according to Hegeduš. It has the wind potential to produce enough electricity, a minimum negative effect on the environment, a point for connecting the plant to the national electricity grid network, and the support of the local community - the mayor, the municipality, local authorities, and ordinary citizens said.

But Šaľa's Mayor Martin Alföldi did not express much support for the wind park.

"Can you imagine 25 huge wind turbines near the town?" said Alföldi. "The sight will definitely not make a pretty environment."

But Alföldi's main concerns are related to the town's master plan. CE Energy has already proposed three different locations, but none of them is in line with the master plan, he said.

The wind park would affect the location they planned for a traffic bypass and an industrial park, Alföldi said. He also argued that the municipality was told by the Environment Ministry that the location is not very windy, and therefore conditions are not ideal for wind turbines.

"The only positive aspect is that the investor has promised the affected municipalities a share of the revenue," Alföldi told The Slovak Spectator.

Hegeduš confirmed that the affected municipalities will get annual financial support, depending on the electricity production of the projects. The way the support will be distributed will be specifically defined before construction begins, he added.

Landowners and farmers whose land the turbines will be built on will be paid annual rent and compensations from the wind park, and CE Energy will support the region in other ways, the CEO said.

Approximately 20 to 30 percent of the construction work will be contracted out to local companies. This amount of investment stimulates the local economy as a whole and indirectly helps to create jobs, Hegeduš added.

Wind energy is a highly progressive technology that is heavily supported and promoted by the European Union as a green source of energy that is not dependent on the imports of traditional fossil fuels, produces no pollution and requires no extractions from the environment, Hegeduš said.

The wind farm could also become a tourism attraction for the region, he said. Other places with wind farms have found that tourists are drawn by the new element in the landscape.

That could introduce them to other features of the area, such as vineyards and folk art, Hegeduš said. For that reason, all CE Energy projects are planned in regions that already have an industrial presence and not many tourist attractions.

ENEL Slovenské Elektrárne is working on plans for a wind park with a capacity of 104 megawatts, said company spokesman Juraj Kopřiva.

However, the priority remains completing the Mochovce nuclear power plant - which is an ecological energy source because it can supply Slovakia and other surrounding countries without producing greenhouse gas, he said.

"When it comes to wind energy, the use of this source must be managed so that it is not at an advantage over other electrical energy sources," Kopřiva told The Slovak Spectator.

Unbridled expansion of volatile energy sources can cause complications, he explained.

In the case of wind energy, you need a reserve of other energy sources that can substitute the wind when it stops blowing.

"These ancillary services cost a lot of money, and at the end of the day wind energy can increase the average price of electrical power," Kopřiva said.

ENEL Slovenské Elektrárne will carry out their wind-park project only if it's in line with the state's overall energy strategy, Kopřiva told The Slovak Spectator.

"For that reason, building small water power plants looks most promising at the moment," he added.

Sustainable energy sources proposed by the Energy Policy of the Slovak Republic:

Source: The Ministry of Environment