Slovak 'ocean' to heal and heat

THE ONLY thing missing is the sea, Slovaks often say when asked about the natural beauties of their homeland. However, land-locked Slovakia might soon have the first salt-water spa in Central Europe. 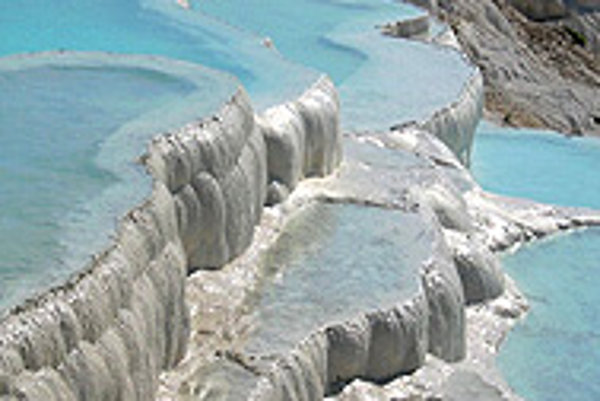 Font size:A-|A+
THE ONLY thing missing is the sea, Slovaks often say when asked about the natural beauties of their homeland. However, land-locked Slovakia might soon have the first salt-water spa in Central Europe.

Slovak company Magma Zafír is planning to use water from the prehistoric Tethys Ocean, located around 2,000 metres underground in Bardoňovo, a small village in the Nitra region.

The company has invested €5.1 million (Sk170.7 million) in the first stages of the Aqua Tethys spa project and is ready to cooperate with partners and investors, said CEO Miroslav Žitňanský. The cost of the whole project might exceed €107 million (Sk3.6 billion), he added.

The company owns an exploratory license for geothermal water and energy in the Levice Block territory. The license gives them the exclusive right to carry out all geological works in a 52-square-kilometre area of the block, including drilling wells and using the geothermal water and geothermal energy they obtain.

Magma Zafír also owns a plot of 120 hectares and the necessary permissions to build a complex for recreation, healing, education and scientific research.

The main tourist attraction in their plan is the Tethys World aqua park. It will feature seven outdoor and two indoor pools, a spa and wellness centre with a capacity of 1,000 patients, around 100 bungalows, and an 18-hole golf course.

The whole area will have a capacity of 12,000 people daily in high season, Magma Zafir estimates.

The planned research and education centre, known as the oceanium, is an important part of the plans, because it will be the first facility of its kind in Central Europe, according to Žitňanský.

Along with the recreation centre, the project also includes greenhouses and crop drying centres for the planned agricultural park, where the company wants to cultivate wood, vegetables and aloe vera, he said.

Magma Zafir is ready to establish joint-venture companies with foreign investors to participate in different parts of the project. Construction is expected to start in 2008 and take five years to complete, the company said.

Bardoňovo is a part of the Podhájska micro-region and it lies on the Levice Block, in the southern part of Slovakia. The block is a tectonic relic from prehistoric times. At a depth of 1,700 to 2,000 metres underground it hides the prehistoric Tethys, which has salt water of about 80 Celsius, Bardoňovo Mayor Ján Markovič said.

So far, the biggest tourist attractions in the village of 886 residents are a historic mansion, a 100-year-old sycamore and a unique pagoda tree, Markovič told The Slovak Spectator.

"Thanks to the fact that we are part of the micro-region, tourism is working," he said.

But Aqua Tethys would no doubt help local tourism, he added.

"As we need to expand the tourist industry in the village and the region, the project is a chance for us," Markovič said.

The village will contribute to the investments as much as its limited budget allows, mostly taking part in building the infrastructure and settling ownership matters, Markovič said.

Magma Zafír already drilled three geothermal wells in 2006, named Alpheus, Scamander and Telesto, said Žitňanský. Alpheus and Scamander are production wells, which draw hot fluids from the earth that are then used for heating or converted to energy; Telesto is an injection well, where the geothermal fluids are safely disposed.

Each well will supply 12.1 megawatts of geothermal energy. The capacity of both production wells is a continuous flow of 100 litres of thermal water per second. They currently work on a geothermal pipeline network that joins the wells with two geothermal water exchangers.

Aqua Tethys is a registered trademark owned by Magma Zafír. According to Žitňanský, it will be used for all products and services that use water mined from the wells in Bardoňovo and the whole Levice Block. That will include not only the Tethys World facilities, but also wellness and dermatology products, because the company plans to desalinise the geothermal water and use the salt in the cosmetics and dermatology industry.

The trademark will also be used for the energy from the three wells. According to projections from Magma Zafír, the most geothermal energy that can be recovered will be about 126 megawatts and it will be used for heating the complex: particularly the planned 120 bungalows, nine pools, seven wellness centre buildings and the agricultural farm.

Eventually, the water is to provide the whole village of Bardoňovo with geothermal energy, Markovič told The Slovak Spectator.

Thermal water is a low-cost energy source, he said. The brief analysis the village has so far shows that with current prices, using geothermal energy for heating would cut the village's energy costs in half, said Markovič.

"Thanks to geothermal energy we could become an ecologically clean village, without the waste products of heating," Markovič told The Slovak Spectator.

According to the Slovak Environment Ministry, geothermal energy is the fourth most preferred sustainable energy source.