A tale of two regimes

MIROSLAV Lehký has witnessed two events that significantly altered the course of Slovak history. In August, Slovakia commemorates both of those anniversaries.
On August 21, 1968, the Warsaw Pact armies invaded Czechoslovakia. On August 29, 1944, the Slovak National Uprising began in the fascist Slovak State, which was a satellite of Hitler's Germany. 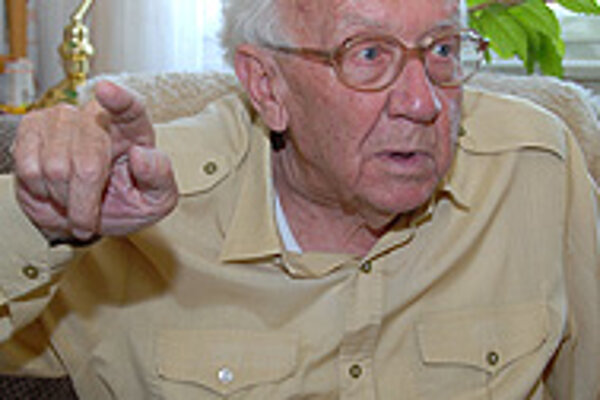 Font size:A-|A+
MIROSLAV Lehký has witnessed two events that significantly altered the course of Slovak history. In August, Slovakia commemorates both of those anniversaries.

On August 21, 1968, the Warsaw Pact armies invaded Czechoslovakia. On August 29, 1944, the Slovak National Uprising began in the fascist Slovak State, which was a satellite of Hitler's Germany.

In 1968, the Soviet Union and its satellites killed the Prague Spring reform movement, which was perceived as a serious threat to the totalitarian regime. In 1944, Slovaks tried to overthrow the fascist government led by Jozef Tiso, and thus joined the anti-fascist movement.

Lehký turned 88 this year - he credits regular bicycle tours with helping him live this long. He wants to help people understand how two different totalitarian regimes influenced the lives of people in the heart of Europe. He shared his life story with The Slovak Spectator.

Lehký was born in the Ilava district to a Czech father and a Slovenian mother.

"My father met my mother during the First World War on the Italian front," Lehký begins his story. "The Slovenian village where Mum came from was on the front line for three years, and Dad fought on the front. He married her and brought her to Slovakia."

In 1939, when the wartime Slovak State was founded, Lehký and his family were kicked out of Slovakia. The new regime was not only hostile towards Jews and Romas, but also the Czech population.

The tense atmosphere in the country was already starting to appear after the autonomy of Slovakia was announced in the autumn of 1938, Lehký said.

"Many petitions from Czech public servants in last months of 1938 to ministries in Prague prove that," he said.

Pavol Matula described the situation in an article called The Position of Czech Secondary School Lecturers in Slovakia from October 6, 1938 to March 14, 1939.

"We are treated like unwanted foreigners. . . There is no day that passes when Czechs are not blamed with no reason, or threatened by the press, the radio or official speakers during public speeches," he wrote.

"How could Archbishop (Ján) Sokol have said that he enjoyed prosperity during Tiso's Slovak State, when terrible things were happening?" Lehký asks, referring to a statement the archbishop made in December 2006.

Lehký's family fled to Brno, where they lived for three months in a train carriage at the railway station. Then one family showed mercy and rented them a one-bedroom flat.

Lehký found work as a railway track worker. After about six months, at the age of 23, he was sent with several thousand other railway workers to Germany for forced labour as part of the Totaleinsatz, the Nazis' wartime labour scheme. With German workers off fighting in the war, more than 13.5 million people from the occupied countries were forced to fill the labour gap. That included about 640,000 workers from the Protectorate of Bohemia and Moravia.

"We travelled on a fast train, there were thousands of us," he said. "We lived in Rostock, 18 in one room.

"I saw terrible things there," Lehký continued. "I was there starting on April 2, 1942. By the time I returned, I was 12 kilos underweight."

Lehký fled Germany in 1944, but the German secret police, the Gestapo, found him. He was arrested, tortured in prison, and returned to Rostock, where the end of the war reached him. He returned home on foot, a 1,200-kilometre journey that lasted from May 3, 1945 till June 6, 1945.

After the war, Lehký settled with his wife in Bratislava. He worked as an interpreter - during his time in Germany, he became skilled in German, English and Russian.

In 1950, he started working in the library of the Wood-processing Research Institute.

The communist secret police (ŠtB) twice asked him to collaborate with them: first in 1953, and again five years later. He refused.

"I was not afraid of them," Lehký said. "I had already had experience with the Gestapo."

He told the ŠtB that forcing him to cooperate was against the constitution of the Czechoslovak Republic.

"You have no right to recruit people," Lehký said he told the secret police.

He recalled that an ŠtB agent started explaining to him that the only certainty in life was death, and that there was no return from death.

Lehký responded, "Someone has returned."

The agents looked puzzled. "Who?" they asked.

At these words, the situation in the ŠtB room changed, the atmosphere becoming charged with shock. Presumably the agents themselves had a Catholic education.

"If someone threw a hand grenade into the room, they could not have been more afraid," Lehký said. "They threw all the papers into one pile and told me I could go home."

After that, he was left in peace.

After Czechoslovakia was occupied by Warsaw Pact armies in August 1968, communist party officials started a period called "Normalisation." This brought in policies to increase control over society, strengthen the dictatorship, and increase the public's servitude towards party and government bosses.

Lehký got involved in the dissident movement, along with his son. In 1977, Miroslav Lehký, Jr. signed Charter 77 - a protest against the growing bondage. Along with people like Václav Havel, he became a spokesman for the Charter.

In 1979, the Underground University was founded to provide unrestricted education. It first operated in Brno and Prague, and later came to Bratislava.

The university organised lectures and seminars in dissidents' flats. Czech and Slovak scientists and professors lectured in this way, including philosopher and political scientist Miroslav Kusý, historian Jozef Jablonický, and professors and lecturers from foreign universities such as Oxford. One of the key founding personalities was British theatre researcher Barbara Day.

Some lectures took place in Lehký's apartment in Karlova Ves. About 20 listeners came.

Lehký was a liaison between Bohemia and Slovakia. He used to go to the railway station, bus station and airport to welcome lecturers from abroad. They came to recognise him by his already-grey hair, he said.

Once the apartment building where Lehký lived was raided by police and ŠtB officers while people were gathered in his flat for a lecture.

The lecturer, a foreign professor from a military academy, was contacted at the Carlton Hotel and told that the lecture would not take place.

"And the police blocked everything here. They did not enter the flat," Lehký said. "But whenever I was not at home, they knew it. They came here and searched through my library. And they took some of my books."

Lehký is probably one of the last people who was jailed for political reasons in Slovakia.

The arrest happened after Slovak dissidents decided to commemorate the death of Danka Košanová, who was shot on the steps of Bratislava's Comenius University by a Russian soldier on August 21, 1968.

Lehký put some flowers on the university steps, then sat down on a bench in a nearby park. Shortly afterwards, Kusá joined him. Her husband had already been a political prisoner for eight months at that time.

"Your husband is in jail, what are you doing here?" the officer asked.

Right away, Lehký and Kusá were both asked to come with the police. Kusá was worried for Lehký, as he was 72 years old at the time.

Each of them was interrogated separately. After several minutes, the ŠtB officer questioning Lehký asked him when the regime would fall.

"And what will become of me?" the ŠtB member asked.

"Do not be afraid, nothing will happen to you, probably," Lehký assured him.

The ŠtB member set Lehký free. He persuaded him not to stop anywhere, and to go straight home, otherwise he would be arrested again, Lehký said.

Lehký's prediction about the fall of the regime was off by one month.

Today at 88, Lehký is a pensioner who grows flowers on the balcony.

And he still enjoys riding his bicycle on the Danube embankment.