THE LAST time The Slovak Spectator wrote about Wild Poppies (Divé maky) was on St. Nicholas Day, when the programme lit up Bratislava Castle with an exhibit of stunning portraits of the enrolled children by celebrity photographer Jakub Klimo. 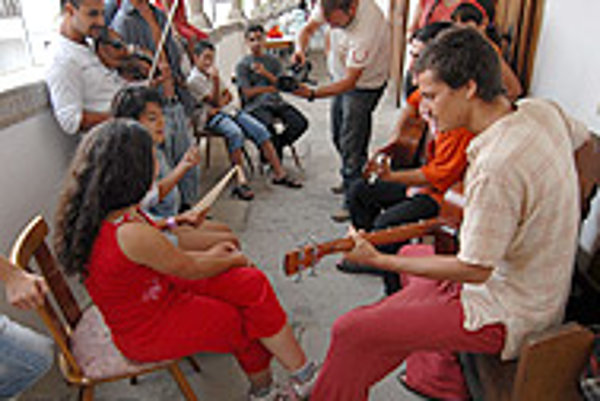 Font size:A-|A+0
THE LAST time The Slovak Spectator wrote about Wild Poppies (Divé maky) was on St. Nicholas Day, when the programme lit up Bratislava Castle with an exhibit of stunning portraits of the enrolled children by celebrity photographer Jakub Klimo.

In the eight months since then, Wild Poppies, a charity that matches donors willing to pay for music or art lessons or supplies with talented Roma children whose families can't afford their artistic instruction, has expanded nationwide, launched an innovative new collection campaign, and experienced plenty of smiles and tears along the way.

Wild Poppies' first full year kicked off with a tour that brought Klimo's portraits from the capital to Rimavská Sobota and Prešov, which lie in the regions where most of the enrolled children live. While the programme had to wait for resources from its partners before expanding nationwide, it checked on the progress of the 31 children who had been selected the previous year.

"With very few exceptions, the children were doing great and had improved tremendously," Júlia Ledňová, programme coordinator for Pro Donum, which administers Wild Poppies, told The Slovak Spectator. "Their success lent support to our mission of breaking stereotypes by showing that children from the Roma community are not only talented, as many people might expect, but can be motivated to work very, very hard, even if they've never had a positive example."

Once it was ready to expand, Wild Poppies found new participants through the same method it had used the year before - by sending letters asking schools to recommend their most talented Roma children, who were then evaluated sociologically, financially, artistically, and psychologically before being invited to enroll in the programme.

The result is the addition of 22 talented artists, athletes, and students from across the country, who range in age from 6 to 17. Half of them have already been paired with a donor, and the others are expected to receive one soon.

So Wild Poppies started looking to the public to fund extra activities that would help the children develop their talents.

One of those activities is the Wild Poppies Summer Academy, which took place in Topoľčianky earlier this month. The five-day event was a chance for the children to work intensively with accomplished instructors from their artistic field, with a few sports activities, day trips, and a masquerade ball thrown in for fun.

The academy's instructors included Laco Cmorej, a dancer seen on STV; Peter Adamov, a clasically trained singer who won the Coca-Cola Popstar competition in 2003; Pavol Breza, a guitarist who plays with pop singer Zuzana Smotanová; Alexander Kováč, a Roma violinist who's a member of the Budapest Gypsy Symphony Orchestra; and painter Gabriela Binderová. The surprise guest at the masquerade ball was Katka Koščová, the winner of the first season of Slovakia Searches for a Superstar.

When the summer academy opened, "some of the children were crying because it was the first time they were going to be away from home," Ledňová said. "But by the end, they were crying about having to leave."

The final day of the academy featured an open house, to which donors, family, friends, and journalists were invited to talk with the children and watch them show off what they had learned.

But some donors, like Lucia Hablovičová, a former model and current director of the Miss Slovakia pageant, who sponsors young singer Aneta Kováčová, knew about it without an invitation.

"She's been visiting Aneta and has become something of a family friend," Ledňová said, "so when we called her, she said excitedly 'Yes, I know. I've already made plans to be there'."

But Wild Poppies points out again that activities like the summer academy require funding from outside the programme's regular budget, which covers only certain expenses. So starting this month, it launched a collection campaign that uses billboards to advertise a new option - donating Sk30 by text message. The campaign lasts until the end of September.

"We set this up so people who don't have enough money to sponsor a child can still donate," Jozef Gryga, PR manager for Wild Poppies, told The Slovak Spectator.

Each billboard advertisement was designed by Vaculik Advertising to feature one of Klimo's portraits with a slogan across the bottom that's specific to the child shown.

"The campaign also aids us in our quest to break stereotypes by showing positive images of happy Roma children," Lucia Čierna, programme manager for Pro Donum, told The Slovak Spectator. "We do that by using a slogan that first expresses the child's modesty with 'I'm nothing, just a dancer' or '... just a singer' and then focuses on who these children are, by adding things like '1.5 metres and 3 octaves' for one of the singers or '40 kg and 140 decibels' for one of the violinists.

"This kind of campaign is vital if we want to send children from Wild Poppies to events like the Viva Musica! Festival, which invited us to play, but we couldn't afford it, so we could only send two."

As the summer draws to a close, Wild Poppies plans to reasses its progress and strategise for the coming year. But with interest in sponsoring a child coming even from Slovaks living abroad and foreigners living in Slovakia or the Czech Republic, the future looks promising.

"One retired man from the Czech Republic used his savings to sponsor a child," Ledňová said. "He said he was at the phase in his life when it was time to do what's right."

For more information about Wild Poppies, visit www.divemaky.sk. To donate by mobile phone, Orange subscribers can send a blank text message to the number 806.